The day the Queen met Duke

In October 1958, Duke Ellington performed at the Leeds Music Festival, sharing the billing with other stars of the jazz world such as Humphrey Littleton, Cleo Laine and Johnny Dankworth. Prince Philip was present and a big fan of Ellington, having been introduced to his work by his father, who had a number of the great musician’s records.

After the show, the guests and performers were invited to meet the Royal Family. Ellington was last in line and had an audience with the Queen, who had not made it in time for his performance and indeed was disappointed by this; she had, in the past, enjoyed dances with her husband to the likes of “Take The A Train”. Duke Ellington was immediately inspired by their meeting and vowed that ‘something musical will come of this.’

According to Ellington’s son Mercer, his father made a start on the new work as soon as he returned to the hotel where he was staying. With help from Billy Strayhorn, his great collaborator and friend, “The Queen’s Suite”, as it became titled, was written, composed and arranged with more time and effort being input than any other of his work during that period. Inspirations also came from nature and based upon the Dukes observations of frogs, birds, lightning bugs and the Northern Lights. 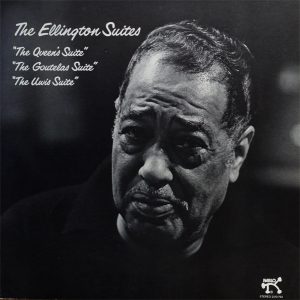 In early 1959 three recording sessions took place and a single disc was produced, which was then secretly delivered to Buckingham Palace for the Royal Family only. It’s not known whether Her Majesty listened to or enjoyed the recording. The musicians for this record were: Duke Ellington on piano; Jimmy Woode in charge of the double bass; Jimmy Johnson on drums; Britt Woodman, John Sanders and Quentin Jackson on trombones; Cat Anderson, Clark Terry, Shorty Baker and Ray Nance on trumpet; with clarinet and saxophone duties covered by Harry Carney, Jimmy Hamilton, Johhny Hodges, Paul Gonsalves and Russell Procope.

Over time, the main track around which the whole suite centred, “The Single Petal Of A Rose” was played as a stand-alone piece at Duke Ellington concerts; this increased as people liked it and requested it. However, he never played the whole suite nor revealed the secret royal
connection, this becoming common knowledge only after his death in 1974.

The full track listing for “The Queen’s Suite” is: Sunset And The Mocking Bird; Lightning Bugs And Frogs; Le Sucrier Velour; Northern Lights; The Single Petal Of A Rose; Apes And Peacocks

Two years after this, “The Queen’s Suite” won a Grammy, when featured as the A side on the 1976 album released by Pablo Records, entitled “The Ellington Suites” and also featuring on the B side, “The Goutelas Suite” and The “Uwis Suite”.

The eminent double bass player and band leader Gary Crosby revealed earlier in 2022, whilst on Cerys Matthews’ Radio 2 Blues show, that when the Queen awarded him the Queen’s Medal For Music in 2019 and the two conversed about music, she said how she loved Ellington and even explained to him about the amplification of instruments, which he was so surprised by. Yet another example of what a remarkable woman and monarch she was.