In these times of a sometimes hopeless horizon for musicians due to the more-or-less cultural shutdown for live performances in clubs and concert halls, a revival of prescient jazz-gloom groups like the Kilimanjaro Darkjazz Ensemble and their similar offshoot, the Mount Fuji Doomjazz Corporation (both led by musicians from Utrecht, Netherlands) should be no surprise. 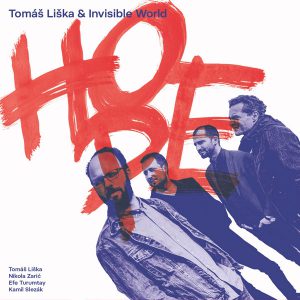 However there must always be hope on the horizon and there is surely “Hope” to fall back on most notably so in the recent album and CD release by Tomáš Liška & Invisible World. If not in sound, the spirit of this group also reflects back on a prescient recording from 1958: George Russell and his orchestra’s “Jazz in the Space Age” featuring Bill Evans at the piano.

“Specifically, it’s going to be a pan-rhythmic, pan-tonal age. I think that jazz will by-pass atonality because jazz actually has roots in folk music, and folk music is scale-based music; and atonality negates the scale. I think that jazz will be intensely chromatic; but you can be chromatic and not be atonal. The answer seems to lie in pan-tonality. The basic folk nature of the scales is preserved, and yet, because you can be in any number of tonalities at once and/or sequentially it also creates a very chromatic kind of feeling, so that it’s sort of like being atonal with a Big Bill Broonzy sound.”

So it is within this context that Tomáš Liška & Invisible World is introduced as led by the composer and accomplished acoustic, electric and piccolo bassist Liška from Prague, Bohemia. With no roots in the Blues, his group is a swaggering and refreshing mix of jazz meets chamber music unit with a young and wider European line-up; besides the two Czechs, Liška and Kamil Slezák (drums, cajon and other percussion instruments), there are three Vienesse-based musicians: the Serbian-Austrian Nikola Zaric on accordion and voice), Turkish Efe Turumtay on violin and voice, and Kurdish Sakina Teyna though she is listed as “voice” on only two tracks.

Although the album lists all of them including Liška as vocalists (or actually “voice”), and Teyna as solely a contributor for her voice, the voices are most noticeable as chants on the end of their most upbeat track “Dunga Runga.” Otherwise, these voices exist more like extended hums and whispers into the wind on a few songs. And so, Invisible World’s magic is both a strange and subtle concoction as they are essentially an improvisational unit with influences ranging from contemporary jazz to jazz-rock (though the classic “rock” sound is only thanks to Slezák’s solid drumming), along with Slavic modern folk (Central-European Czechs and Slovaks with the South-Eastern European Balkans) and a lingering Ottoman or even Anatolian sensibility.

Such cross-cultural pollination of improvisation, jazz and folk music is prevalent in West European jazz groups, but thus far not as much bridging Bohemia, Serbia and Anatolia (all formerly regions with centuries under the Austrian Monarchy and/or Ottoman Empires respectively) as in this group. Weaving these influences most impressively, “Frankie-Dedicated to Victor Frankenstein” has a hypnotic sway for the introduction with explosive interludes.

There also seems to be the influence of bandeneon-master Astor Piazzola and Argentinian tango, due to the classically-trained virtuosity of Zaric on accordion. And there is even a touch of Gato Barbieri’s soundtrack to the “Last Tango in Paris” particularly on tracks like the opener “Mafioso” and on another one of the several standouts of this recording, “Soundtrack.”

Although he is the leader of the group, Liška is not an ardent soloist, another feature of futuristic jazz. Though he is clearly the anchor of the unit and between the deep and steady basslines he guides the optimistic spirit of his fellow musicians. A proper tour for this group is unable to be confirmed. The more curious can only find “Hope” as it is released and available at Invisible Records, 2020. And let’s hope for an extensive European tour of this group in the near future.