The Netherlands has long had a strong Big Band culture sporting some of Europe’s most eminent large jazz ensembles who have garnered wide international acclaim. Based in Amsterdam and resident in one of the worlds best known temples of culture, The Jazz Orchestra of the Concertgebouw without doubt is one of these ensembles. Featuring the crème de la crème of Dutch jazz, the band has been putting contemporary big band music on the map since 1999, with concerts all over the world and programs celebrating the Dutch jazz heritage. 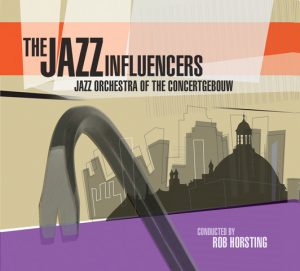 Recently the band released their latest album titled “The Jazz Influencers”, an album that shines a light on a new generation of great jazz musicians. While this may not in itself be a unique focus, the way the band went about it is. The orchestra invited some of their regular soloists from recent years, including Ben van Gelder, Tineke Postma, Simin Tander, Reinier Baas and Joris Roelofs, and gave them the opportunity to compose new pieces for the big band. These compositions were then arranged by Conductor Rob Horsting. The album was recorded over two days with a live audience at the end of February in 2020 in Amsterdam, just prior to the Covid-19 outbreak. “The Jazz Influencers” was officially released on October 15th.

With the impact of the pandemic halting almost all live performances the band found themselves in the now familiar position of having a new album out with nowhere to perform the music live. Literally “All dressed up with no where to go!” To remedy this, in December last year the band recorded a number of the tracks from the album live at Amsterdam’s iconic Bimhuis, all without audience and as you will see suitably socially distanced! We are thrilled to premiere these video’s here below.

The four video’s presented below are “The Peter Cat” by Maarten Hogenhuis, “Mynah” by Ben van Gelder, “Giant” by Gideon van Gelder and closing of the playlist is “Freya” by Tineke Postma. All arrangements are by Rob Hosting.

Hit the play button to view the videos

In the liner notes to the album Dutch music journalist Mathijs de Groot wrote: “The millennials grew up at the dawn of a new, digital age in which thinking outside the box is practically obligatory, and it is not limitations, but the lack of them that present new challenges. More and more jazz music is influenced by pop, hip hop and world music. Defining the genre by referring to overseas heritage no longer seems appropriate now that this art form ‘had already completed a full life cycle of creation, maturation, obsolescence, and revival,’ as music journalist Nate Chinen states in his book Playing Changes. Nevertheless, jazz is on the move. But where to?

The new album Jazz Influencers is looking for an answer, or rather answers, to that question: if anything, it is the great variety of musical characters on this album that speaks out. At the same time, they share a more inclusive approach to jazz as an art form, which you find in freer form structures, unexpected twists and turns and a wide range of color and sound, embracing both chamber music and minimal music.” Having enjoyed the album I could not agree more with this.

“The Jazz Influencers” is available at Amazon, Bol.com and all of the regular streaming services.

You can find more information on the The Jazz Orchestra of the Concertgebouw here at their website.