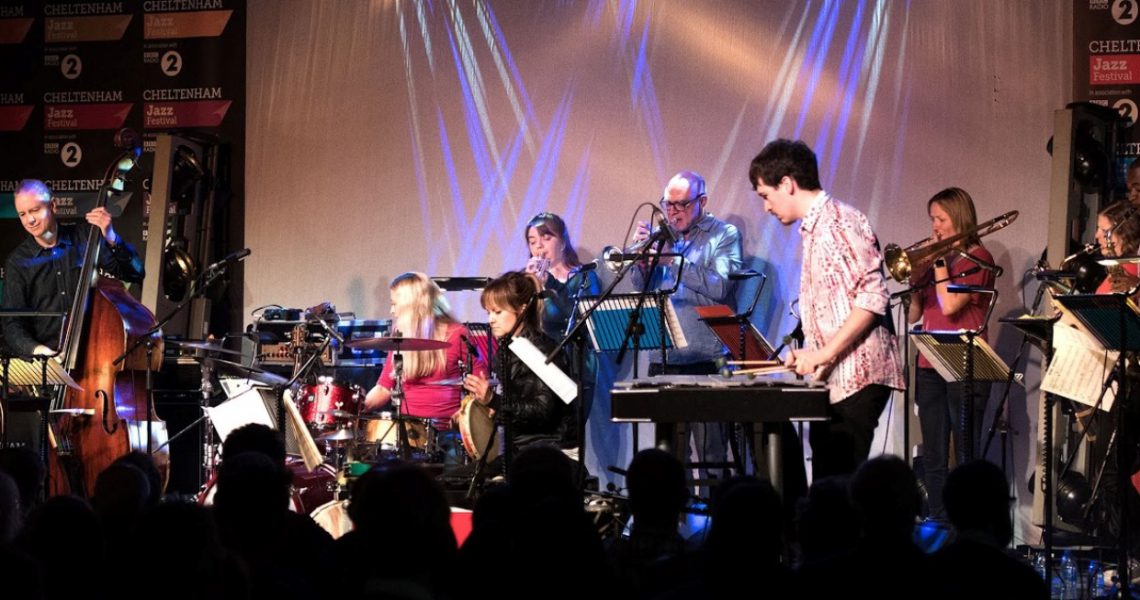 What do we want from a Jazz Festival? Great music, of course, a chance to hear stars from around the world, good places to stay, eat and drink. And perhaps also some feeling that jazz is not standing still or looking backwards, but developing, with new, younger musicians getting a chance to play.

The Cheltenham Jazz Festival has been running since 1996, taking place over the first weekend in May. Its success in recent years is largely thanks to the town itself, which has developed the infrastructure over many years for hosting festivals of all kinds, from literature to horse racing. It’s a very attractive destination in its own right, consisting of miraculously preserved eighteenth century buildings, elegant tree-lined squares and a huge number of bars, hotels and restaurants.

Last year the weekend of the Jazz Festival marked the beginning of a blazing Summer that lasted uninterrupted until September. This year temperatures were back to normal for the time of year (i.e. cold) but thankfully the sun shone for much of the time, bringing out hordes of jazz fans and curious onlookers alike. Organizers Tony Dudley-Evans and Ian George, and specifically Head of Programming Emily Jones, once again booked some big names, including: Kandace Springs, Sergio Mendes, Abdullah Ibrahim, Joshua Redman, Madeleine Peyroux, Jamie Cullum and Gregory Porter – the last two of whom also serve as “artistic curators” for the Festival.

But there’s also a big emphasis on encouraging new talent: when you walk around Cheltenham during the Festival, you can see people playing music on every street corner, and bands performing at bars and restaurants right across town. On the Festival site itself is the Free Stage – a large tent around which huge crowds gathered this year to hear up-and-coming acts like Lydian Collective, Ben Cipolla and Josh Scofield. Jazz education is another important part of the Festival. 600 primary schoolchildren (aged from 5 to 11) are invited each year to the Concert for Schools for their first experience of jazz. Older students are invited to play on the Free Stage and – if they’re lucky – to perform as support acts to big names appearing at the Town Hall.

As usual, the Hotel du Vin hosted the Festival’s late night jam session, which takes place throughout the weekend. In 2018, Kamasi Washington made his way down the spiral staircase to the hotel’s basement lounge. This year saw an epic Friday night saxophone battle between Tivon Pennicott (Gregory Porter’s saxophonist), Julian Siegel, Paul Booth and Soweto Kinch, during which a rendition of Joe Henderson’s Inner Urge lasted 25 minutes. Porter himself turned up at 2 am on Saturday, and Sunday night was enlivened by contributions from two pianists – London-based Sam Leak and local boy Tommy Scott.

As for the main acts at the Festival, there were many highlights. Two of the most exciting gigs were staged in a department store basement – low-ceilinged, low-lit and standing room only. This meant that only 10% of the audience could see properly, but it didn’t seem to matter: on Friday night, young tenor saxophonist Nubya Garcia, a graduate of Tomorrow’s Warriors, produced an electrifying, emotional set that gave you the feeling you were witnessing something new and exciting, as if you were hearing Charlie Parker at the Savoy Ballroom. In this case, of course, there was no swing and no ballads: many of the tunes were fast sambas, but the sounds of contemporary London were in there too – some reggae, some broken-beat. The best tune of the night was Source, based on a reggae rhythm and taken into a new dimension by Garcia’s brilliant pianist Joe Armon-Jones, who fronted his own band the following night.

Armon-Jones, another Tomorrow’s Warriors alumnus, is also a member of the Ezra Collective. At Cheltenham on Saturday he played a set just as energetic as Garcia’s, his band including Ezra saxophonist  James Mollison , as well as trumpeter Ife Ogunjobe, bassist Daniel Kasimir and drummer Morgan Simpson. The band’s rhythmic style was similar to Nubya Garcia’s, and as well as a conventional Fender Rhodes sound, Joe Armon-Jones was able to coax an extraordinary range of noises from his Nord keyboard – squawks, washes, dub echo and sepulchral reverb – all in rapid succession, as the mood took him.

Most modern jazz usually includes moments of “out” playing. Not so for Garcia and Armon-Jones, with whom the melody is rarely dislocated from the underlying harmony. In many ways, this Quintet sounded quite conventional in its use of trumpet and tenor sax, with themes either harmonized or in unison. And all the way through, the music was driven by the furious, attacking drum work of Morgan Simpson, a whirlwind of manic energy – but a whirlwind harnessed and controlled at all times.

Earlier on Saturday, two jazz legends had played in the Festival’s largest auditorium, the Big Top, which this year was 50% bigger than in previous years. Although both Sergio Mendes and Abdullah Ibrahim made satisfying music, the contrast between them could hardly have been greater. Sergio Mendes needs no introduction here: I have never seen him perform live before, but I was strongly reminded of the dramatic effect that he had on the whole world in the mid-1960s. The Brazil that he represented then, and represents still, has no history of military dictatorships or fascist presidents or environmental destruction; it is a Brazil of sunshine, beaches and glorious love affairs. Mendes and his band Brasil 66 accompanied an explosion of optimism – hits like The Look of Love, the waltz-time version of  Fool on the Hill, and above all  Mas Que Nada, formed part of the soundtrack of that iconic decade.

This was a slick, highly professional show. Mendes and his band of five Brazilians and four Americans played all the above-mentioned hits, as well as Magalenha, Waters of March, The Girl from Ipanema and Agua de Beber. With one exception the numbers were kept short, with little or no improvisation. The emphasis was on the vocals: as well as two female singers (including Sergio’s wife Gracinha), there were four other vocalists in the group. The biggest reaction of the night was for percussionist Gibi dos Santos, who was given a lengthy solo spot, during which he played a variety of instruments from shekere to pandeiro to cuica (that’s the one that chirrups like a bird). It was a joyful gig, the one out-of-place tune being Never Gonna Let You Go, a hit from the 1980s, which sounded a lot less like Sergio Mendes than any generic power ballad of that era. 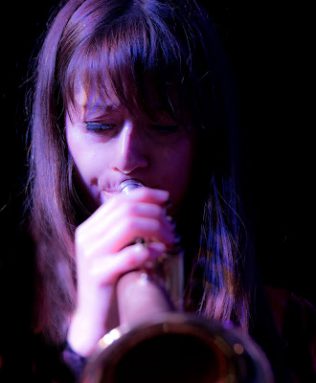 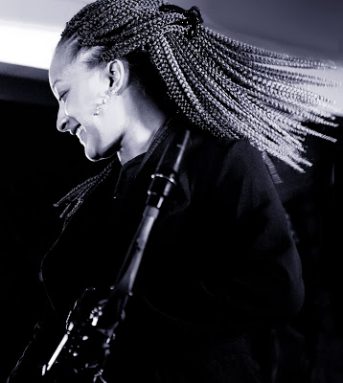 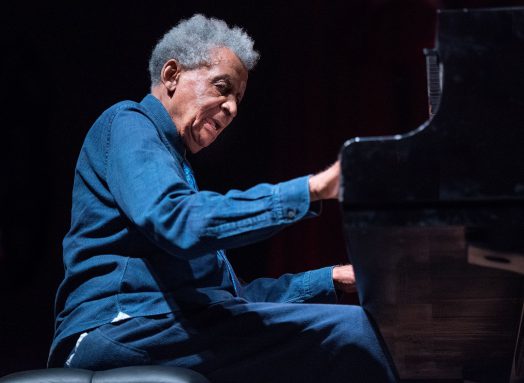 Abdullah Ibrahim, here performing with his long-standing backing group Ekaya, has made a quiet, contemplative African contribution to jazz; he uses a lot of simple major and minor chords, and often sounds quite “classical”. But there was something odd about this gig: to begin with, the venue was half-full (or half-empty, depending on your point of view) – which was surprising, considering Ibrahim’s reputation. Secondly, he spoke not one word to the audience, leaving us to wonder what he had just played, or indeed who had just played it. Thirdly, the entire performance was extraordinarily quiet. Sometimes Ibrahim tinkled away on solo piano, while outside you could hear not only the usual ambulances screaming past with their sirens on, but a barking dog, music drifting across from other gigs, and even people chatting outside. A club setting would have been far more appropriate for this style of music, in which Ibrahim often stopped playing while the rest of the band (three saxophones, trombone, bass and drums) carried on. The only tunes I recognized were Sotho Bluefrom his album The Mountain, and Thelonious Monk’s Rhythm-a-Ning. It was all very beautiful. But strange…

On Sunday the Jazz Arena played host to trumpeter Yazz Ahmed and an 11-piece ensemble for a performance of her Polyhymnia suite. This is divided into six longish pieces, each one dedicated to a notable woman, including the civil rights activist Ruby Bridges, Saudi Arabia’s only female film director Haifaa Al Mansour and veteran British jazz saxophonist Barbara Thompson.

Ahmed’s music has been described as “psychedelic” – perhaps because she uses electronic effects, combining them with the distinctive rhythms and modes of her part-Arabic background. But for the most part, her brilliance lies in her gift for the more familiar skills of melody and arrangement. Polyhymnia is a testament to Ahmed’s mastery of these. She made full use of the large band available to her, which included some of the best young musicians in UK jazz, including Naadia Sheriff on piano, Josie Simmons on baritone sax, Alexandra Ridout on trumpet and Ralph Wyld on vibraphone.

In One Girl Among Many, a piece dedicated to the Pakistani feminist Malala Yousafzai, Ahmed has taken extracts from Yousafzai’s 2013 speech to the United Nations and used the rhythms of the words to create musical phrases. The words are also used in spoken form, my own favourite line referring to the Taliban, who tried to kill Yousafzai: “They are afraid of women.”

The bus that Rosa Parks famously rode on while refusing to give up her seat to a white person was numbered 2857. This is why another of Ahmed’s pieces, dedicated to Parks, was titled 2857. It began with a slow march, accompanied by mournful solos from George Crowley on tenor and trombonist Carol Jarvis. Using some kind of electronic trickery, Ahmed then built up a loud rumbling effect that sounded like the engine of the bus.

This was complex music, that even while I was listening to it, made me wish I could hear it all again. That wish will be granted when Polyhymnia is finally released on CD later this year.