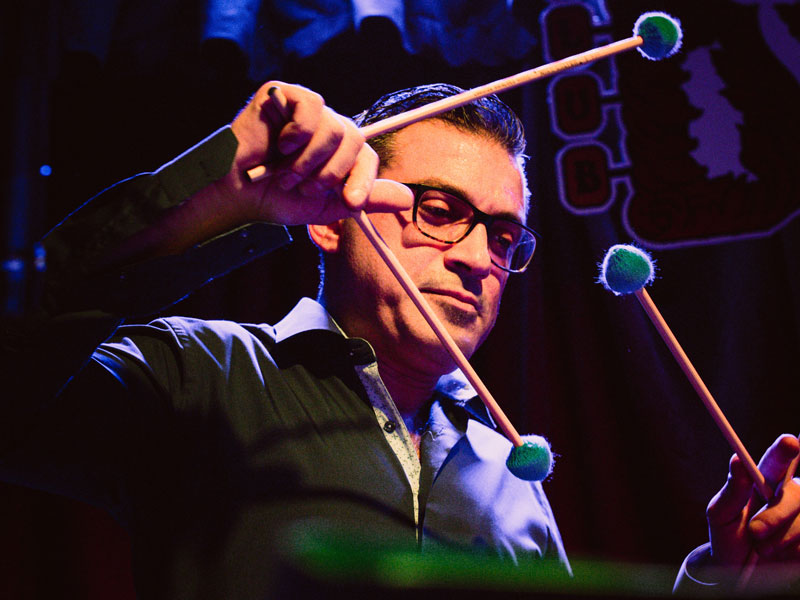 Born in Kozani, Greece, Christos Rafalides can’t remember a time where he wasn’t surrounded by music. His older brother led him to piano at the age of seven and at fourteen he began studies in classical percussion before touring Greece with various Jazz groups.

In the early 90’s, Christos received a scholarship from Berklee College of Music and moved to Boston. After graduating he moved to Manhattan where he studied with acclaimed jazz vibraphonist Joe Locke. It was in this period he began to perform on the New York City jazz scene alongside artists such as Ravi Coltrane and Antonio Sanchez.

Christos found his personal voice when he established ‘Manhattan Vibes’, a band that has appeared at numerous New York’s cutting edge venues including the Blue Note, the Jazz Standard, Smoke Jazz Club and Dizzy’s Club Coca Cola. The self-titled CD ‘Manhattan Vibes’ with John Benitez on bass, Steve Hass on the drums and legendary trumpeter Randy Brecker as a guest star, was rated as one of the top ten recordings of the year by Jazz Times in 2002.

Last year, Christos released his latest Album “Near and Dear” featuring Mauricio Zottarelli on drums with bass duties split between Mike Pope and Petros Klampanis. I recently sat down with Christos to discuss his early days in the New York jazz scene, The latest album and his vision of the vibraphone in the jazz trio format.

Andrew Read: Christos, thanks for taking the time to speak with us. I’d like to start by asking you a little about your formative years as a musician. You started your career as a classical percussionist, what prompted your switch to jazz?

Christos Rafalides: Indeed, classical percussion was the starting point. However, I find jazz fascinating in the sense that you are totally in control of the final outcome: you “design” the music in your head, according to your mood, the circumstances (depending on whether you are in the studio, at a live gig, a concert) and then possibilities are endless! It was also the groove, as a main component of jazz music, that I found so attractive, and finally the vibraphone itself, which has a prominent position in this genre and plenty of space for expression.

AR: A scholarship to Berkley brought you to the United States and after completing your studies you moved to new your to further your studies at the Manhattan School Of Music with Joe Locke. In these early days in New York you worked with Ravi Coltrane, Antonio Sanchez, Donny McCaslin among others. Coming from Europe, what challenges did you find in breaking into the NYC scene?

CR: I consider my studies with Joe Locke the highlight of my academic years, as he induced me to the cutting edge New York jazz “language”. Playing with some of the most talented musicians of this scene, and hearing their level of mastery, only made me want to become even better, to push myself further, to raise the bar, which meant I had to put in a lot of work. The challenge was that NY can easily distract you, and you can get carried away by everything that is going on around you, so you need to stay focused and practice, practice, practice.

AR: Your relationship with Joe Locke goes further than just a student teacher relationship and eventually led to the recording of ‘Van Gogh by Numbers.’ Can you tell us about this project?

CR: Joe has been a teacher, mentor and a dear friend. The timing of “Van Gogh by Numbers” was of essence, as our collaboration signaled my passing into adulthood and my transition from student to young professional. The project itself was demanding: we wrote music specifically for the duo and after we recorded it we took it on the road, and it was a unique experience playing with a world renowned vibraphonist. It was still a music lesson, but on a real stage! 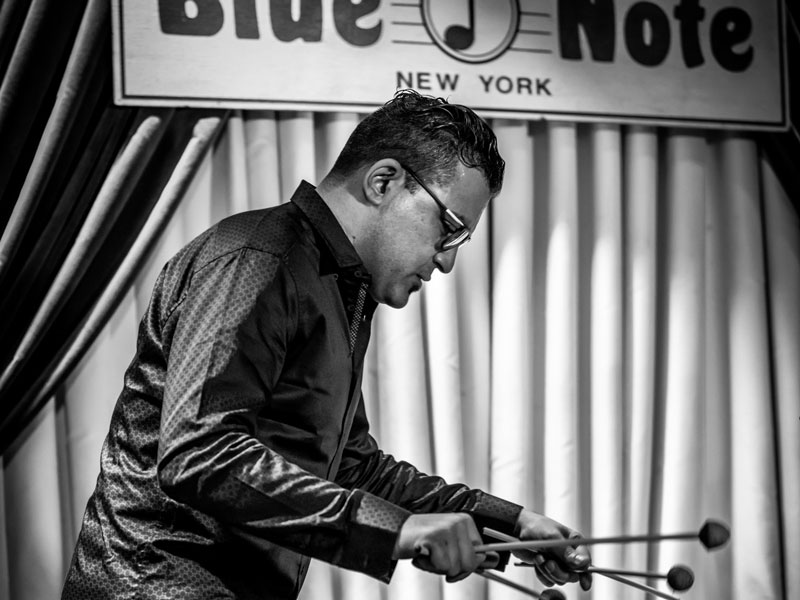 Christos Rafalides live at the Blue Note in New York

AR: Let’s speak about your latest album “Near and Dear”. As the title suggests the repertoire includes music that is near and dear to you and as you said “represents my induction to the world of American music, the world of jazz.” You also went on to say that the process was challenging. What were these challenges and how did you overcome these?

CR: Releasing a new CD is a very personal process for every artist, it comes from deep inside and carries a part of your soul. “Near and Dear” is comprised of two separate sessions which were recorded 4 years apart, in different studios and with different bass players: Mauricio Zotarelli and myself were in both sessions, Mike Pope and Petros Klampanis were the bass players, and thanks to technology they both play in one of the tunes. So, merging the two parts into a homogeneous sound was key to making the CD what it finally ended up being.

AR: The Trio format is common in the jazz world, yet a trio based around the vibraphone is less common. Why do you think this is and do you perceive the format differently to the Piano or Guitar Trio format?

CR: Spot on! I always enjoyed being part of the rhythm section, so building a trio around the vibraphone made total sense to me. The sound and the way you approach the vibraphone in such a setting are totally different, compared to playing within a quartet with piano or guitar. A trio gives you more freedom, having control of the harmony, so at the end of the day, it all comes down to expression!

AR: While you’ve been playing live in trio settings for many years yet this recording I believe is the first time you have recorded in this format. Is there reason for this?

CR: Timing is an interesting element… Even though I have always enjoyed playing in a trio setting, I never felt a reason strong enough to “document it” and make a statement, beyond having fun. “Near and Dear” represents the moment in time when, after years of hard work, I felt that I had finally achieved my own, personal sound, with my trio!

AR: The album features Mauricio Zottarelli on drums with bass duties split between Mike Pope and Petros Klampanis, all three musicians with highly diverse backgrounds not only in jazz but also Latin and World music. How did their input effect the overall sound and direction of the recording.

CR: This is exactly why I like playing with diverse musicians: we all get exposed to each-other’s culture and musical backgrounds, so the final result is a combination of sounds, emotions and personal stories. New York to me represents all that, it puts me in a place outside my comfort zone and when you are outside the zone, you have to think and when you think you innovate and create!

AR: Earlier this year you did a number of concerts back in Greece. Can we expect to see the trio in the near future in Europe?

CR: We are really looking forward to taking the trio on the road! We are currently working on a European tour for late November/early December and all cities/dates will be posted on my webpage and social media.

AR: I’ve asked this question a great deal in recent interviews and it’s provoked some rather interesting answers so far, so here I go. What are your thoughts on the state of Jazz music today and where do you see the future of the genre?

CR: Nowadays, everything is centered around image, so the magic of sound itself comes second, if not third. If we go back to listening with our ears and not our eyes, then jazz will probably get more traction. Undeniably, music will always be produced and is now, more than ever, available through so many channels, thanks to technology. On the other hand, we have socially/culturally reached rock bottom, so good music will either be depreciated as “un-necessary”, or become our salvation as a beacon of hope and a form of free expression.

AR: So to finish up, What’s next for Christos Rafalides?

CR: The next project is called Wabi Sabi and has been in the plans for a long time. The music is already written, it sounds completely different to Near & Dear, featuring piano and vocals, and we are now working out the logistics, towards releasing it in fall of 2019.

More Information on Christos can be found at his website.

His latest Album “Near & Dear” is available at Amazon | iTunes