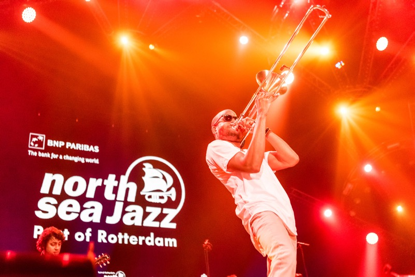 Following the unprecedented success of the NN North Sea Jazz Festival 2017, which saw 75,000 music fans enjoy performances from the likes of Wayne Shorter, Chick Corea, Norah Jones, Dianne Reeves, George Benson, Herbie Hancock, Robert Glasper, Kamasi Washington, Jamiroquai and Erykah Badu, the organizers have confirmed that the three-day event will return in 2018 and that Early Bird weekend tickets, which last year sold out within a month, will go on sale on Friday 17th November at 9 am.

Taking place in Rotterdam, North Sea Jazz is the world’s largest indoor music festival, attracting over 25,000 visitors per day and presenting over 150 concerts from an array of international star names from the worlds of jazz, soul, blues, hip-hop and beyond. The first wave of artists lined up for next year’s event, which will return to the Ahoy in Rotterdam from July 13th – 15th 2018, will be announced in February.

To get you in the mood here’s a little through back to last years festival.