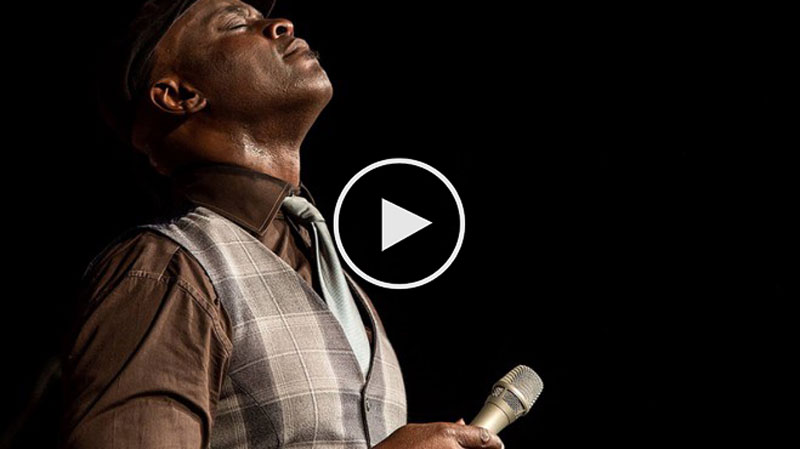 Ola Onabulé – Taking on the world, on his own terms.

Ola Onabulé is an artist who has a strong, loyal and constantly growing fan base. This isn’t just because of his musical prowess, beautifully crafted lyrics and the powerful impact of his live performances. It includes his attention to detail, producing a constant range of high quality albums which is the norm for this wonderful, friendly, gracious man. It’s also the fact that Ola’s authenticity makes him truly stand out from the crowd. You’ve only got to look him up on YouTube to get a sense of what I mean. All of this is achieved by Ola and a small core of dedicated industry professionals who firmly believe that the art form of Great music comes first. I had the opportunity to ask Ola some question about his summer of 2017 and what we can expect for 2018.

Before we launch into the interview, take a look at Ola live at St James Theater in London. This video is the first video of a 10 part series to be posted. 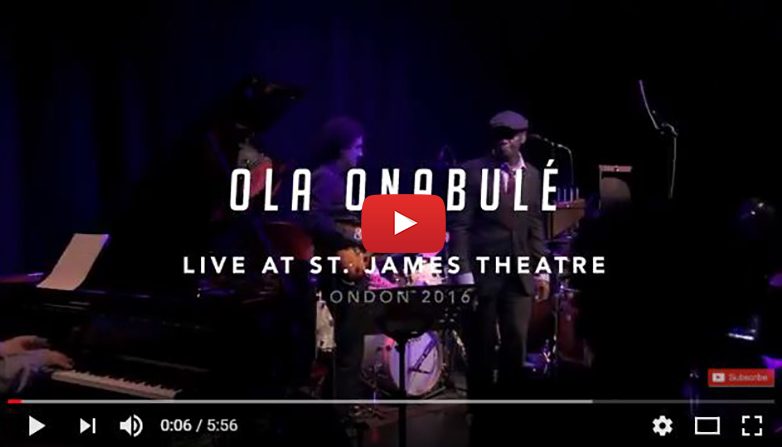 Nigel J. Farmer: Ola, you’ve just recently toured in the USA this summer and autumn, including performing on the main stage of the Washington DC Jazz festival. Share with us something of your experiences.

Ola Onabulé – We truly enjoyed playing the US Festivals this summer. I had a phenomenal (mainly American) band with me and because I arrived in the US almost a week before the 1st festival date in Washington DC, we got a chance to really get to know one another musically at great rehearsals and a thoroughly enjoyable club gig in Atlanta. By the time we got to DC we were well settled within  our comfort zone!

The fact that I am a new entrant into the US festival scene, playing original compositions, means that I walk out to audiences who don’t know much about my music or me. This can make the initial reception feel a bit cautious compared to the “outright adulation” (said in jest – ed) I command at home in the UK or in Europe, but, I treat the challenge of winning an audience over like a thrilling adventure and relish the euphoric sense of achievement one gets from turning a hesitant reception into, a beautiful shared experience and then a warm goodbye. Where we meet as strangers but parts as friends. That was certainly the case in DC where we had the added jeopardy of rain which also threatened to ruin proceedings, but we managed to keep our amazing audience with us throughout the inclement weather and turned the whole thing into a proper party. A most satisfying outcome indeed!

We also had an amazing time playing at the international Jazz festival in beautiful Lake George in Upstate New York.

NF:  You’re already well established in Europe, how important is the North American market for your continued growth as an artist?

OO: Oh, incredibly important. It is still amongst the largest, most inventive and vibrant arenas for contemporary music. America has so much music to gift the world and I consider myself a proud beneficiary of her gift. To have access to the American Market is to have access to the world commercially, but for me there is a powerful artistic incentive to seek a relationship with America as well.

I love the beautiful irony of art forms that have powerful roots in Africa, making the trip, in reverse, back from America to the continent from which they started a millennium earlier as rhythm heavy ceremonial incantations and praise songs. Especially in the middle part of the 20th century, when Jazz, Rhythm ‘n’ Blues and Gospel were mixing with traditional African genres to create new art forms that would go on to become classics in their own right such as Highlife Jazz, Township Jazz, Afro-beat and Juju music. I, in turn, experiment with these postmodern African hybrids, fusing them with my love of modern Jazz and Neo-Soul, using them to express my complex identity. So, naturally when the work is done I am very curious to discover what Americans make of this constant cross-fertilization of our shared heritage.

OO: Absolutely, there is already talk of performances in some of the renowned jazz clubs and arts theaters across the country early in the year and a push for more festivals in the summer. Confirmed dates include the famous Friday Musicale in Jacksonville, Florida in the spring.

NF:  You’ve also just made a whistle stop visit to Internationales Jazz festival in Leibniz, Austria, as well as recent performances at various well-known French Jazz festivals amongst them being the Saint Raphael Jazz Festival 2017, nestled between Nice and Monaco on the French Riviera. That sounds like fun in the sun! Tell us about it…

OO: Gladly! This summer has been one of utter hardship in which I have been obliged to perform in either the South of France, the wine making regions of Austria, or near the idyllic lakes of upstate New York a number of times. It is hardship on an unforgivable scale and I refuse to work like this!! They even had me singing on a stage facing the deep blue seas of the azures! Scandalous!!

Jokes aside, I feel incredibly lucky to find myself in the places I do. Writing melodies and words in your bedroom that you hope as many people as possible will hear and absorb is a humble pursuit that throws you no guarantees. I have not yet, and cannot imagine ever being inured to the wonder of performing my music on stages in parts of the world I never thought I would see in my lifetime. It’s a privilege and I feel very lucky indeed. 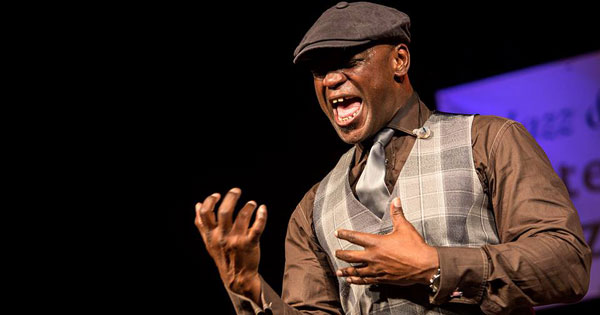 NF:   I also understand that you are performing in Paris in two key venues in mid Oct.- Sounds interesting, tell us about it.

OO: Yes, I am so pleased to confirm that my fabulous band and I will return to Paris for the first time in a few years to perform  two nights at the prestigious Club Etoile. Over it’s long history, the club has hosted such musical luminaries as Cab Calloway and Lionel Hampton. It’s always a thrill to be a part of such a story and leave one’s mark on such a venue.

NF: Now you’re a seasoned performing artist on large international stages, yet you also have played many more intimate jazz club venues. How do you adapt your performances to suit each setting?

OO: Learning how to “finesse the room” – as I have heard some of the old school musicians call it – is a skill one just has to learn on ones musical journey. Playing wall to wall, loud or overly energetic songs in a small intimate room to an audience of 150 people can be just as awkward as playing an entire set of elegiac dirges to a diverse outdoor summer festival crowd.

I learned these lessons over a long period of time by trial an error – from back in the day when I used to play solo guitar and voice gigs in jazz bars all the way to playing cavernous yet prestigious venues like the Royal Albert Hall – and I continue to learn with every gig. It’s a work in progress.

NF: In late 2016 you performed two special performances at the St. James Theatre, London. I understand Sennheiser who endorses you, recorded these concerts. The first video we have published on the website here. Can you tell us more of your plans to release the further videos…

OO: Yes, thank you for asking. I have had the honour of working with this most esteemed company, Neumann microphones for a good many years. They have supported me through many album recordings with some truly spectacular items that would normally be beyond the reach of mere mortals like me.

When we were offered the St. James Theatre show, my manager, immediately thought that its combination of great room acoustics,  intimate stage and smallish audience capacity (about a 120 max) could present a unique opportunity for a live recording which was something we had been hoping to do for quite a while. She reached out to our dear friends at Sennheiser/Neumann: Alan March and Andrew Lillywhite, who once again generously threw enormous support behind the project, bringing decades of live music engineering expertise as well as spectacular array of state of the art microphones and ancillary equipment. We later thought it would be remiss to have such a golden opportunity as this and not record visuals as well, so we got production crew – Light Storm Visuals to come along and film the concerts.

We will release each of the 10 songs that were featured in the concerts at fortnightly intervals and at some point yet to be determined we will release the entire concert. There are also plans to release the audio as a live album. So a lot of exciting developments ahead with this project.

NF: Endorsed by Sennheiser and ACS Custom, how important are these endorsements to you both as a musician and a producer?

OO: Oh very important, On stage, singers don’t have instruments and the attendant gear to lug around but they do need microphones to sing into and monitors to ensure they can hear themselves clearly, I am incredibly lucky that for many years I have had the support of arguably the two best companies in these respective fields. I use a Neumann KMS105 mic on stage, it is remarkable for the fact that  it produces a studio quality sound on stage and is particularly suited to my vocal range and style which involves a lot of scatting and experimental vocalese. In the studio, I rely heavily and exclusively on Neumann Microphones for my recordings. I record mainly acoustic instruments in my own facility and the addition of these tools just raises my game stratospherically! It means I increase my chances of creating albums that sound like they belong on the world stage. My ACS in-ear-monitors were introduced to me by the incomparable Andy Shiach, (CEO of the company). They are the closest guarantee I have of an infallible monitor sound on stage and I am totally and utterly addicted to them. Finally and undeniably, my association with companies like Sennheiser, Neumann and ACS also serves as a statement of intent that I want to strive to write the best albums I possibly can, not just artistically, but technically as well.

NF: Speaking of production, your current album ‘Its The Peace That Deafens’ – hails from 2015, can we expect a new album in the near future?

OO: Work has started apace on my next album, I am in the writing stage and about 15 songs have been amassed at this point. I am still being inspired to write more tunes. It is my habit to continue writing until I’ve exhausted my muse so to speak, I’ll then start the next stage which is production and recording. When finally, all the songs are recorded, I’ll chose the ones that are best suited for the impending project, So it is my hope that I will have a new album to present to the world sometime in the middle of 2018.

OO: Well the eternal quest has always been to keep the old flames lit whilst starting new fires further afield. So I hope that old fans will find new ideas to be inspired by,  in my new album.  New fans will find me and my work to the extent that they go in search of my 8 previous albums. Furthermore I am looking forward to taking my music to places I have not previously had the opportunity to as well as going back to the many places where we have already made friends.
See more great video’s by Ola Onabule on his YouTube Channel. Click below to visit his channel:

Ola Onabule will be playing in France next week. Concert details are below: