“Fig free” is the sixth album by the Polish guitarist Przemyslaw Straczek who has already notched up a remarkable touring history crossing the continents of Europe, Asia and South America.

When I first listened to this album I immediately noticed three key aspects. The first thing I noticed is that the CD is entirely built around original compositions, it’s a choice that I respect deeply for a number of reasons. How many times are we as musicians asked to play something the audience knows? It can be a challenge to you personality. In my opinion, I think presenting our own unique content can, in the end, make a difference in the longer term. 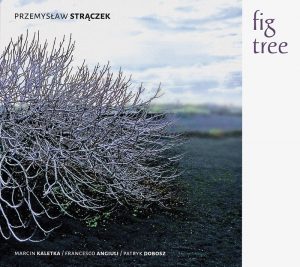 The second aspect concerns genre. Considering I hate to label music, we have to include this project into the contemporary and modern Jazz category; not only because the compositions are logical and compatible with the style but also because Straczek’s language is fully in line with the most famous guitarists in the genre. It’s contemporary in the sound of his instrument, the sound of the entire band and also the sound of the recording.

The third aspect to consider: When reviewing this album I didn’t focus a great deal on form (I suspect that even the compositional ideas went beyond this concept), and, I didn’t didn’t concentrate that much on the individual members of the band, how they played a particular solo or a chord voicing. For me, it’s definitely an album of atmosphere and colour where the whole id greater than the sum of it’s parts. The team is far more decisive than the single-player.

Throughout the album there is a lot of care taken with melody, something I really appreciate, but the collective performances always contain a surprise. So, what do I mean here? For example, sometimes the guitar takes a solo followed by the sax; one could say this sounds normal but on reflection you immediately realize that probably they changed something in the arrangement. It can be a pedal point where players express their individual qualities. Sometimes it is modal harmony. Sometimes they improvise together with the contribution of drums and bass who are always interacting. Sometimes the band takes a freer direction. The distribution of spaces is significant and each musician has the chance to develop their ideas and melodic material. I personally loved the bass introduction by Italian bassist Francesco Angiuli on the track “Dualistic” and the interplay with the guitar which flows into the melody.

Track 2, Szept, that for me is a classical example of atmosphere and free jazz. It reminds me, someway, of Sketches of Spain by Miles Davis or even the album Kind of Blue. But, the sense is that once again the band works together to generate climax, tension and release.

It’s an intense album, meditative and reveals the reflective soul of Przemyslaw Straczek and the strong relationship between the band members. I personally recommend it.