Erik Leuthäuser, In the Land of Irene Kral and Alan Broadbent: Live at A-Trane 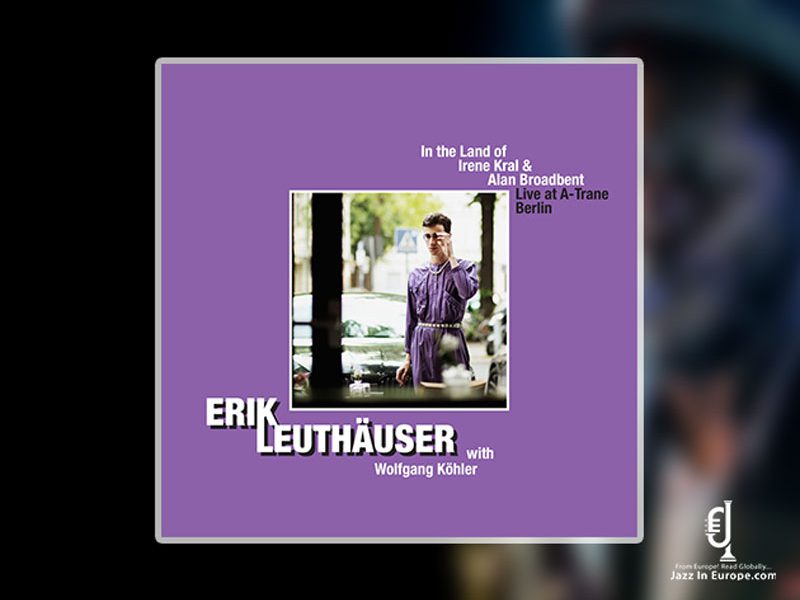 In one sense, classical jazz recordings are no different from ancient cities like Troy or Ephesus. Nothing gets truly lost under the ground, and everything resurfaces. In the mid-1970s, the American singer Irene Kral recorded the albums “Where Is Love” and “Gentle Rain” with the pianist Alan Broadbent. These two records, almost unsurpassable in their intimacy and authenticity, were then nearly forgotten for close to half a century. Together with pianist Wolfgang Köhler, the Berlin-based singer Erik Leuthäuser is now taking these wonderful gems up again. Over forty years later, and with a dazzling transparency, they allow the pieces to sound almost provocative in their very personal nature.

With this album, a dream project has come true for the dynamic singer. “Starting out from Susannah McCorkle, one of my favourite artists, I’ve been devoted to singers like Irene Kral for a long time,” says Leuthäuser. “I’m fascinated by this combination of jazz and cabaret, with singers who tell stories in their songs. Irene Kral and Alan Broadbent are particularly interesting because of their duo format. On both their records, the two musicians complemented each other wonderfully. But they also selected really special songs, some of which were previously completely unknown. That combination of song selection and interaction affected me a great deal.”

Erik Leuthäuser is known for his direct method when finding connections between differing states in the past, as well as working through various forms of the present. He has already ventured into that grey area between the appearance and reality of individual and societal self-images on his 2018 album “Wünsch” (with Greg Cohen, Kurt Rosenwinkel, Joey Baron, and others). Now, together with pianist Wolfgang Köhler, he sympathetically takes up the ideas of Irene Kral and Alan Broadbent and transforms them with moving passion into the present, without in any way detracting from his fascination for the historical background. Leuthäuser’s decision to record the songs while performing in front of an unprepared audience, rather than in a studio, definitely contributes to the intensity of the recording. “It was always a dream of mine to make a live record, and now finally, I feel like I’m vocally prepared. I knew that Wolfgang Köhler liked this duo as much as I did, and the Berlin jazz club A-Trane was the ideal venue.”

Leuthäuser’s communication with the audience is an important part of his message. In direct contact with concert goers, he becomes the compère of his own show. He prepares extensively for each song and tells the audience the stories behind them. In this way, the tale of the song unfolds like it would in a play. The two Berliners met as student and teacher in the city’s Jazz-Institut, and their respect for the material can be seen in the way in which they repeatedly reveal its connecting links with themselves. Leuthäuser and Köhler manage the balancing act of remaining faithful to the original interpretations while still injecting them with their own DNA. The singer in particular has not only involved himself with the personality of Irene Kral, but has also allowed her, in a figurative sense, to get involved with him. “In preparation for the CD, I listened to every possible version of the songs countless times. I let them flow through me and examined what it did to me. Which version do I like and for what reason? Finally, I just sang the pieces without thinking about it too much. That’s how I noticed the connections between Irene Kral and myself.”

With all the humility due in such statements, Leuthäuser also summons up the courage to comment on the songs. And it’s these assessments which give the album its tantalising liveliness. He leaves concepts such as traditional gender roles in the cocoon of their time, and distances himself from them in a charming manner, without ever denigrating or denouncing the songs’ intentions in any way. There aren’t too many live albums where you can hear statements like this. “Some songs, which I found great in terms of composition and interpretation, have lyrical passages that do not suit me as a person. Sometimes I found it necessary to discreetly change or comment on the text, and to put it in the context of its time. In such instances, to a degree, my intention was to highlight the difference between those times and today, and what I think about it. I think that’s the only way to make it exciting for the audience.”

Leuthäuser and Köhler aren’t trying to deliberately force some modern framework around the songs. Nevertheless, they succeed in bridging the gap in time because they face the past with their entire personality rooted in the here and now. Leuthäuser emphasizes that, for him, the songs were always very close to the present. He rarely had the feeling that one of the pieces would be out of place in the modern world. “The songs have a very different aesthetic than on my last album, but they are just as contemporary in their own way.”

While listening to Leuthäuser’s interpretations, one could believe that Kral and Broadbent only recorded the songs more than half a century ago so that the young Berliner could pick them up today. He has been enthusiastic about songs like this since his earliest youth, and his unique power of conviction is based on the fact that it feels totally natural for him to sing these pieces today.