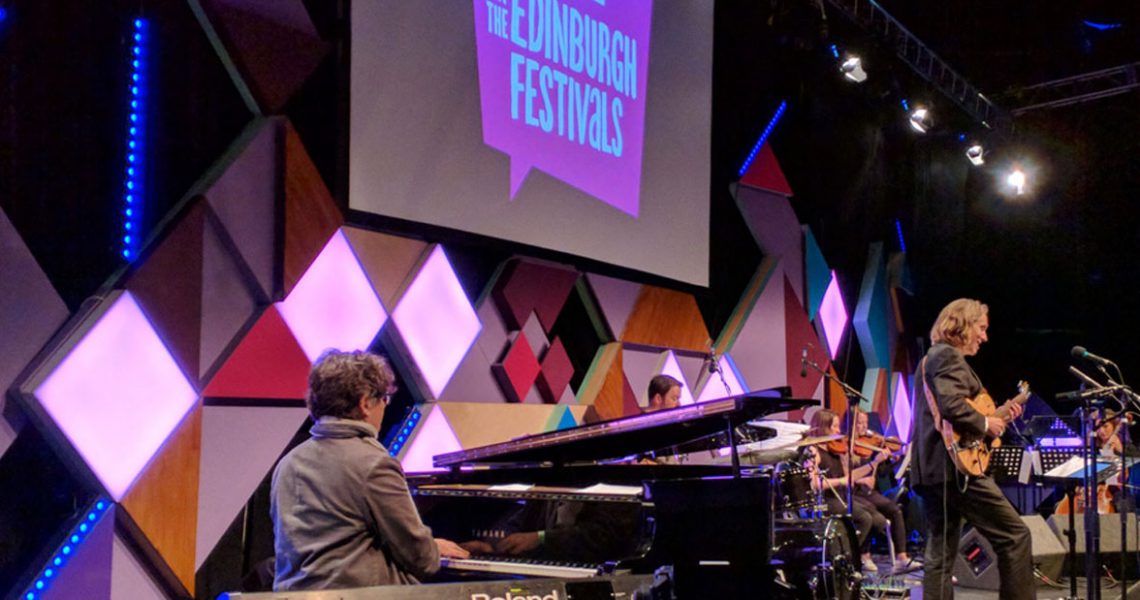 Canadian pianist Ron Davis will be one of the first musicians to appear in what is being described as the world’s first playable amphitheatre when his band SymphRONica returns to the Edinburgh Fringe in August ahead of a new album release this autumn.

The Pianodrome, which is made from more than sixty disused pianos, has been constructed on the Pyrus Lawn in the Scottish capital’s Royal Botanic Gardens especially for the world’s largest arts festival, and Davis is excited to be playing there during a run of twelve concerts in Edinburgh.

“The Fringe is crazy, with so many shows all vying for the audience’s attention, but at the same time, there’s an energy about Edinburgh in August that makes you want to be part of this mad, fantastic festival,” says Davis, who has the distinction of having studied piano with a teacher who was taught by both Oscar Peterson and George Gershwin’s brother-in-law, David Saperton. “Just being around so much talent and creativity at the Fringe can inspire you to try and take your music onto a new level but this new venue, where we’re playing a lunchtime concert as a trio on August 15 as a kind of taster to what we’re doing in Edinburgh generally, just makes the whole trip all the more intriguing.”

Toronto-based Davis formed SymphRONica in 2003, initially using diverse line-ups including jazz trio and full symphony orchestra. Then, following a series of symphony orchestra concerts, he decided to create a band that would allow him to blend the classical music he trained in with the jazz that was, and is, his passion without requiring a massive budget.

“I chose an octet comprising a string quartet with an electro-acoustic jazz quartet – piano, guitar, bass and drums – because I wanted to give all the players an input, and this configuration allows that,” he says. “I also liked the idea that, as an octet, we could include different styles of music and switch from a jazz standard or something based on I Got Rhythm to a folk tune more naturally than with an orchestra and yet still have a certain richness of sound.”

For their Scottish dates, which include concerts in North Berwick and Glasgow as well as Edinburgh, SymphRONica will be joined by Seonaid Aitken, the singer and BBC Radio Scotland jazz presenter who plays violin with the hot club styled Rose Room, winners of the Best Band title at this year’s Scottish Jazz Awards. The Scottish National Jazz Orchestra’s drummer, Alyn Cosker, who has worked with SymphRONica on the band’s two previous Edinburgh Fringe visits, will also be in the line-up.

“Generally we travel with a core of Kevin Barrett, who is one of Canada’s finest guitarists, violinist Aline Homzy and myself and pick up musicians locally,” says Davis, who releases SymphRONica’s new album, UpfRONt, in October. “We’ve always been lucky to get players with the vision to make the music happen but Alyn Cosker went beyond that. When we played the first number in rehearsal, Kevin and I looked at each other and mouthed ‘Wow.’ We didn’t have to tell Alyn what we wanted because he just made it his own. We’re looking forward to working with Seonaid, too, because as well as playing mostly viola in the string quartet, she’ll also sing, which gives us another dimension.”