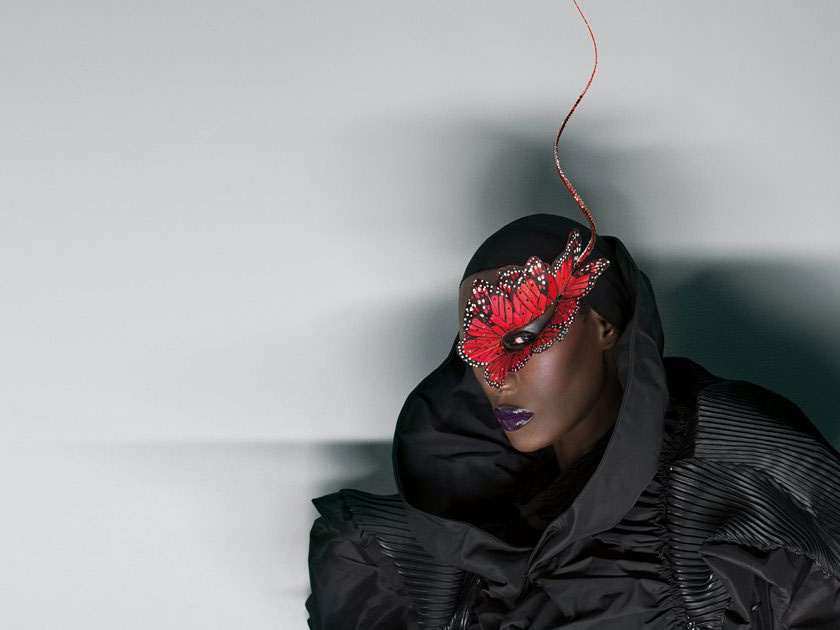 “Jazz” is how Grace Jones gently introduces and concludes the silky kind-of-jazz song “Victor Should Have Been a Jazz Musician” from her album “Inside Story” (1986) produced by Nile Rodgers of the disco-funk group Chic. This song is as close to jazz as Grace Jones gets throughout her career, similarly to Sade’s silky lounge jazz ballads with soaring saxophone solos, but with robotic syncopated Caribbean beats. Still, she is an occasional headliner for Rock and Jazz Music Festivals including this year’s edition of the Colours of Ostrava International Music Festival in Ostrava, Czech Republic.

Grace Jones is best known as an enigmatic and exotic diva with pumping underground dance tracks in the late 1970s and early to mid-1980s. Her best albums including “Warm Leatherette” (1980) and “Nightclubbing” (1981) featuring Sly & Robbie, the drum and bass masters of funky Jamaica. While for the Grace Jones Band now on tour, the bass grooves are left in the hands of Malcolm Joseph.

Celebrating her 70th birthday this May, Jones, born in Jamaica and initially a fashion model in Paris and New York, was ahead of her time and she is still a wildly innovative stage presence with decades of songs from disco to post-disco, new wave, art and electro pop, reggae and the rare foray into silky jazz.

Other notable groups with jazz leanings at the Colours of Ostrava International Music Festival this year include Calexico, a veteran Southwest Americana or “Tex-Mex” group meaning a blend of surf, Mexican mariachi, conjunto, cumbia, Tejano, jazz and American country-blues and instrumental indie rock. Tom Waits’ earlier records were also likely an influence and inspiration for Calexico, led by Joey Burns and John Convertino, who first played together in Los Angeles with the indie-band Giant Sand.

From Belgrade, Serbia, there is Naked, an energetic and youthful foursome of urban Balkan funk jazz with noticeable influences of New Orleans-Dixieland jazz and modern New Orleans funky brass and East European Klezmer. Balkan brass has its own distinctive flavor and Naked takes it back to origins.

Another highlight is the exceptionally exotic Dobet Gnahore, from the Ivory Coast. Her music is like a lullaby from another world—cheerful, yet passionate. Gnahore’s colorful beads, hair configurations, and her multi-colored hair, and face paint makes her look like a shaman, and her music is likewise, an electrifying charge and yet, it’s utterly contemporary. In 2006, Gnahore was nominated for the World Music Awards for “Newcomer,” and she shared the award for Best Urban/Alternative Performance at the 52nd (2008) Grammy Awards. She has come a long way since then even though it is mainly a man’s world when it comes to internationally-known African musicians and singers. Gnahore is an exception.

The Colours of Ostrava International Music Festival, in the northeastern region of the Czech Republic nearby Poland, is among the most prestigious summer music festivals in the region with top quality groups from multi-genres with a flare for the eclectic. It is also among the most family-friendly music festivals in Central Europe. Self-contained in an apocalyptic, industrial-era ruins of a coal-mining and iron works complex, the environs at night seems like a Blade-Runnerish city with busy and hidden quarters for readings and debates on social issues, art exhibitions, and with indoor and outdoor stages.

The Colours of Ostrava International Music Festival takes place in the Czech Republic from July 18th until the 21st, 2018