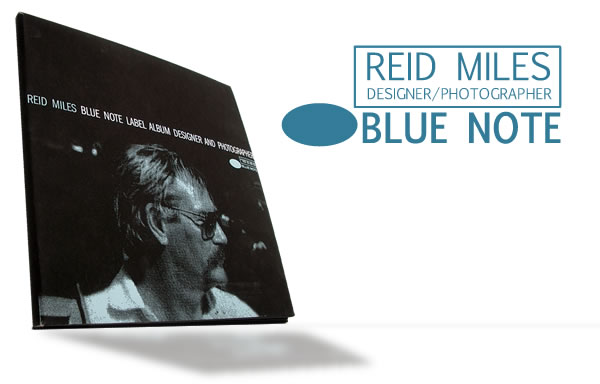 There is no doubt that the cover art produced by Blue Note Records in the 50’s and 60’s is an example of iconic graphic design. There have been a number of coffee table books produced featuring Blue Note cover art and elements of the style have been copied in countless cover and poster designs throughout the years and right up until the modern day. Over the years not much has been written about the designer Reid Miles in the jazz press and if you ask most jazz fans very few will even know his name. While this may be the case, it’s striking to note that most jazz fans have no problem naming their favoriet Blue Note cover or Franics Wolff photo.

Reid Miles was an American modernist designer and in the graphic design world often described as a genius of his time. Miles designed more than 500 covers for Blue Note Records and together with photographer Francis Wolff defined the visual branding of the label.

Reid Miles was born in Chicago on the 4th of July 1927. In the early 1930’s his parents divorced and he moved with his mother and younger sister to Long Beach, California. After high school Miles joined the Navy and, following his discharge, moved back to Los Angeles where he enrolled at Chouinard Art Institute as part of the GI Education Bill. Miles said the he was not really interested in Art and the real reason he enrolled was because he was dating a girl that was also enrolled. According to miles the relationship didn’t work out however by that time he had begun to enjoy his study. 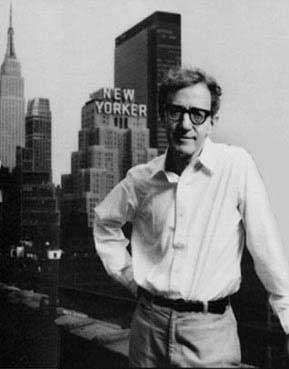 After graduating, Miles went New York to look for a job. Once in New York, artist, graphic designer, and jazz fan John Hermansader gave Miles his first job. Hermansader was one of Blue Note’s first designers, along with Paul Bacon and Gil Melle. Looking back at this era, Michael Cuscuna of Mosaic Records said, “ What John Hermansader and Paul Bacon really did was evoke the feeling of the music. They used everything from Bauhaus designs to things that were really otherworldly.” Graphic designer and jazz radio host, Angelynn Grant added, “When people think of Blue Note covers they think of Francis Wolff’s photography and Reid Miles design. But John Hermansader laid the groundwork that got them going along that path.”

In 1955, Blue Note records made the move to start issuing records in the 12 Inch Long Play format. It was in this period the Reid Miles was hired as Art Director. His main task was to adapt their existing catalog to the new format as well as produce design’s for the new releases. His first set of sleeves for the label included Sidney Bechet’s Jazz Classics Vol 1 (BLP 1201) and Milt Jackson and The Thelonious Monk Quintet (BLP-1509). 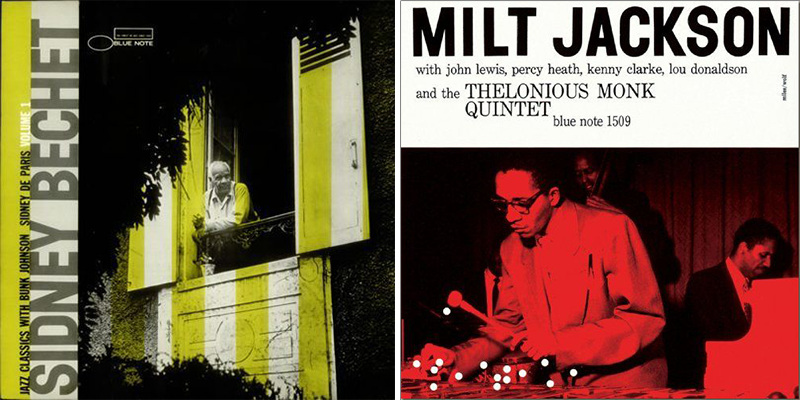 While in the early 1950’s Reid was not working full time for Blue Note records he often designed a number of covers on the weekends. While Reid was responsible for almost every cover he often out-sourced work to colleagues including a young artist who at the time was struggling for commissions named Andy Warhol. Warhol produced three covers for Kenny Burrell and one of the best examples of Warhol’s collaborations is Johnny Griffin’s “The Congregation”.

Although other artists, including Warhol, were creating for Blue Note, it was the work of Reid Miles that consistently laid out their work in a way that married the art and the sound of Blue Note into a consistent whole. In the book “The Cover Art of Blue Note Records” Felix Cromey wrote “Miles made the cover sound like it knew what it lay in store for the listener”.

Also a photographer, Reid would often take his own shots if he felt he didn’t have what he wanted from Francis Wolff. It was not always smooth sailing between Wolff and Miles and Wolff occasionally expressed frustration at the way Miles would crop is work in the design’s. Like Someone In Love by Art Blakey and the Jazz Messengers (B4245), Eric Dolphy’s Out To Lunch (B4163) as well as Herbie Hancock’s Takin’ Off B4109), are examples of the covers with photographs by Miles. 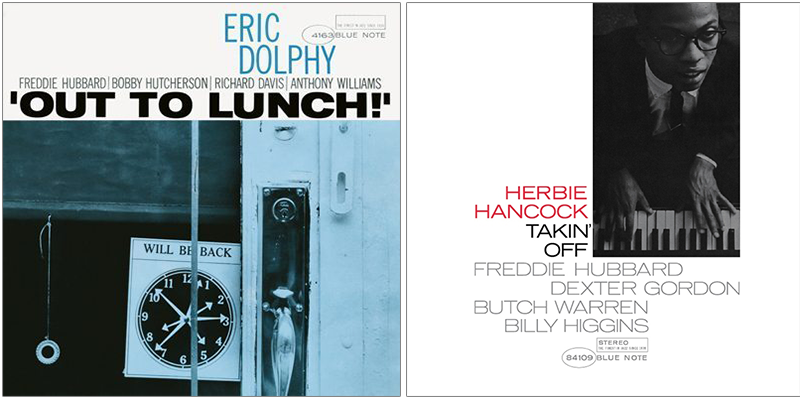 In 2015, designer Viljami Salminen wrote in a blog post that “During the Fifties, when the design industry was in flux, Reid Miles pushed forward the way the typography is treated with his bold, playful designs, creative use of typefaces, and his distinct preference for contrast and asymmetry.”

In an article published by Retinart, Alex Charchar wrote about Reid Miles work “They scream modernism in a way that few can compete against, often treating the typography as visual elements that can be broken apart, stacked upon one another in a playful way, blown up or shrunk down and brought together with the photography in a way that seems gravitational. The layouts are often evasively perfect as they look as if to lay any of them out even slightly differently would be to lay them out wrong.” I think he’s right on the mark here specifically the way he used typography as a visual element.

It’s clear the Reid Mile’s designs captured the feel of the time and helped form a visual representation of jazz that not only defined an era but also a genre. This is quite astounding when you consider that Reid Miles didn’t like jazz at all! Mile’s was a classical Music guy and as rumour has it gave many of the complementary albums he received away or even traded them in at the record store for classical recordings.

In an article on Computerarts.co.uk, Experimental Jetset floated the idea; “it is interesting to see that a designer who really managed to capture the essence of his time, was also, in a way, disconnected from that very essence … it is perhaps ‘distance’ not engagement that makes the designer.” There could be something to this.

It like to finish with this quote from Reid Miles.

“Fifty Bucks an album… they loved it, thought it was modern, they thought it went with the music… one or two colours to work with at that time and some outrageous graphics!”

Reid Miles is one of the unsung heroes of jazz history, while most people know the Blue Note story around Alfred Lion and Francis Wolff, the impact of Reid Miles is often only given limited attention. This is somewhat different in the Graphic Design sector where Reid Miles hold a place of honor and is seen as an icon of the Modernist era. Reid Miles passed away in California on 2 February 1993.