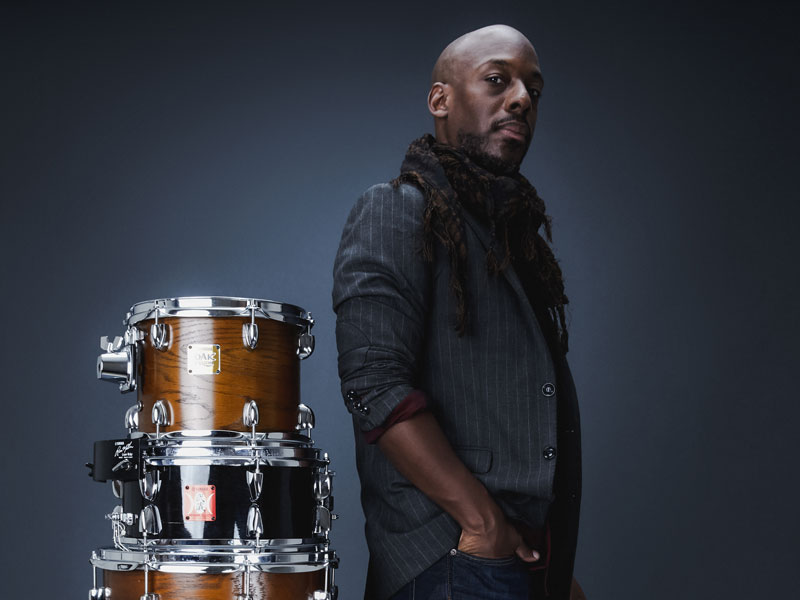 The month of April will see New York based Drummer, EJ Strickland tour Europe with his Quintet. Enoch Jamal (E.J.) Strickland has been described as a “world-class, world-traveled drummer, composer, educator, and artist” who has appeared on over 60 albums. The Miami native grew up in a creative household, where his dad was a percussionist in the Ft. Lauderdale Orchestra; his twin brother Marcus played the saxophone; and where E.J. beat on pots, pans, and tables until he finally got his hands on the drums. He was only in middle school, yet E.J. knew then that jazz was his calling.

After moving to New York to further his education E.J. quickly graduated into New York’s gigging jazz scene, playing early on with Russell Malone and Ravi Coltrane. Both artists proved to be big brother types for E.J., gently guiding him as he established his voice. “Russell really stressed the point that as a drummer, you’re supposed to make the music feel good,” he says. “I always try to remember what he instilled in me.” Ravi Coltrane lent a similar kind of open-ended guidance, telling E.J. to simply “find something” in the music. Just what that would be was up to him.

Variety—of influence and interest—might be the key word for E.J. in his creative approach. He studied both classical and Latin percussion, working early on with the great Cuban drummer Ignacio Berroa. “Growing up, we listened to all kinds of music in the house,” he says. “Miles, Stevie; just good music.” He’s applied his wide-ranging tastes to the artists he plays with today: funk and fusion with pianist Manuel Valera’s Groove Square; Latin jazz with tenor player David Sanchez; soul and R&B with harpist Brandee Younger; straight-ahead with alto player Sharel Cassity.

Strickland has built a successful career as a composer, bandleader, educator, and sideman. He’s toured, performed, and recorded with some of the greatest names in contemporary music: Cassandra Wilson, Terence Blanchard, Lizz Wright, Wynton Marsalis, George Colligan, David Gilmore, Vincent Herring, and Nnenna Freelon, to name a few. As a leader, he’s released two albums: 2009’s “In This Day” featuring his twin brother, Marcus Strickland, Jaleel Shaw, Luis Perdomo, and Hans Glawischnig in a blend of musical settings. His most recent release, “The Undying Spirit” positively glows… its success comes largely from the leader’s ability to inspire the best in his fellow musicians and demonstrate that a drummer-led jazz record gives listeners a unique opportunity to get their groove on.”

Editors Note: Keep an eye out for Andrew Read’s interview with E.J. Strickland to be published on this platform later this week.