An Interview with Aruán Ortiz 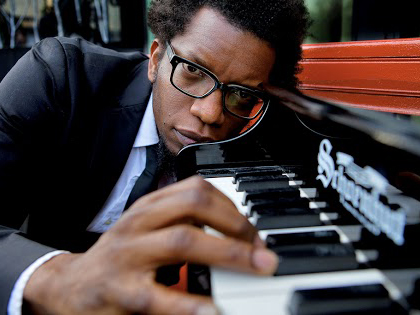 I was so impressed by Aruán Ortiz’ solo piano album, Cub(an)ism, that I felt impelled to interview him for this blog. He was very busy at the time with a concert tour, and then when he returned he became engaged in writing new pieces, thus it took about a month to get the answers sent to me, but as you will see in the following piece it was well worth the wait. I don’t think anyone has asked him quite the kinds of questions that I have; certainly, I haven’t found anything like it online; and Ortiz is such a highly creative and original musical mind that I think it important that my readers come to understand his aesthetics. Thus I proudly present to you pianist, composer and bandleader Aruán Ortiz! – This article has been posted courtesy of Lynn René Bayley of the The Art Music Lounge.

I noticed in the liner notes to “Cub(an)ism” that you originally started on the violin and then switched to viola although you also took the piano as a second instrument. I would guess, then, that your classical background influences much of your own music. Who were some of the composers whose music impressed you the most?

Aruán Ortiz: Yes, my classical background has informed my music in many ways. When I started at the conservatory I was 7 years old, and my training was in European classical music literature. I had the opportunity of being exposed to 20th century music there, and studied major composers such as Prokofiev, Bartók, Shostakovich, Khachaturian, Rimsky-Korsakov, Rachmaninoff, Scriabin, George Enescu, Dvo?ák, Penderecki, and Lutos?awski, among many others. The Cuban musical education system in those years used the Russian methodology. We had Russian teachers, books, recordings, and instruments and we heard mostly eastern European guest artists, performers, and orchestras in our cities.

LRB: I read in the liner notes that after completing your formal piano studies in Cuba, you went to Barcelona to pursue studies in jazz. What exactly drew you to switch your musical style?

AO: I don’t think I switched musical styles; I just try not to put any stylistic barrier in my mind. I grew up listening to local Afro-Cuban folk music in my home town and the last few years I have been very interested in the Afro-Cuban folk art. While I was studying at the conservatory, discovering jazz was a key moment in my life. When I was 14 years old, I started playing popular Cuban music at night in local groups in my hometown. At the same time I was playing Mozart, Brahms, and Bach with the viola during the day. I was also trying to transcribe Chick Corea’s solos. The differences in style weren’t a problem for me. I enjoyed being exposed to all those styles and learning from different sources. When the question, “Who am I, musically?” arose during my composing process, I just trust that my own reality would become part of the music and would answer that question. I have lived in different countries, been exposed to different music styles, and learned much from them. I would say the only thing that prevails is the need to dig into myself and discover what is the essence of my voice, without putting it in any category, label, or stylistic boundary. I like to express myself through the music and enjoy finding sources of inspiration from different places and artistic disciplines, and I try to integrate them in my own creative process.

LRB: Who were some of the jazz musicians (particularly pianists) whose work impressed you the most? I thought I heard some elements of Lennie Tristano and Bill Evans in your playing.

AO: It’s hard to say who impressed me the most, because at different periods in my life I leaned toward a certain way of playing and listening to different pianists to learn about the history of jazz piano. I guess you are not that far from your comment about the influence of Tristano and Bill Evans’ music in my playing, since for a while I was transcribing some Tristano solos and used them as part of my morning practice routine, making exercises from them. I also practice Bill Evans’ tunes sometimes, such as Turn Out the Stars, Very Early, Time Remembered and Orbits, which I consider masterpieces. However, my first influences were Cuban jazz pianists Chucho Valdés, Gonzalo Rubalcaba, and Emiliano Salvador. I was also attracted by the playing of Keith Jarrett, Michel Petrucciani, Kenny Kirkland, and Chick Corea, thanks to recordings (cassettes, back then) I got from musician friends in Cuba. After relocating to Spain, I had the opportunity to study jazz history comprehensively with Horacio Fumero, an Argentinean bassist who played with the great Spanish pianist Tete Montoliú for 20 years. He introduced me to the sounds of Art Tatum, Duke Ellington, Nat Cole, Fats Waller, Red Garland, Wynton Kelly, Sonny Clark, Horace Silver, Al Haig, Bud Powell, and Thelonious Monk. I learned many of Monk’s compositions and transcribed a lot of his solos. I really liked Monk for his angular playing, very precise rhythmic phrasing, and his exceptionally creative harmonic universe, which I still think is quite fascinating. When I moved to the U.S. in 2002, I was deep into the music of Herbie Hancock, Miles Davis, Andrew Hill, Herbie Nichols, and Cedar Walton, playing their repertoire and absorbing their jazz vocabulary. Later, I got interested in the music of the ‘60s, and I was focused on more avant-garde playing like Cecil Taylor, Sun Ra, Jackie Byard, Paul Bley, Muhal Richard Abrams, Don Pullen, etc. These pianists, one way of another, have made a huge impact on my playing, shaping my jazz approach, and my understanding of the nuances of this art form.

LRB: Even in your trio CD, “Hidden Voices,” I heard a strong proclivity towards classical form. Do you generally work from the premise of a structured piece first, then add the improvisation, or do you begin improvising and then create the form around that?

AO: I usually incubate an idea, or theme based on what I might be working on at that moment. Although I don’t have a preconceived way of writing, I do like to work on the same material and address it from several angles, making countless variations, finding new themes, and new information—harmonic structure and even rhythmic pulses—during the process. I also like to translate into music, non-musical concepts and work with them, the same way. I’m not interested in familiar chord changes, I avoid easy piano “chops” and getting into dazzling piano playing. I really enjoy getting inside the chords and decontextualizing them, generating other sonic textures from them, and I improvise those structures, deconstructing the melody-solo-melody out form, present in so many mainstream jazz pieces and recordings.

LRB: One of the things I noted in both albums was that you do not use technique merely to dazzle the ear, but rather as a means of pulling different elements of each piece together…almost an “anti-virtuoso” approach. Is this a fair assessment?

AO: I’m a big fan of groups that sound as an entity, decentralizing roles and interacting collectively, like a string quartet. At the same time, artists that have found their unique, personal touch, and have transcended the virtuoso, anti-virtuoso statement have been my references in music. If we talk about pianists in jazz history such as Thelonious Monk, Andrew Hill, Herbie Hancock, Ahmad Jamal, Bud Powell, Jackie Byard, Herbie Nichols, Sun Ra, Art Tatum, and more recently Jason Moran, Craig Taborn, the late Geri Allen, etc., they have developed a conscientious knowledge of their sound, their own “thing,” coming from an unyielding piano legacy but without paying attention to that virtuoso/anti-virtuoso assessment. I truly believe the industry has invented that antagonistic criteria to attract more public, sell more tickets and more albums.

LRB: I’m wondering if you’ve ever played in venues devoted to modern classical music as a soloist. I don’t see your music as being too far outside that discipline.

AO: Yes, I have played in venues that you could also hear classical music, but not in recent years. For musicians like me, coming from the jazz world, sometime it’s hard to find a talent buyer interested in presenting other styles of music in venues specialized in modern classical music. However, I look forward to presenting the music of “Cub(an)ism” at those kinds of venues soon.

LRB: Have you ever written for, or recorded with, larger groups—say, a quintet or sextet with a couple of winds or horns? I occasionally hear moments in your music that seem to be reaching out for a fuller voicing, even some polyphony.

AO: I have recorded with bigger ensembles, from big bands to quintet/sextet both as a sideman and leader. I also write concert music, and my pieces for string quartet, brass quintet, and percussion ensemble have been performed at Vermont College of Fine Arts, where I’m pursuing an MFA in Composition.

LRB: Can you tell us what some of your future projects might be?

AO: I have some works in process projects, on hold for next year, where most likely I will combine this polyphonic/ polyrhythmic concept even more.

I’m preparing the European tour with my trio, “Hidden Voices”, in September and October 2017, and a piano solo tour in the Netherlands and Germany in November 2017. I’m also looking forward to touring and recording a duo project with one of my favorite musicians and composers, the clarinetist/saxophonist Don Byron at the end of the year. At the same time, I will be finishing a piano trio (piano, cello, and violin), and a flute solo piece for my MFA, and I have few tours as a sideman this fall and next spring.

LRB: Thank you so much for your time and patience!

AO: Thank you very much to you too!

You can find out more about Aruán Ortiz at his website.