Last summer I had the honor of being invited to attend the first edition of the Sicilia Jazz Festival held in the Sicilian capital Palermo. This was a great experience and given that it was held during Corona period, it was a welcome trip after a long period of musical isolation. You can read my review of last years festival here. Given this, you can imagine I jumped at the opportunity without hesitation to return this year after receiving the invitation.

Just before we get into the musical side of things, I would like to give a little background on the festival and the organization behind this great event. The Sicilia Jazz Festival is organized and produced by the Sicilian foundation, The Brass Group. Founded in the mid 1970’s by pianist Ignazio Garcia, the Brass Group is somewhat unique in the world of jazz as it not only manages the historic theatre in the heart of Palermo’s historic centre, the Teatro Santa Cecilia, but also houses the Orchestra Jazz Siciliana as well as conducting a number of educational Initiatives.

During the years since it’s formation, the Brass Group has hosted and produced concerts by many of the largest names in jazz history including, among others, Miles Davis, Charles Mingus, Frank Sinatra and Dizzy Gillespie. In addition, the Orchestra Jazz Siciliana has hosted some of the worlds greatest conductors including Gil Evans, Bob Brookmeyer and Vince Mendoza to mention just a few.

During the festival I had the opportunity to speak with festival producer, Farbio Lannino as well as founder, Maestro Garsia. Fabio explained that one of the foundations artistic pillars is that each show should be a new and unique production. Fabio said, “We don’t just want to buy in a performance, anyone can do that. We want to create something new and for this reason most of our productions include new material commissioned for that specific production.” Over the years this has resulted in a treasure trove of compositions and arrangements that are contained in the foundations archive.

It’s not always been a smooth ride for the Brass Group and Mr Garcia recalled the period that, due to the cities political machinations, the Brass Group was threatened with the withdrawal of their funding. Apparently the decision was taken to divert the cities cultural budget to the Classical and Opera sector. As a protest, Mr Garcia spent a full month on hunger strike outside of the Sicilian Parliament tethered to a piano playing jazz music. This action seemed to work and the foundations funding was eventually reinstated. 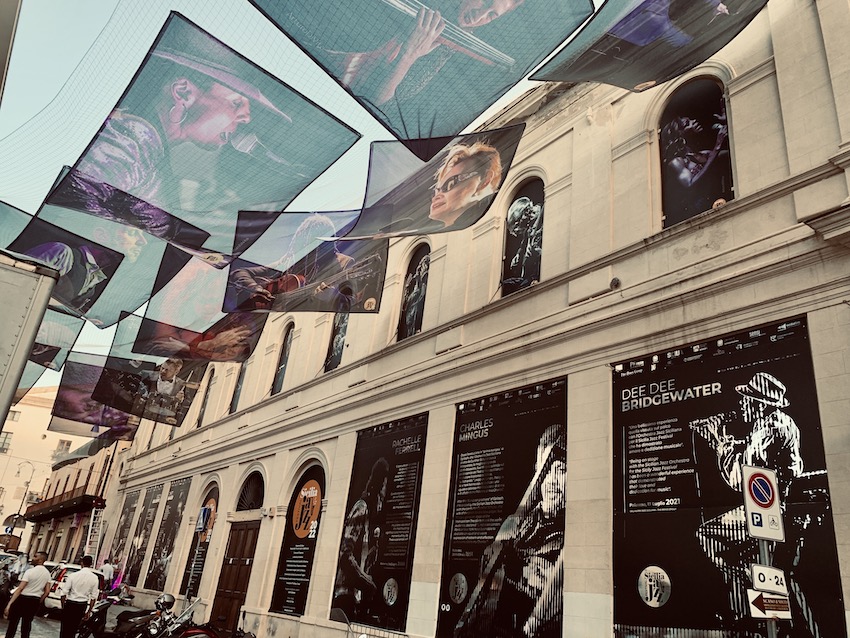 This year, seeing that we are somewhat freed from the clutches of Corona, the festival was able to be organized in it’s full format, a 12 day festival featuring nightly concerts on the main stage and multiple concerts nightly in the historical centre, renamed the “Jazz Village” for the festivals duration. This year, the Jazz Village was decorated by the spectacular photo’s from the festivals house photographer Arturo di Vita that were suspended above the streets like a surreal flock of seagulls hovering above the streets.

Having arrived and checked into my hotel, I joined my colleague journalists for a traditional Sicilian meal before heading off to the main stage, once again at the Verdura Theater. This is a staggering outdoor venue was built in the early 18th century, and is located in the gardens of Parco della Favorita, just 15 minutes from the centre of Palermo. Opening the main stage this year was Italian trumpeter Paolo Fresu together with the Orchestra Jazz Siciliana. Fresu is without doubt one of the most prominent jazz musicians in Italy and this was evidenced by the large crowd present. Fresu presented a great set showing his instrumental prowess, at times sparing with the jazz orchestra as well as performing some pieces in smaller formats with the bands rhythm section. Fresu’s use of effects added an extra dimension to the performance that I enjoyed greatly. 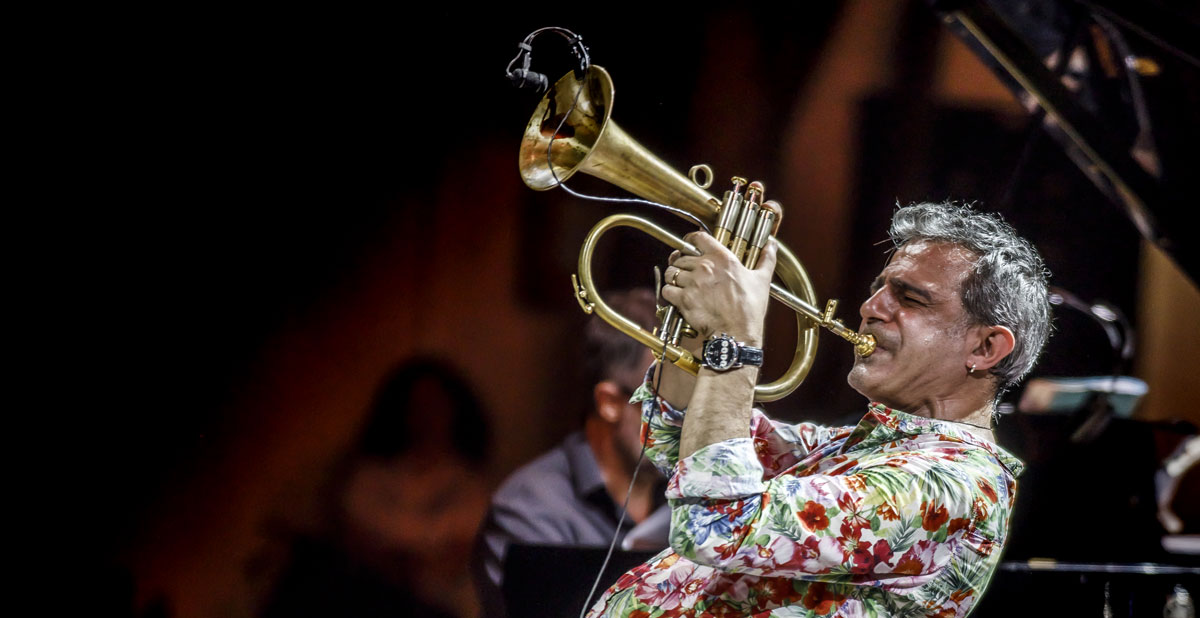 The following day we managed to catch the Carlo Butera, Jazz Manouche Trio with a program of hot club jazz at the Real Teatro Santa Cicilia before heading to the Palazzo Chiaramonte for a performance by the Jazz Orchestra of the Concertgebouw featuring vocalist Trijntje Oosterhuis. As always the band delivered a strong performance with, later in the set, Oosterhuis revisiting the music of Sinatra. I Particularly enjoyed the guest contribution of Domenico Riina and trumpet player Vito Giordano.

Often the most exciting performances at a festival can be found on the smaller stages and this was indeed the case at the Teatro Santa Cicilia with the trio led by saxophonist Gianni Gebbia and special guest, French phenomenon Médéric Collignon. For those unaware of Médéric (as I was), I suggest you to check him out, it’s without doubt worth the time. While the program was billed as an homage to Sidney Bechet, there was nothing here to excite the lovers of Trad Jazz, this concert was a captivating post modern take on his music. I was mesmerized by the musical antics of Médéric, ranging from stunning trumpet solos, amazing vocal passages and creative contributions on improvised instruments such as a garden hose. On leaving the theatre I realized I had just witnessed perhaps one of the most creative concerts I’ve see in my, far to many, years in this business.

Another surprise was a performance from a trio led by young pianist Federico Termini. Together with bassist Stefano India and Ruggero Caruso on drums, this trio presented a wonderful set of original material at the Chiesa dello Spasimo. I enjoyed this set from a stylistic perspective and specifically the interplay between the three. I’m convinced we’ll be hear more from Federico in the years to come.

Back to the main stage where British vocalist Sarah Jane Morris delivered a great set of standards and songs from the seventies and eighties. Once again the Orchestra Jazz Siciliana was magnifique as was Morris’ rendition of Stings “Fragile” that she dedicated to John Lennon.

It must be said that the Orchestra Jazz Siciliana played a vital role in this edition of the festival. Of the 12 concerts on the main stage the band played 10. Playing 10 different programs in 12 days is no mean feat for any big band. With a rich pool of musicians to call on, the Orchestra Jazz Siciliana was able to work with duplicate line-up’s and with great success, with each concert I saw, the band was fully on point. It’s still hats off to this amazing band.

I would like to mention two other concerts that I enjoyed in the Teatro Santa Cicilia. The first was a tribute to Charles Mingus performed by students of the Arturo Toscanini conservatory in Ribera. This was a great performance featuring specifically vibrant renditions of Mingus’ classic compositions Haitian Fight Song’ and ‘Fables of Faubus. Central to the performance was a narration, dripping in emotion and drama highlighting episodes in the life of Charles Mingus. In any case, I believe that this was the case as the entire text was in Italian. The second concert worth a special mention was a program featuring film music from the glory days of the Italian film industry. This concert was performed by a quintet led by violinist Francesco Nicolosi. Although it was hard to categorize this as jazz, it did not detract from the superb performance.

The concert by Italian pianist/vocalist Raphael Gualazzi was quite a surprise. Gualazzi, is well known in among a broad section of the Italian public, possibly due to his second place at the Eurovision song contest in 2011. This could be seen by the packed arena at the Verdura Theater. His varied program presented well known Italian songs along with some standards including an amazing arrangement of “You Don’t Know what Love Is”. Gualazzi is a captivating performer and this could be seen by the way he had the audience in the palm of his hand from start to finish, this reporter included.

Unfortunately I was not able to stay in Palermo for the entire festival as there was far more to discover and enjoy. Dutch powerhouse Fay Claassen was scheduled to perform with the Orchestra Jazz Siciliana on the 29th. Through the grapevine I’ve heard that it was an amazing performance. In addition, I would have loved to have seen Christian McBride on the 4th of July and I can only imagine that the closing concert by Snarky Puppy would have been a killer.

The final concert I attended was again with the orchestra and this time with the New York Voices. The vocal quartet performed a number their signature arrangements from their extensive repertoire including Stevie Wonder’s Don’t You Worry ’Bout A Thing and Ellington’s I Love You Madly. The four were in fine form and the energy exuded by the orchestra kept me on the edge of my stool. Perhaps the addition of the quartets house drummer, a Palermo expat, played a role here. The concert ended with an amazing version of the Queen classic Bohemian Rhapsody.

Once again the Brass Group have managed to produce an amazing festival. I firmly believe the Sicilia Jazz Festival will soon take it’s rightful place among the leading summer festivals in Europe.