Having recently reached an age where ticking off bucket list items seems to have a little more urgency, when an invitation to attend the first edition of the Sicilia Jazz Festival in Palermo arrived, I considered this an offer I couldn’t refuse. The line-up looked interesting and “Visit Sicily” had held place in the top ten unchecked bucket list items for quite a while. So with laptop packed, QR code and an abundance of online PLF forms filled out, I headed to the airport to catch one of the last Alitalia flights to go before their bankruptcy finally kicks in.

I arrived without incident at Punta Raisi (The airport in Palermo) and was quickly bundled into the cab waiting for me for the 35km trip into town. Now, having travelled a fair bit over the years I’ve seen some pretty crazy traffic however the traffic in Palermo makes Mumbai look like a Dutch village on a Sunday morning. During the 5 days I spent in the city I quickly came to realize that lane markings are just decoration, road rules are just guidelines and stop lights just a suggestion. I love this city, what a vibe it has. 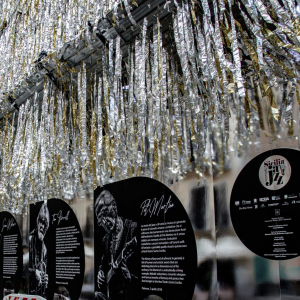 After arriving at my hotel, somewhat dazed but fully intact, I was greeted by one the festivals media representatives and given the lay of the land. So, with press pass in hand it was off to the part of town, that for the duration of the festival, had been dubbed the jazz village. It would be difficult to miss this part of town with it’s buildings draped in glitter and the streets adorned with a photo installation featuring the work of Arturo Di Vita.

The first concert of the evening was at Chiesa dello Spasimo, just one of the amazing venues used during the festival. This roofless venue, built during the renaissance as a monastery, was never completed and in 1582 was given a new purpose, namely Palermo’s first public theatre. Currently the complex also houses a jazz club and music academy.

The first band of the evening was “Arabella & the Kids”, a trio consisting of conservatorium students, with a program of mainly standards. Band leader Arabella Rustico was quite impressive both on bass and as a vocalist. I would have preferred to hear a somewhat more adventurous repertoire however what I did hear was played well. I expect in the coming years we’ll be hearing more from her. The following band at the Spasimo that evening was led by trumpeter Benny Amoroso with a tribute to Miles Davis. I only managed to catch the first 5 minutes as our transfer to the main stage at the Verdura Theater, a staggering outdoor venue located just 15 minutes the centre of Palermo, was waiting. What I did hear was quite impressive and I wish I had had the chance to hear more.

Heading the bill that night at the Verdura Theater was the Billy Cobham band. At age 77, Cobham is still playing better than ever and this evening we were treated to a set of retro ‘Jazz Rock’ from the seventies. About half way through the set the band played “Panama”. This comes from Cobham’s 2008 collaboration with the drummer and Asere and appears on the “De Cuba y De Panama” album. That nights performance of the track was a welcome diversion to the earlier rapid fire 16th notes and featured some amazing solo’s by French guitarist Jean-Marie Ecay and Scottish keyboardist Steve Hamilton. Billy’s extended drum solo toward the end of the set was amazing and showed that he is still a force to be reckoned with.

The following day delivered two surprises at the Chiesa dello Spasimo. The first was the Mario Caminita Urban J Quintet that delivered a great set of African and Neo Soul grooves with some truly creative use of samples and loops. I particularly enjoyed the contribution of both Marco and Andrea Ardizzone on Sax and Trumpet respectively who added exactly the right mix of subtly when required and stepping out when the room was available. Vocalist Alexandra Manduca added an extra dimension, I particularly enjoyed their arrangement of Marvin Gaye’s ‘Got To Get It Up”.

The second band that evening was led by drummer Mauro Patti. Titled the “Modern Afro Group” the band presented an amazing set of Afro-Beat and Ethnic feels. Once again I was not able to see the full set however with what I did manage to catch I can recommend checking this band out. Their modern take on the Coltrane classic Naima was amazing with the band taking the tune on a trip through multiple time signatures and feels. 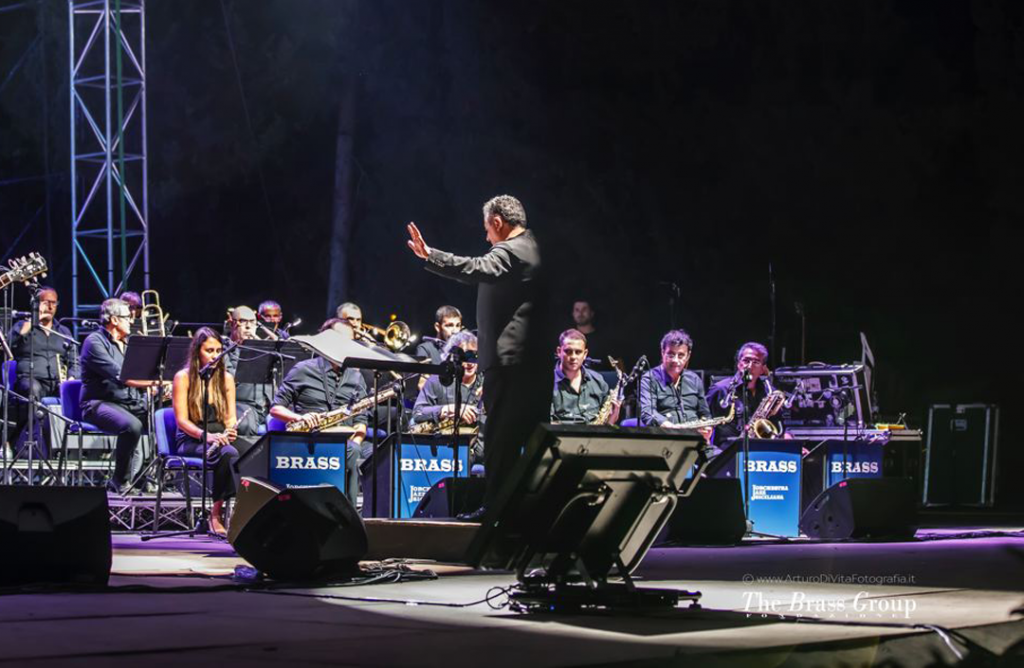 On the main stage that evening Italian vocalist Mario Bondi together with the Orchestra Jazz Siciliana presented a program paying tribute to Al Jarreau. While Bondi performed well making full use of his full multi-octave vocal range it was the Orchestra Jazz Siciliana that impressed me the most. Being more than familiar with the Big Band scene in Europe, I have to admit I was unaware of this band. After seeing this concert, I can say without doubt that the Orchestra Jazz Siciliana deserves to take it’s place amongst the top big bands Europe has to offer. On this evening the bands instrumentation was expanded to include Tuba, a backing vocal quartet and tuned percussion, this added an extra dimension to the soundscape. The arrangement of Brubeck’s ‘Blue Rondo à la Turk was highly impressive as was Chick Corea’s Spain that in my mind was the highlight of the evening.

After the performance I had the opportunity to speak with Festival director Fabio Lannino. Fabio is the director of the Teatro Santa Cecilia and currently heads up the organization of the festival. The festival is organized by the Palermo based organization the Brass Group in collaboration with Teatro Santa Cecilia. I was truly impressed to learn about the Brass Group and their activities in producing great jazz events in Palermo since the mid 1970’s. This is a story that needs to told so please keep an eye out for a future article on this in the near future.

At this point I think it’s worth noting that organizations production experience showed throughout the festival with all details taken care of perfectly. The venues were spectacular, the programming was good given the limitations due to Covid and the lack of touring bands on the road. What I did like was room given to local talent and to see what was happening in the Palermo scene. That said, most of all it was the atmosphere in the city and in and around the festival that impressed me. Believe me, this festival has a vibe. If you’re looking to check out a great jazz festival in a great city, this one should go on the list. 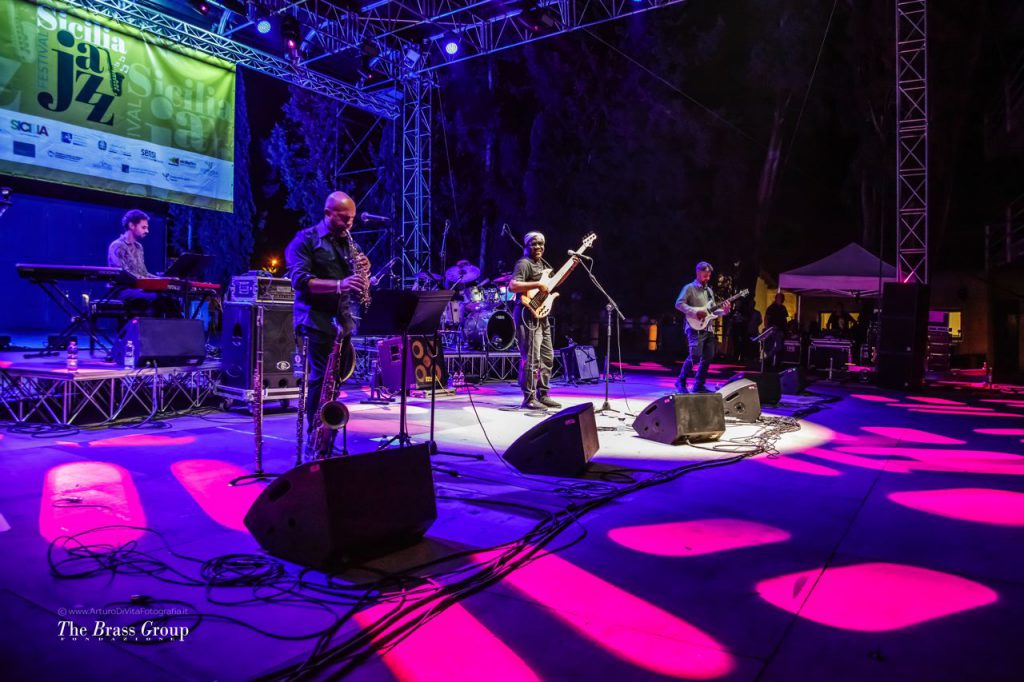 The following night saw Richard Bona grace the main stage with a tribute to one of his early influences, Jaco Pastorius. For this performance Bona shared the stage with a group led by Sicilian keyboardist Seby Burgio. Bona and his Italian cohorts had little time to rehearse for this show however this lack of rehearsal time could not at all be detected during the show, it was as tight as tight can be. Bona’s take on “Teen Town’ was impressive as was the rendition of of “Used to be a Cha Cha”. Bona’s showed his flexibility touching on many styles however it was Caribbean and Latin influences that dominated the set. It should be noted that the musicians sharing the stage with Bona were exceptional with a special mention for saxophonist Luigi Patiemo.

Saturday saw another collaboration with the Orchestra Jazz Siciliana, this time with Italian Rock and Blues hero Alex Britti. I had high expectations for this however I felt it to be somewhat of a missed opportunity. I would have preferred to have seen more room for the Orchestra and perhaps some arrangements that were somewhat more interesting. However that said, the sold-out theatre lapped it up and this was evidenced by overwhelming applause.

The final day of the festival delivered two great shows, the first in the Chiostro de Sant’ Anna that also houses the Galleria d’Arte Moderna. This concert featured a wonderful collaboration with the Dutch Instant Composers Pool and the Sicilian Improvisers Orchestra. The music was amazing ranging from the avant-garde through to classical minimal music. The Chiostro de Sant’ Anna is an amazing venue and it was a little disappointing to see so many unused seats as the music presented was top class.

Personally, one of the best shows I saw during the festival was earlier that evening at the Chiesa dello Spasimo. This was a quartet led by saxophonist Carla Restivo with her “Paula Project”. Carla presented a program of inspiring original material that crossed many boundaries and held the attention of the audience throughout. I particular enjoyed the interaction between sax and vocals. Unfortunately I missed the name of the vocalist and I apologize for this, but this lady has chops, amazing. If you’re reading this and know her name, please drop me a mail.

All in all the first edition of the Sicilia Jazz Festival was excellent. Across the board, the production was of the highest level and a special mention is deserved for the sound production. With the exception of the Teatro Santa Cecilia (this venues has amazing acoustics) all of these venues were challenging from a sound perspective however the sound quality I experienced at all of the concerts I attended was spectacular.

After nearly a year and a half of lockdowns and restrictions it was great to see some old colleagues and meet some new friends. I want to thank the festival organization for the truly warm reception and I’m looking forward to once again visiting Palermo next year for the second edition.