It is always exciting to me when a new Barrett Martin album comes across my desk. Released in August, ‘Scattered Diamonds’ is incredibly, his 9th studio album and does not disappoint. A beautifully diverse line up of musicians including 15 guests from across the globe, including two Grammy award winning guitarists (Peter Buck and Kim Thayil) and Indian, Ghanaian, Iraqi and Senegalese instrumental stars, all of whom are brought together to create an incredible eclectic and inspiring musical exploration.

As a Grammy award winning producer, composer, percussionist and writer with over 100 albums to his name, expectations are high and his love and passion for music making and exploration has never been clearer. Barrett has this to say about his latest album: 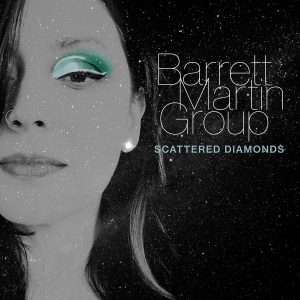 ‘Scattered Diamonds is a collection of my best songs and collaborations with friends from around the world. The album represents my global musical influences, and it seems particularly timely now, because they feature musicians and singers from the Middle East, West Africa, and India, as well as several jazz and rock musicians, who I have worked with over the years. Scattered Diamonds encapsulates all of these special guests and their immense talents, organized into one concise album. Each of these songs is a diamond in their unique example of how music can be expressed globally, and I think it’s my favourite album so far – it’s certainly the most adventurous!’

Hard to highlight any tracks in particular, as every single track is superb with outstanding performances from everyone involved. From the gentle funky grooves in ‘Battleship Swing’ to being transported to the mind of the Hindu Goddess of the Arts in ‘Sarasvati’, the album is captivating. A favourite track of mine is ‘Blue Sunrise’ which is dripping with some downright dirty grooves, with a nod to Barrett’s roots, in a beautifully simple track with a feel that stays with you. ‘Scattered Diamonds’ is the perfect title for this album.

Barrett will be touring in 2021 with his ‘Storytelling Tour’ where he will be exploring his books and his journeys across the world over the past 30 years. As well as an extremely accomplished musician, Barrett is an award-winning writer and his books ‘The Singing Earth’ and ‘The Way of the Zen Cowboy’ are fascinating giving not only an insight into his world and musical journeys but into the world of different musical cultures. This tour is a not to be missed event.