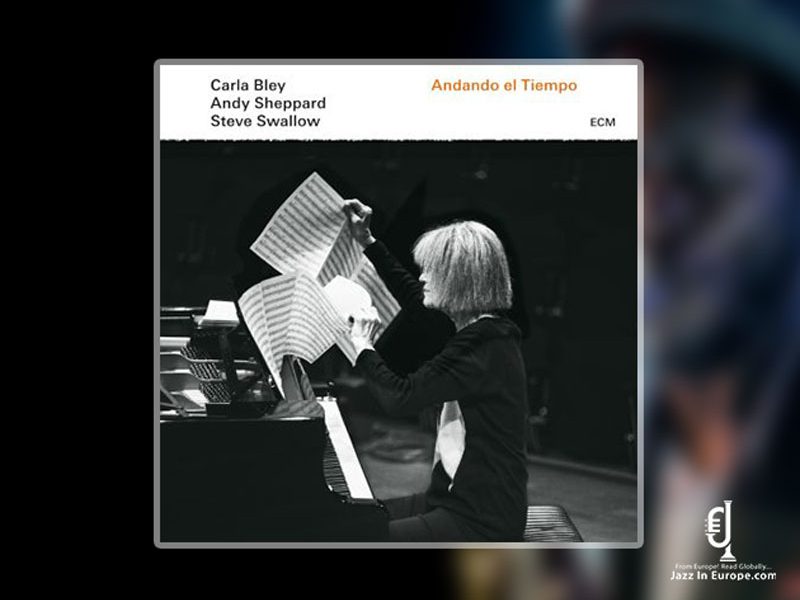 Steve Swallow and Carla Bley recently released their third Trio based album on ECM, this time again with Andy Sheppard titled “Life Goes On”. This album is the third volume of a sequence of albums that begun in 2013 and continued with Andando El Tiempo (2016).

Once again, “Life Goes On” was recorded in Lugano and produced by Manfred Eicher and features striking new music from American pianist/composer Carla Bley, whose trio with saxophonist Andy Sheppard and bassist Swallow has a long history. (Their first recording in trio format was Songs with Legs, recorded for the ECM-distributed WATT label in 1994.)

Bley has composed for ensembles of every size but, over time, the trio has established itself as an ideal unit for expressing the essence of her work. Throughout Life Goes On, Carla’s terse, distinctive piano, shaping phrases irreducible as Monk or Satie, is beautifully framed by Swallow’s eloquent, elegant bass guitar and Sheppard’s yearning saxes.

“We’ve learned to breathe together when we play,” Carla told the Charleston City Paper recently. “I hear our voices in my mind’s ear as I compose for us. I especially relish the conversational flow the trio format allows. We’re essentially a chamber music ensemble, and this allows me to write music for us free of bombast and exaggeration. Music stripped down to its basic elements. This format also demands that, as players, we improvise in the character of each particular song, which is both a challenge and, on a good night, a great satisfaction. ”

The new compositions featured here, all penned by Bley, take the form of three suites, each of which was widely previewed and fine-tuned by the group at concert and festival appearances in the US and Europe prior to the May 2019 recording session at Auditorio Stelio Molo RSI in Lugano. “This is music we’ve been preparing for the last three years,” Carla Bley told DownBeat, when the trio played the Big Ears Festival in Knoxville, as part of ECM’s 50th anniversary celebrations. “The reason we’re touring is to be able to practice it every night and get it right, because it’s finally going to get put down. It’ll always be the same once it’s recorded.” If this seems unlikely, given the improvisational capacity of the participants, the recording does have a definitive air about it.

The stoical sound of the 12-bar blues – resolute and ready for anything – opens Life Goes On. The album’s title piece was written as Carla Bley was recuperating from illness, alluded to in characteristically droll liner notes – in verse this time. “The whole suite has a more optimistic feel than the melancholic, wistful Andando El Tiempo,” suggested Jazz Views writer Jack Kenny, reviewing the group in London. “The middle parts, ‘On’ and ‚ And On‘, are written with wit and humour. The last part, ‘And Then One Day’, moves from tango into a more settled rhythm. This is a great addition to the Bley library, bright and optimistic.” Sheppard offers robust tenor in the first three movements, switching to lightly floating soprano for the fourth and sharing lead instrumental duties with Swallow, who has shaped a personal, highly lyrical approach to the electric bass.

“Beautiful Telephones”, perhaps the first jazz composition inspired by a quote from the White House’s current occupant, has been described by JazzTimes as “Bley at her sardonic best…Introduced as a duo with Swallow, the solemn and cinematic theme wended through several elegiac moods punctured by a series of quotes, including ‘The Star-Spangled Banner’ and ‚’Yankee Doodle.'” Carla has summed it up as “a piece where things get excited and then impatient and then excited again and then change. Nothing stays the same because, with the attention span of the President, we have to quickly change the music, too.”

The third suite, “Copycat”, explores the notion of call-and-response in fresh ways as the improvisers continue each other’s thoughts, putting a slightly surreal spin on the imitation games that are part of jazz interaction, as phrases are passed around among the players for commentary and elaboration.