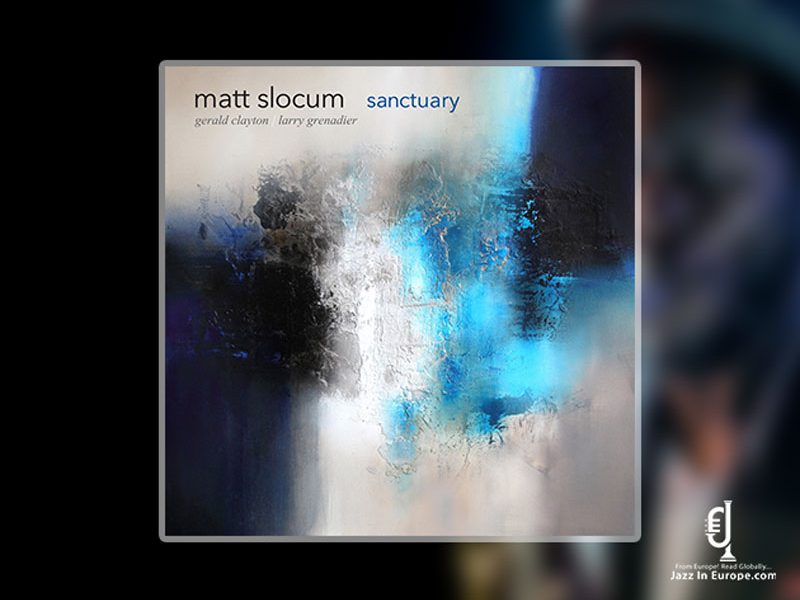 On Sanctuary drummer/composer Matt Slocum unleashes lovely, inspiring missives that could compel you to imagine a world in which peace, kindness and solace prevail – his music comes from an unsullied place, where the music is all that matters. And, he has a sound! An inviting, burnished sound as pure and effervescent as water streaming from high peaks that reveals itself as much through his compositional output as it does through his choices behind the drums.

Slocum is also a conceptualist and an instigator, traits which have produced five acclaimed recordings of mostly original music, including this album, four of them featuring the great Gerald Clayton on piano, and Sanctuary being the first to feature first-call bassist Larry Grenadier.

The three protagonists on Sanctuary, recording after a single rehearsal, listen and interact on such a high level as to give the impression that they’d internalized the music after a long tour – a credit to Slocum’s leadership. “Matt always focuses on the melody and beautiful writing, and the forms are obvious and smooth. The song, the composition and melody is the most important thing, which is why it’s fun to play with him. He has a very strong foundation in the tradition, super-hard-swinging but still modern,” said long-time collaborator and bassist on Slocum’s first three recordings, Massimo Biolcati.

Also notable on Sanctuary is the programmatic quality that underpins the proceedings. It’s definitely an ALBUM – the tunes connect emotionally, they cohere into a narrative arc. “Usually I have in mind a specific instrumentation and group of musicians before I write and arrange music for a project, so that it becomes tailored to that configuration and musical aesthetic,” Slocum says. “Here, for the first time, I took a different approach. I allowed myself to write whatever I felt like without those preconceptions. This seemed to make me reflect musically more on what I’d call places and characters that, at one time or another, have provided a perceived sense of creative refuge and even a feeling of home. That’s why I’m using the title, Sanctuary. I’m struggling with the new reality since January 2017, which I’m sure had some influence on it.”