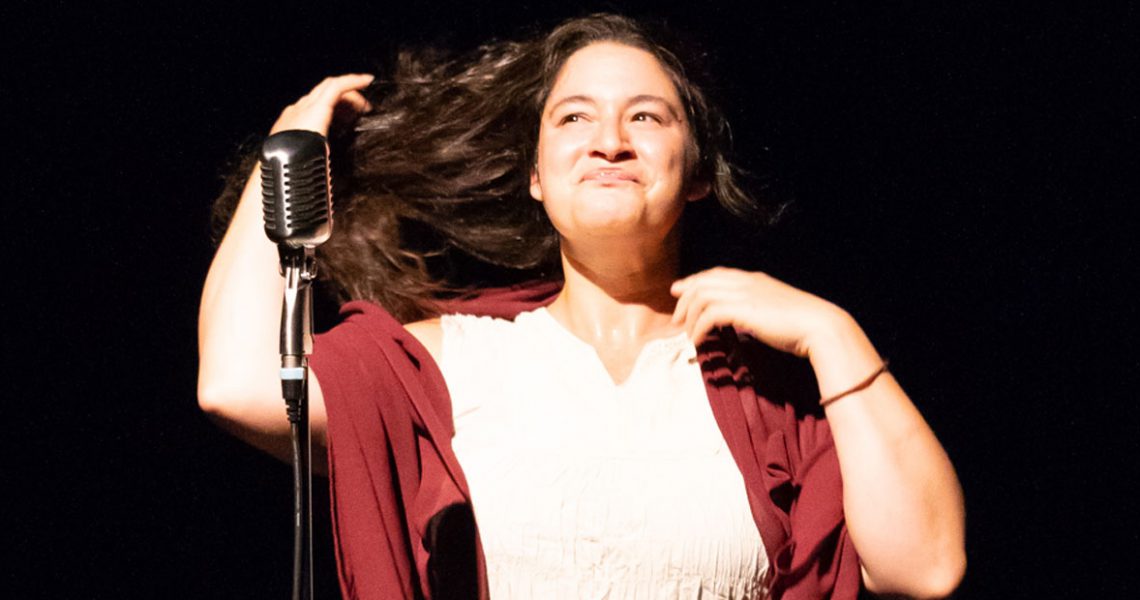 Last August, Miriam Gould premiered her first solo theatre production, Empty Room at The Cockpit in London receiving rave reviews. Starting on the 28th of this month Miriam will take the production on tour with performances at the Camden People’s Theatre, the Exeter Phoenix and the Tom Thumb Theatre.

Empty Room is about a family held together by music. Onstage a jazz singer talks about her daughter and sings about her lover. Backstage a sax player rants about art,  addiction, and coping with fatherhood in between. And in a classroom, an idealistic teenager overshares her passion for Dmitri Shostakovich and the importance of music in times of trouble. In different places and times, they speak about truth, art, love and trauma.

Created by Miriam Gould with Dramaturgy by Alex Scott (Little Bulb Theatre) Empty Room was developed over a number of years from biographical material and original music from Miriam’s jazz musician parents, saxophonist Sal Nistico and singer Rachel Gould. Sal Nistico (Count Basie, Dizzy Gillespie, Buddy Rich) was known for his speed and articulation as a soloist and was the lead tenor in the Woody Herman Big Band in the early 1960s after which he became more of a bebop/hardbop player. Rachel Gould (Michel Graillier, Benny Bailey) still tours the world and is the last singer alive to have recorded with Chet Baker.

In an Op-Ed piece on this platform last year Miriam spoke openly and gave a heartfelt account of her childhood experiences that formed the basis for this production as well as why she choose the world of theatre to express herself. Below is an excerpt.

“Throughout the making of Empty Room, I found that I was avoiding my own part in the story, mainly out of fear of self-indulgence. But of course, as my mother keeps reminding me, the show centres around me, the child of these two Jazz greats (my term, not hers).

“I grew up on the road, pretending to be asleep in cars speeding through Italian mountain roads so I could eavesdrop on adult conversations, or eyes streaming in smoky jazz bars, the only child in a world of adults, loved and cherished by everyone around me, and feeling most at home on the edges of mainstream, like any touring musician. Jazz is my lifeblood; it was the air I breathed until I started growing up. Having had this childhood means I am unable to form routines, my sleeping pattern is definitely not a pattern and any 2-chord song makes me want to break things.

“I’ve worked hard at finding my own voice, my own modes of expression, and I have purposefully stayed out of the Jazz world, not wanting to forever be referred to as ‘Sal Nistico’s daughter’ or have my voice compared to that of my mother. Theatre has been a place where I can use my music to redefine myself over and over again. The freedom of expression I have found in this medium has been, in many ways, my salvation. I have learnt that, if I can’t express myself creatively, I lose my mental balance, a balance more tenuous than I’d often like to admit.”

Miriam Gould is an independent theatre maker, performer and musician. She is an Associate Artist of Little Bulb Theatre (Orpheus) and co-Artistic Director of Double Trouble with Judita Vivas (Adventures in Black and White). She has performed at the Salzburg and Brisbane Festivals, as well as throughout the UK (Royal Opera House, Birmingham Rep, Wales Millennium Centre, Battersea Arts Centre).

For Jazz In Europe readers there is a Promo code for the shows in the Camden People’s Theatre – When booking tickets enter the code: JazzRoom to receive a 20% discount on your tickets.

More Information can be found here on Miriam’s website.