Raised on Jazz – inheriting music as a tool for survival 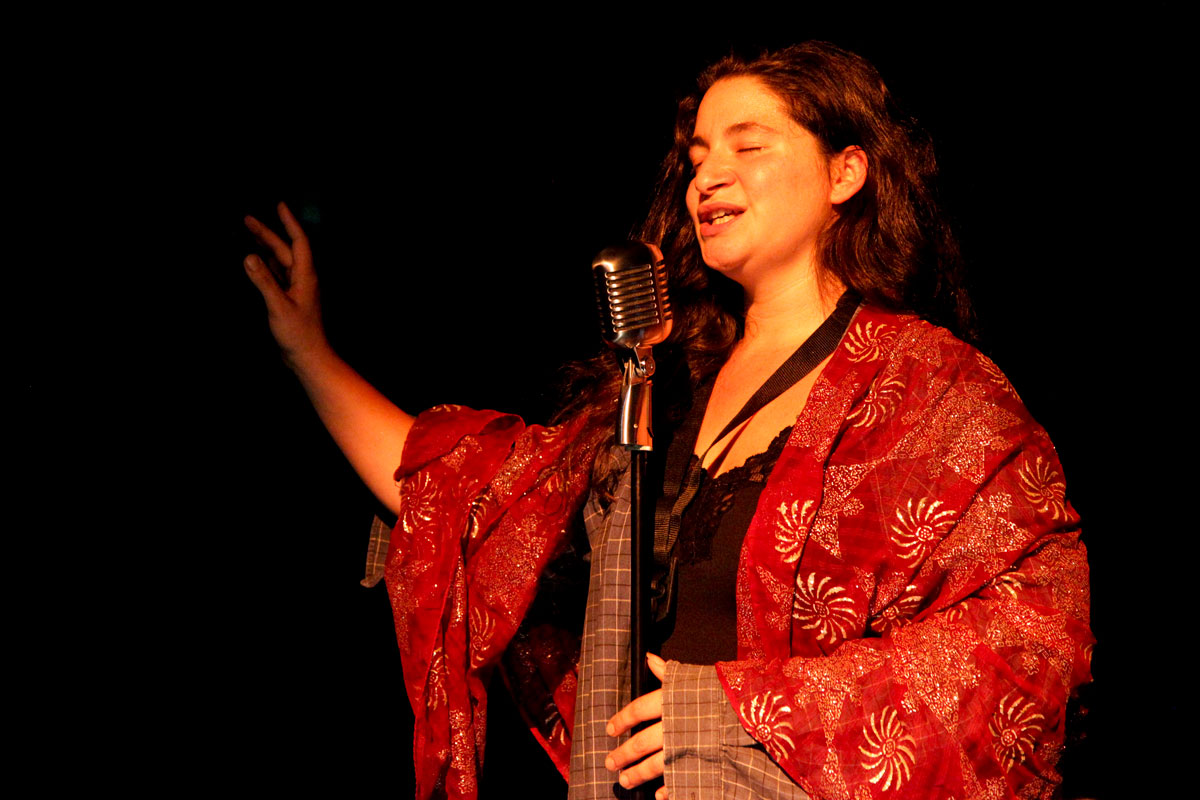 Editors note: Miriam Gould is the daughter of the Jazz Singer Rachel Gould and Jazz singer/Jazz Tenor sax player Sal Nistico. Below, Miriam’s gives some background and an overview on her new one woman show, with many good reasons to go and see it in person.

This is a personal account of how music can help us survive.

I was born in Cologne, Germany, in 1985 to Rachel Gould and Sal Nistico, a jazz singer and a jazz tenor sax player.

Rachel and Sal met for the first time in New York at Sweet Basil’s where Woody Herman had invited her to sit in on his sextet, of which Sal was a member. Rachel was a young, up-and-coming jazz singer. When Sal saw Rachel he thought she was famous. When Rachel saw Sal she thought he was a really dark cat.

They met again a few months later when they were both touring Germany – in a breakfast room at a hotel where they both happened to be staying. My mother says they fell in love over breakfast.

Before I go any further, I feel like I should clarify some things.

I am about to start touring a show about our family unit, a show which tells the stories of my parents and how my father’s death affected both my mother and me in different ways, and ultimately, about how we all used music to keep afloat. The show is called Empty Room, named after the only song where my father and mother collaborated on both music and lyrics. In sharing this personal story I have had the unwavering support of my mother.

Throughout the making of the show, I have found the invisible barriers between what I needed to tell and what was too private. At times, I’ve stumbled over these barriers and bruised myself or other people.

Yes, I am sharing a deeply personal story (not just to me), and I hope to continue to treat the memories and stories respectfully. I believe that a person’s art shouldn’t be separated from their life and in celebrating my father and mother’s music, I have found that their lives have enriched this celebration.

I barely knew my father and much of what I know has come through other people’s stories. I have also been raised with the belief that openness and tolerance are imperative to living a fulfilling life. Much of the process of making the work has involved learning what to share and how, as the main aim of any work of art should be about communicating what is relevant for the audience in order to enrich and/or broaden their experience of their own lives.

Sal, father to 5 children including me, looked like a gladiator, with a stocky Southern Italian physique, thick curly black hair and a crumpled forehead. People judge books by their covers and most people assumed that Sal was a man with a thick skin, a tough guy. In fact, as is so often the case, he was incredibly sensitive. He had a child’s hatred of cruelty and injustice (something I’ve inherited), and he struggled with the machismo and bravado of men on tour.

In a rare recorded interview with Tubby Hayes, when he was still at the start of his career and playing with the Woody Herman big band, he spoke of finding that moment, when you’re able to fly in the music, saying that is what he lived for. He also firmly believed that art is communicating with people, that art should be about what life could be, not what it is. He was young when he said these things and later on in his life, this idealism became more nuanced. He liked to say: ‘It’s only music, how good can it be?’

He died on the 3rd of March, 1991, aged 50, in Bern, where we were living at the time. Naturally, this was incredibly traumatic for his entire family as well as the many people who loved him dearly. Throughout my life, I have continuously been struck with the love that so many felt (and feel) for my father.

After his death, my mother, now a single working parent, managed to juggle her own career as a jazz singer, raising a small child (and a stubbornly independent one at that), moving to a new country (Holland), changing jobs and her own emotional upheaval. I am still baffled by how she managed to cope with losing my father, raising me and continuing to work and make music. I know it was anything but easy.

My mother has said to me more than once that ‘music saved her life’. I believe her. Over the years, she has written some of the most beautiful songs I have ever heard. Composing these songs was one of the ways she was able to process the difficulties in her life, songs such as This Merry-Go-Round, Depression, and Gone. They use a descriptive poetry to express depth of feeling we cannot express in rational language. As human beings, we have this tool ‘art’ which we can use in order to comprehend and communicate the absurdity and hardship of existence in ways that conventional communication doesn’t allow for.

My father said (again in the Tubby Hayes interview) that ‘people have a tendency not to listen to [spoken] words, but with music it reaches into here’.

The reason for making the show Empty Room was the poignancy of my mother’s songs, and the example they provided for one of the ways through which we use music as a survival tool. As I have been making the work, over the several years it has taken me, I have discovered more and more ways, in which music (or wider creativity) can help people survive; even going so far as bringing people out of comas after all hope has been lost.

Throughout the making of Empty Room I found that I was avoiding my own part in the story, mainly out of fear of self-indulgence. But of course, as my mother keeps reminding me, the show centres around me, the child of these two Jazz greats (my term, not hers).

I grew up on the road, pretending to be asleep in cars speeding through Italian mountain roads so I could eavesdrop on adult conversations, or eyes streaming in smoky jazz bars, the only child in a world of adults, loved and cherished by everyone around me, and feeling most at home on the edges of mainstream, like any touring musician. Jazz is my lifeblood; it was the air I breathed until I started growing up. Having had this childhood means I am unable to form routines, my sleeping pattern is definitely not a pattern and any 2-chord song makes me want to break things.

I’ve worked hard at finding my own voice, my own modes of expression, and I have purposefully stayed out of the Jazz world, not wanting to forever be referred to as ‘Sal Nistico’s daughter’ or have my voice compared to that of my mother. Theatre has been a place where I can use my music to redefine myself over and over again. The freedom of expression I have found in this medium has been, in many ways, my salvation. I have learnt that, if I can’t express myself creatively, I lose my mental balance, a balance more tenuous than I’d often like to admit.

When my father played, he felt free from a world that was too loud, too cruel, too hard. When my mother sings, she is free from the past, a past which otherwise haunts her. When I sing, when I play my violin, when I talk to an audience and feel them connect, all the pain, the worry, the hurt, mine and that of the world, dissipates and is turned into hope and my will to survive is strengthened.

As a sister project to Empty Room I am compiling an ongoing Survival Playlist, made of submissions by audiences and people around the world of songs which have helped them through difficult times. What I have found is that a particular song can be so powerful that it can do the most amazing things: heal trauma, bring the memory back of a lost loved one, remind someone of a needed truth, be a salve, allow for the suffering to come out unfettered…the list of medicinal properties is long and encouraging.

It feels like the purpose of art in society is currently being called into question, especially here in the UK, where funding is continuously being cut and I spend approximately 30 hours a week working for free in order to make sure a show can happen. I know it might seem over-dramatic to say this, but I do genuinely believe this. Art saves lives.

Miriam Gould is an independent theatre maker, performer and musician. She is an Associate Artist of Little Bulb Theatre (Orpheus) and co-Artistic Director of Double Trouble with Judita Vivas (Adventures in Black and White). She has performed at the Salzburg and Brisbane Festivals, as well as throughout the UK (Royal Opera House, Birmingham Rep, Wales Millennium Centre, Battersea Arts Centre). Empty Room is her first solo work and will premiere at the Camden Fringe (London) at The Cockpit, 7 – 9 Aug. For tickets, book here.

Rachel Gould is an American-born singer, composer, lyricist and educator who moved to Europe in 1975. Rachel is known for her unique interpretation of standard material as well as her original compositions. She has toured extensively, performing on radio, tv and at countless festivals and clubs with musicians of 3 generations. She taught at European conservatories for 30 years, now teaching clinics and masterclasses all over the world, inspiring new generations of singers. Among others, she has worked and recorded with Chet Baker, Benny Bailey, Jerry Bergonzi, Phillipe Catherine, Riccardo del Fra, Phil Harper, Woody Herman, Sal Nistico, Tom Nicholas, Peter Nieuwerf, Horace Parlan, Jacques Pelzer, Enrico Pieranunci and Marco Tamburuni.

Sal Nistico was associated for many years with Woody Herman’s Herd, playing in the 1962–65 group. Earlier, from 1959 to 1961, Nistico played with Chuck and Gap Mangione’s Jazz Brothers band. In 1965, he joined Count Basie’s band. Throughout his career, he played with musicians such as Dizzie Gillespie, Nat Adderley, Don Ellis, Stan Tracey, Chuck Mangione and Buddy Rich.
Nistico’s solo work is more oriented towards bebop, as heard on recordings such as Heavyweights, Neo/Nistico and Empty Room.