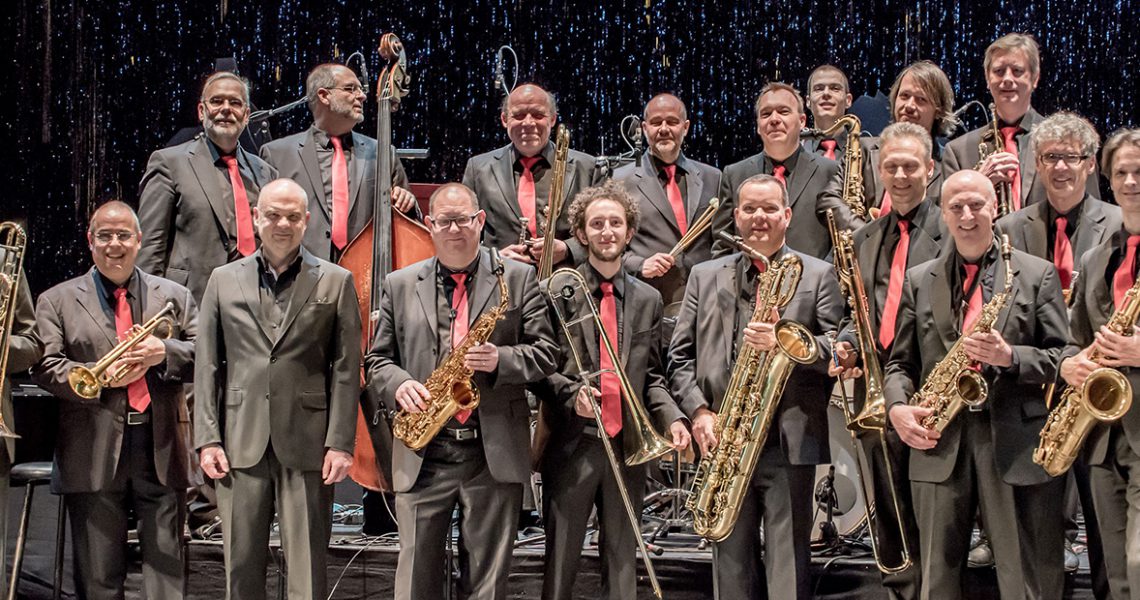 Recently the Big Band Der Deutsche Oper Berlin released their third album “Soul Journey” on the German label Mons Records. Recorded live in February this year the album documents a large project paying tribute to the legends of Soul and features the Jazz/Pop Choir The Young Voices Brandenburg, Vocalists Florezelle Amend, Amber Schoop and Worthy Davis. Tying the Journey through the history of Soul is German Actor Christian Brückner. I recently had the pleasure to sit down and speak with drummer and co-founder of the Big Band Der Deutsche Oper Berlin, Rudiger Ruppert to find out more about the band and their activities.

The origins of the Big Band stem from a benefit concert in 2005 with 12 brass players and the percussionist from the Orchestra of the Deutsche Oper along with a number of local Berlin-based jazz musicians to fill out the line-up. This concert was a great success and led to the management of Deutsche Oper giving the green light to form a permanent Big Band and to produce a number of concerts per year in the series presented in renowned Berlin temple of culture “Deutsche Oper Berlin”. The current “Opernhaus” was opened in 1961 and replaced the original building built in 1912 and destroyed during the second world war. The complex is Berlin´s largest and Germany´s second largest music theatre and features among the most modern institutions in Europe.

The band’s line-up has remained stable over the years and still to this day includes 11 members of the Opera orchestra. Rüdiger stated “Most of the chairs filled by non-orchestra members are in the sax section. This is to be expected as these instruments are not represented in the standard Symphony Orchestra.” Initially, the Band concentrated on the more traditional Big Band repertoire however with the appointment of the trombone player, composer and arranger Manfred Honetschläger as conductor the band began to switch focus toward performing arrangements written specifically of the band. Next, to the concerts performed in the main concert hall, there are regular themed combo performances that take place in other performance spaces within the complex and the band is often featured at major events within the city.

The Soul Journey project is to date one of the bands most ambitious projects. Rüdiger stated “I have always been a huge fan of Soul music and the initial idea for the program came after viewing a Video produced by the Jazz/Pop Choir, The Young Voices Brandenburg. I love soul music and wanted to put together a program that takes you on a journey through Soul music from it’s beginnings to the current day.” After discussions with trombonist and co-founder Sebastian Krol, the band moved ahead and started putting the show together. Manfred Honetschläger, the band’s musical director took care of the arrangements while Text linking the chosen music was written by Rüdiger himself.

For the project, the band added an extra Hammond player along with additional percussion. Vocal duties were taken care of by Florezelle Amend, Amber Schoop and Worthy Davis along with The Young Voices Brandenburg. The project was narrated by one of Germany’s most prominent actors Christian Brückner. Known throughout Germany as “The Voice” Christian Brückner is no stranger to Jazz having previously taken part in projects with the WDR Big Band, the Cologne Contemporary Jazz Orchestra and in 2007 and 2010 worked with trumpeter Michael Leuschner in a program titled “Prince of Darkness” narrating passages from the autobiography of Miles Davis.

I asked Rüdiger about the choice of using Christian Brückner as narrator for the program, “Well the choice was quite simple, we know him well as his son is the guitarist on the band. Due to the limited time we had available to rehearse the full production, we needed someone that wouldn’t need to rehearse much, Christian was a perfect choice, he has a great affinity with the music and has the perfect voice for the role.” Rüdiger went on to say “The reaction to the program was amazing, the show was completely sold out and we decided to record the performance and release the concert on CD.”

As mentioned above, Soul Journey is the band’s 3rd album for Mons Records. In 2008 the first CD “Premiere” with Bill Ramsey was released and was followed in 2010 with “How long is now?” featuring Pascal von Wroblewsky. All productions were recorded live. “We prefer live recordings, there’s an extra energy in the band when we perform live that is sometimes difficult to achieve in a studio setting.”

We went on to speak about what the band has coming up. The next major project is scheduled for May 2019 and is a program based on the music of Leonard Bernstein and George Gershwin titled “Jassical Voices In Concert”. In 2018, Leonard Bernstein would have been 100, George Gershwin 120 years old and while these anniversaries may be more than enough reason for a Big Band to look at building a program around it’s not the reason the band choose the theme. Both composers integrated jazz elements into their symphonic music and given the fact that over 50% of the musicians in the band are also members of the Opera Orchestra they are perfectly placed to bring a unique look at re-imagining the material. This concert will once again take place in the Main Hall of the Deutsche Oper Berlin on May the 2nd and feature the voices of Katharine Mehrling, Meechot Marrero, Seth Carico, Byung Gil Kim. Following this, in June the band will return to its roots for a program paying tribute to those great performances captured just over 50 years ago at the Sands Hotel and Casino in Las Vegas with Frank Sinatra and the Count Basie Big Band. For this program, the band will be joined by vocalist Tom Gaebel.

Germany has a rich history when it comes to big band music and sports a number of professional big bands that are ranked among the best in the world. The Big Band der Deutsche Oper Berlin while far younger in age can proudly be seen as part of this tradition. Their unique position with the cultural world of the German capital ensures that we will be hearing a great deal more from this Band in the years to come.

More Information on the latest release “Soul Journey” can be found on the Mons Records website.

To find out more on The Big Band der Deutsche Oper Berlin visit their website.