Letter One Rising 2018 Europe. The Second Season has Begun!

The ‘LetterOne RISING STARS Jazz Award’ has become a significant event in the European jazz calendar. The annual award aims to propel the careers of outstanding young jazz musicians and to enable them to quickly find an audience – firstly by providing an accommodating a 7 day tour across major European jazz festivals and secondly by offering a full year of PR and marketing support. Open to artists from all over Europe, the award is considered to be a golden opportunity for musicians to be catapulted onto the international stages! The submission phase for the next European edition of the award is underway – artists can upload their material on a dedicated website until October 27th, 2018!

Since the launch of the annual award in 2017, the award has received recognition and social media support from many Jazz heavyweights including Quincy Jones, Jamie Cullum, Wayne Shorter, Gregory Porter and organisations such as the Lincoln Center in New York or Berklee College of Music in Boston. The award has now even gone Stateside and for the first time, this year will be searching for a RISING STAR in the USA and Canada who will perform at festivals in New York, San Francisco, Washington, Rochester, Iowa City, Montreal and Vancouver. 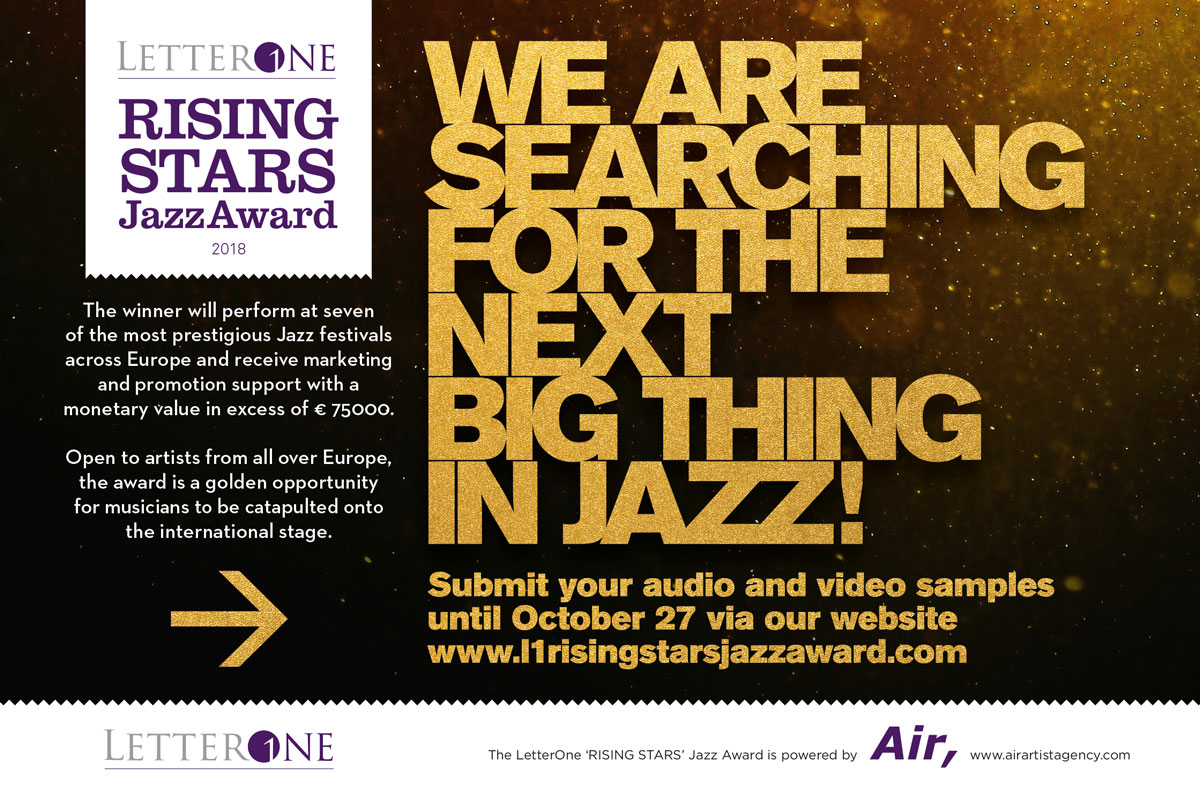 The European version of the ‘LetterOne RISING STARS Jazz Award’ is an investment in Europe’s brightest Jazz talents and hugely benefits from the sponsorship and dedicated backing of Mikhail Fridman – a philanthropist and the founder of the LetterOne Group. Most importantly, in this case, Mikhail Fridman is a huge Jazz fan too – he is a frequent visitor of Jazz festivals across the world and the founder of the renowned Leopolis Jazz Fest (formerly known as ‘Alfa Jazz’) in Lviv.

“I love Jazz. It’s part of my life. We are looking for up and coming jazz musicians – for new talent, who are just starting as young professionals – and want to help them on their way to becoming the jazz stars of tomorrow.” “Today´s jazz market is very fragmented, with many individuals working in small operations who run festivals, clubs (often on a voluntary basis), labels and distributors, as well as agencies. We want to help grow the next generation of Jazz artists and enable them to realise their potential.”

Producing the ‘LetterOne RISING STARS Jazz Award’ is the award-winning AIR ARTIST AGENCY, whose director Burkhard Hopper has a long-standing experience in introducing new artists. For 9 years he was running the Rising Stars concert series which – among others – introduced artists such as Diana Krall, Brad Mehldau, Nicholas Payton, Jane Monheit and Esbjörn Svensson to audiences in Europe.

“My whole life I have worked to further the career of young and upcoming artists. I am very happy that with the support of Mikhail Fridman it will be possible to continue with the RISING STARS scheme that was so successful from 1996 to 2004 and started the careers of artists such as Diana Krall, Brad Mehldau, Esbjörn Svensson, Nicholas Payton, Jane Monheit and many more in Europe.”

For artists wishing to be considered for the award there are three steps:

1. Submission
The submission stage requires artists to submit biographical material, photographs, three sound samples and one video link via web upload. The material should illustrate their music. Deadline for all submissions is midnight on October 27, 2018. The website for submissions and uploads is www.l1risingstarsjazzaward.com

2. Voting
A 3-step voting process will take place from October 27 onwards. In the first round of voting the seven participating festivals will have their say and reduce the number of entries to approximately 30 candidates. In the second round, a jury of music industry professionals and musicians will select their individual favourites and then together finally the winner.

3. Announcement
The winner of the ‘LetterOne RISING STARS Jazz Award’ will be officially announced on December 3, 2018