Dizzy’s Summer – Beauty and the Beat! 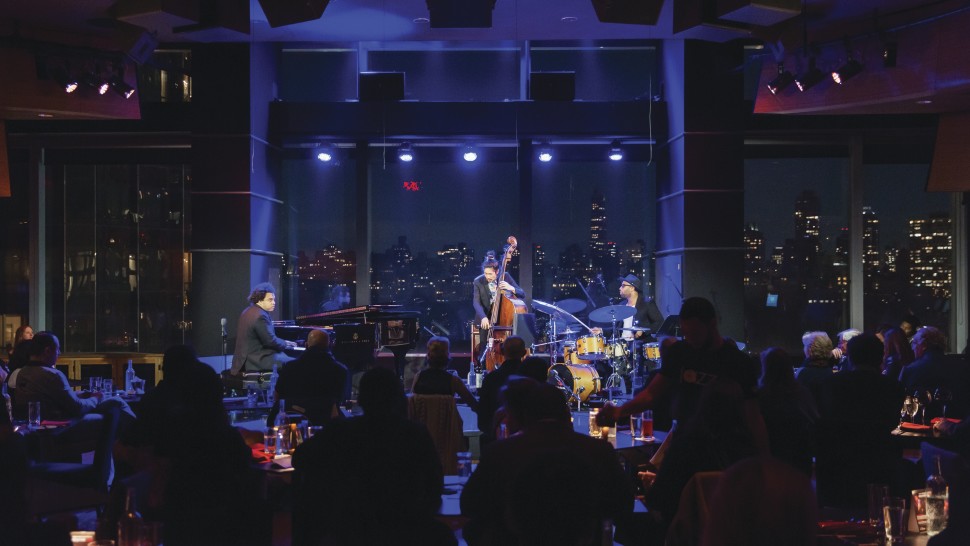 Dizzy’s Club Coca-Cola has another exciting summer schedule and continues to be on the bucket list of jazz lovers worldwide! New York City regulars find that the comfort, the beautiful view, and world-class talent keep them coming back for more. In addition to the club’s fine staff, including General Manager Roland Chassagne and Manager Desmond Prass, much of the continued success of booking the club rests on the shoulders of Georgina Javor, Assistant Director of Programming, Concerts and Touring at Jazz at Lincoln Center.

“We’re thrilled to curate special celebrations at Dizzy’s all summer long,” says Javor, “including an evening honoring the centennial of Nelson Mandela with jazz musicians from South Africa, a tribute to the great Abbey Lincoln from the vocalist Claudia Acuña, and three nights of the Ertegun Jazz Hall of Fame Festival honoring Nina Simone, Nat “King” Cole, and Jimmie Blanton. You’ll also see emerging artists making their Dizzy’s headlining debuts: saxophonist Lakecia Benjamin and violinist and composer Meg Okura. And it wouldn’t be summer at Dizzy’s without return engagements from the tremendous vocalist Catherine Russell and the legendary trumpeter Jon Faddis for his 65th birthday party.”

With musicians from countries including Chile, Brazil, Canada, Cuba, the U.S. Virgin Islands, and the United States taking the stage, you will be delighted with jazz from all corners of the Earth. Dion Parson & 21st Century Band will celebrate its 20-year anniversary as a band at Dizzy’s Club Coca-Cola on June 8–10, 2018. Parson explains, “This journey began when Ron Blake and I created a musical platform featuring the unique cultural heritage of the U.S. Virgin Islands. A true fusion of traditional Caribbean Music and its rhythms with jazz harmonies, which lent itself to the foundation of our first recording, entitled 21st Century, in 1998. Since then, the band has recorded a total of five albums, two of which were live recordings at Dizzy’s Club Coca-Cola, in 2010 and 2012. Over the years the ‘sound story’ of the band has evolved and established itself within the Caribbean and jazz community.

The versatility of the band and the unique blend of the music paved the way for the 21st Century Band Jazz Institute, at Snow Pond Center for the Arts in Sydney, Maine…introducing rhythms of the Caribbean through the adaptation of original and standard jazz repertoire. This year’s performances are greatly anticipated, and we invite you to join us as we celebrate our musical journey of 20 years!” Other June highlights include Jazz at Lincoln Center Orchestra tenor saxophonist Victor Goines on June 14–17, an album release party on June 20 with the Shamie Royston Trio and special guests Jaleel Shaw and Lee Hogans, and the sensational vocalist Ann Hampton Callaway on June 21–24.

On July 11–12, Chilean songstress Claudia Acuña returns to Dizzy’s with A Tribute to Abbey Lincoln, followed by July 13–15 with the Roni Ben-Hur Quartet and special guest Joyce Moreno. “We are thrilled to be back at Dizzy’s, a most wonderful place to perform,” says Ben-Hur. “This time I will be there with an exceptional group of musicians from Brazil, paying homage to some of the legendary composers from that culturally rich and fascinating country. Expect uplifting sambas, sensual bossa novas, and much more, all infused with a New York jazz spice. I am especially excited about our special guest, legendary songstress Joyce Moreno. A true master of this music, Joyce has been on the vanguard of the evolution of Brazilian music and has charmed people around the world for many decades. I feel very fortunate to share the stage with her, and it will be a memorable experience to everyone in the room to hear her.”

A member of Dion Parson & 21st Century Band, Provost steps out on his own here with his own group. “I’m excited to be back at Dizzy’s twice this summer, sharing the stage with so many of my favorite musicians. The incredible sound, food, audience, view, and musical presentation really make Dizzy’s the world’s preeminent jazz club. In June I’m reuniting with my fellow Virgin Islanders Dion Parson and Ron Blake and the 21st Century Band. In August I’ll lead my own group with Alex Brown (piano), Zach Brown (bass), Billy Williams (drums), and maybe even a few surprise guests. We’ll premiere lots of new music I’ve been working on recently, drawing inspiration from the devastating hurricanes that struck the Caribbean last September. I’m looking forward to seeing you there!”

August keeps burnin’ hot with the Ben Wolfe Sextet featuring Tom Harrell on August 2–5, and the month keeps smokin’ on August 8–9 when Canadian Jane Bunnett and Maqueque, the all-female Cuban band, come to town. “It’s been an amazing year for Maqueque!,” Bunnett says proudly. “My second album, Oddara, was nominated for a Grammy Award, and the band was featured on the NPR and Jazz at Lincoln Center radio show Jazz Night in America, hosted by Christian McBride. We have upcoming performances at Newport and Monterey, and we’re recording our third record at the end of the year. The band is growing in leaps and bounds and is truly a force to be reckoned with.”

Meanwhile, on August 10–12 another great Jazz at Lincoln Center Orchestra standout—multi-instrumentalist Ted Nash—returns to familiar ground with his quintet including Gary Versace (piano), Rufus Reid (bass), Matt Wilson (drums), Warren Wolf, (vibraphone, 8/10 & 8/11), and Joseph Doubleday (8/12). Nash notes, “I always look forward to making music in New York’s most beautiful jazz club. The intimacy that results from the proximity of the audience (not to mention the breathtaking view and excellent menu) inspires great music and a memorable evening. I love playing in all the spaces (Rose Theater and The Appel Room) at Jazz at Lincoln Center, but it’s in Dizzy’s where the musicians stretch and let it all hang out.”

On August 14–19 and August 21–26, in comes Trio da Paz & Friends with Maucha Adnet, Harry Allen, and Claudio Roditi. This is a hot one! “Trio da Paz has been playing together for over 30 years, and we have been blessed to play every summer, two weeks at the time, for the last 14 years at Dizzy’s Club Coca-Cola,” exclaims Duduka da Fonseca. “The sound is always great, the staff is wonderful, and the food is delicious. What else can one ask for? Thank you very much to Wynton Marsalis and everyone involved in making all this possible.”

This is just a sampling of the hard- swingin’ fun to come to Dizzy’s this summer. Be sure to check jazz.org/dizzys for the complete listings. Make your reservations now and bring your friends!