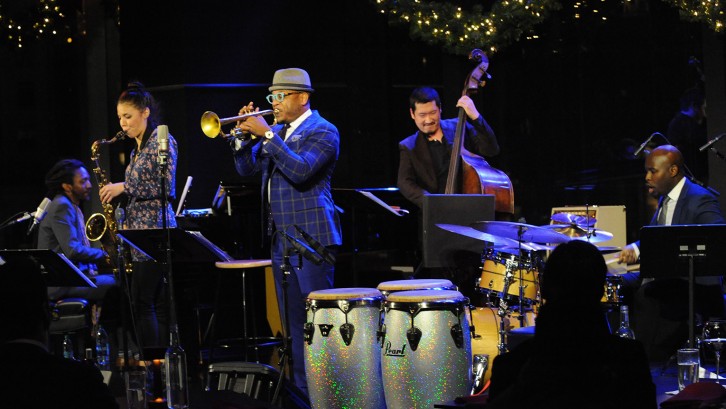 Grammy Award-winning drummer, composer, and bandleader Owens explained the origin of this gathering of forces: “The Swing Collective was an idea I presented to Jazz at Lincoln Center’s  Director of Programming & Touring, Jason Olaine. The project would encompass a group of very celebrated musicians within a younger generation that are really making a global statement with the music. Each of us comes from different cultures, but we all love to swing and create music on a high level. Also this group could create a different sound aesthetic under the Jazz at Lincoln Center brand that could reach a broad and new audience.

“I have respected and loved Etienne Charles as a player, composer, and bandleader since knowing him in Florida and for how he has interwoven the best of his Caribbean heritage into the music. Melissa Aldana is a stellar tenor saxophonist, and she and I have been talking about working together for years. Yasushi Nakamura is simply my rock, and he and I have been in many bands together. He also is one of the most in-demand bassists of our generation. Elio Villafranca and I have known each other since our days playing at Cafe Creole in Harlem and doing sessions for Arnie Perez. Elio is a brilliant composer and pianist and such an intellect regarding Cuban and jazz music.

Prior to the concert, Owens went on to say… “With all of these personalities, I wondered if it would work, and last year at Dizzy’s we had a chance to play together for two nights and it was just amazing! The blend of music, compositions, and the spirit in which we performed really showcased the future of this music. I am excited about this concert in March, and we intend to play select compositions from everyone and compose a few new pieces that were created with this ensemble in mind.”

Melissa Aldana made history in 2013 as the first female instrumentalist to win the prestigious Thelonious Monk International Jazz Competition. The tenor player has since been solidifying her presence on the jazz landscape as a prolific bandleader and soloist. Fellow saxophonist Greg Osby proclaims, “She will absolutely be a trendsetter for her generation.” Aldana, who lists Sonny Rollins, Don Byas, and Mark Turner as her influences, says of the Swing Collective, “This concert is a great opportunity for me to write new music for musicians that I don’t usually get to play with. The fact that everyone has a different background brings different influences to the music. I have been working on a new composition called ‘Andalhua,’ which means ‘Place of the Sun’ in Mapudungun [language of the Chilean Indians from the South, Mapuches].

Elio Villafranca has presented his exciting mastery of the piano many times to appreciative audiences at Jazz at Lincoln Center, and the Steinway Artist’s technical skills are breathtaking. “This particular band, everyone is from completely different countries, and yet we all are writing and arranging using the same common language of jazz, which basically is why we are all here in New York… in America… the one common thing that we have is jazz. This is what jazz is today—a mix of cultures.  This is what the future of jazz is. It doesn’t belong anymore to one particular location… it is the world language. Jazz was born in America, but it has impacted the world in a very profound way, which makes this kind of concert possible.”

Yasushi Nakamura brings his rhythmic contributions to the group as one of the hardest working bassists in the business. “I’m honored to be part of the Swing Collective,” he shares. “This group is unique, as we are musicians from all over the world… the The Swing Collective USA, Chile, Cuba, Trinidad, and Japan, and we unite ourselves with jazz. Each of us contributes compositions and arrangements. You can hear our influences and different takes on each composition. We’ll definitely swing hard, groove, and play our hearts out!”

Etienne Charles is a 2015 Guggenheim Fellow with a special style showcasing his blend of Afro-Caribbean musical traditions mixed with a passionate feel for the jazz idiom.

I caught up with Charles by phone while he was on the road in Haiti after just leaving his homeland of Trinidad.  “It is a group of players, and it is also a group of bandleaders, which is interesting. Everybody brings a similar, yet different viewpoint to the table, which is cool. Melissa is a great writer and soloist. Elio has done a lot of writing… a lot of writing of original music.”

He explains, “It is very easy when you have a band of leaders coming together, because they’re all understanding of getting messages across on a really high level. I hope to bring some melodic concept as a composer. Everybody in the band is from somewhere else, so everybody has their own vibe, I would say. It was really cool last time, when we did Dizzy’s Club.