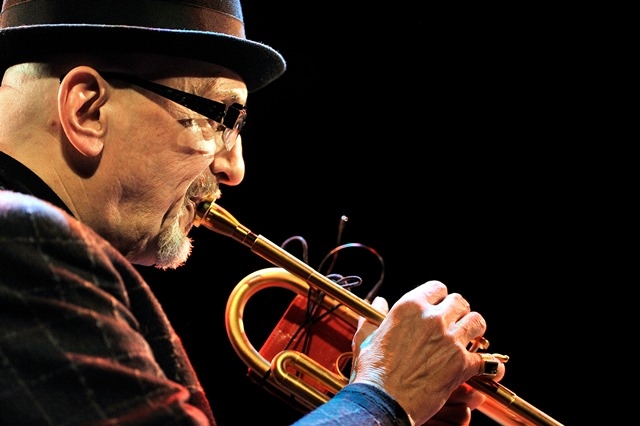 Tomasz Stanko is a singular trumpeter and veteran on the European jazz scene, and with his New York quartet with three high profile younger players, it’s an opportunity to see an exceptional unit led by Stanko who is always striving for a new direction in his sound.

This Polish trumpeter’s music has evolved from his earlier and wilder times in the 60s, when he was most influenced by Ornette Coleman and blowing freely with the best in Communist Poland, like Adam Makowitz and Krzysztof Komeda, then in the early 70s, with West European free-jazz heavyweights, the Globe Unity Orchestra, which included Alexander von Schlippenbach, Evan Parker, and Peter Brotzman, and finally in the early 80s in New York City with the eminent American free-jazz pianist Cecil Taylor.

Later Tomasz Stanko’s sound became distinctive for its ability to seemingly defy motion. Like Miles Davis on his Kind of Blue album, the calmer sounds from Stanko’s horn, and from the other instruments seem suspended in a state or emotion of solemnity. In another similarity to Miles Davis’ later recordings, Stanko’s sound hovers, as practically the same song over and over in variations, particularly on his best known and most atmospheric or cinematic recordings, “The Soul of Things” and “Suspended Night” both on ECM.

Stanko’s Polish quartet’s recording “Lontano” (2006) on ECM is not as moody and atmospheric as their two previous recordings, “Soul of Things” and “Suspended Night.” For “Lontano” changing their recording place from Norway to a village near Avignon, in France may have had something to do with it. Stanko also said in a previous interview that “Lontano” was influenced by that group’s extensive tour of the Far East, as well.

On his recordings with Polish players, overall, Tomasz Stanko seems to create with his quartet a musical bed of subconscious feelings that Stanko then floats in and out of, building or bringing the sound up to emotional peaks, a tenseness though a relief at the same time. Then the moody or haunting crescendo of solemn peaks starts again.

Stanko’s New York Quartet takes it to a noticeably faster pace, though, with Cuban-born David Viralles on piano, Reuben Rogers on bass, and Gerald Cleaver on drums. This group recorded “Wislawa” (2013) on ECM and their newest recording “December Avenue” was released in March 2017 also on ECM. With the New York Quartet there are also more frequent standard solos, and Viralles brings in an upbeat latin jazz element that often pushes Stanko away from his tendency for the more melancholic rise and calm.

Stanko has said this about the influence of touring and places for his recordings. In an interview with Cezary Lerski he said, “Just the experience of being on the road, playing to very different audiences helps me to change, personally….it’s almost a policy not to have expectations. As an improviser I want to be open to the whole atmosphere.”

This philosophy of his is naturally reflected in the sound with his New York Quartet on their latest recording “December Avenue” mostly an ode to New York City, though it also has tracks with titles like “Ballad for Bruno Schultz” who was a Polish-Jewish writer and illustrator that was shot dead on the street in Cracow by a Nazi gestapo in 1942.

Whether with his Polish or New York quartet, in any case, there is always a push to reach a sublime state, which makes Tomasz Stanko’s music exceptional and difficult to find in our times. It is hard to categorize, which for most artists is a sure sign of success in itself.

Find out more about this artist here: Tomasz Stanko