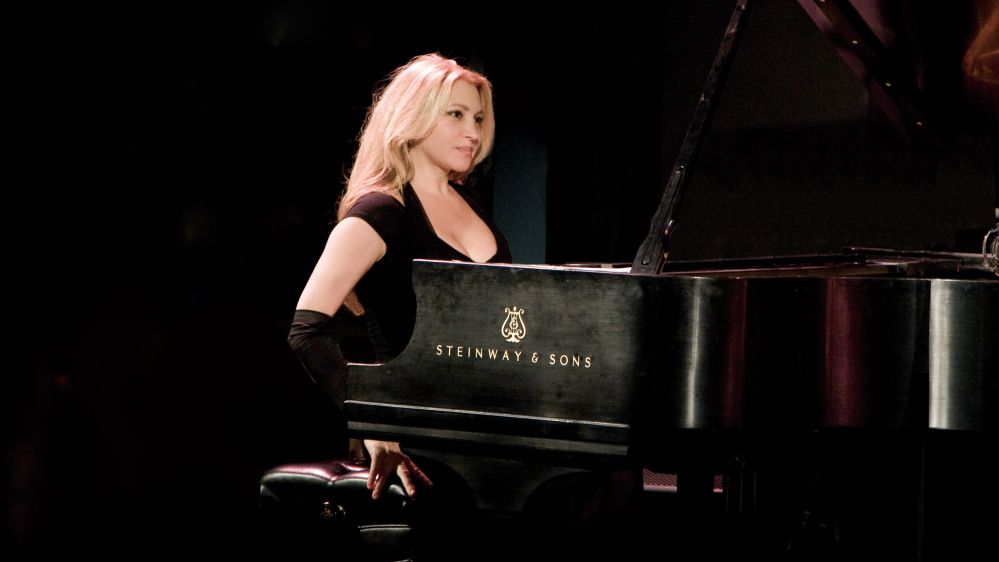 With the swinging music of the legendary Bill Evans and the sensuous sounds of samba soaring through the air, Rose Theater comes alive on November 3–4 as pianist, singer, composer, and Grammy Award winner Eliane Elias takes the stage.

For the first half of the show, she’s joined by bassist Marc Johnson and drummer Joe LaBarbera—both members of the Bill Evans’ last trio. This first set before intermission will be devoted to their deep love for Bill Evans’ timeless music. The second half of the show showcases Brazilian music and its colorful rhythms, performed by a whole new band. Elias is an expert in both of these musical worlds, and her outstanding Made in Brazil album recently won the 2016 Grammy Award for Best Latin Jazz Album.

“Its really going to be an exciting program showcasing Eliane and the depth of her musicianship and her whole body of work, which is pretty vast and deep,” says Marc Johnson. In 2007, the pair released a recording entitled Something For You, which is a tribute to Bill Evans.  Johnson says the first half of the show will present some of that material and some of Evans’ more exuberant and happy compositions. “It won’t be so brooding and melancholy. It will be up…both sets will be up!” exclaims Johnson, Elias’ bassist and husband.

Johnson explains, “Eliane was transcribing Bill Evans music by the time she was 10 years old. She takes that special aspect of harmony way beyond what you can imagine, and she brings a lot of other things to the table, because she has influences from Bill, but also from bebop, blues, and, of course, the Brazilian rhythm. I think she’s the only one that could perform this particular concert so authentically and organically.”

Johnson’s credits include recordings with Joe Lovano, Michael Brecker, Stan Getz, Pat Metheny, and many more. He is a seasoned veteran composer and bandleader, but joining the Bill Evans Trio in 1978 is really what sent him on his way to becoming the incredible talent he is today. Drummer Joe LaBarbera honed his chops with Joe Farrell and Chuck Mangione before joining the Bill Evans Trio. He went on to perform with Phil Woods, Art Farmer, Art Pepper, Bob Brookmeyer, Toots Thielemans, and Tony Bennett.

Elias chimes in: “As a pianist, the beauty of Bill Evans’ music was that his playing was so melodic and with such harmony. The way he played trio was a conversation and interplay; it was a dialogue with the musicians.  Marc Johnson and Joe LaBarbera are both masters of the interplay.”

The first portion of this performance will be mostly instrumental. The second half is a “Brazilian journey” that will dive straight into the exuberance and excitement of the culturally rich country. To date, Elias has 26 releases to her credit, selling more than 2 million albums worldwide. Jazziz magazine refers to her as “a citizen of the world” and “an artist beyond category.” Following her Grammy Award-winning Made in Brazil, Elias’ 2017 release, Dance of Time, is another Latin gem, currently topping the Billboard charts and Amazon.com sales charts.

“Both recordings bring some samba. Dance of Time is a tribute to the samba, which celebrates 100 years in existence. Samba already had a characteristic that belongs to jazz music—improvisational qualities.  Samba’s rhythm is our great Brazilian export. It is from the African roots and Bahia and has expanded all over the world. It is loved by all—from poor people to the rich. It is something that touches everybody’s heart.  It is such a magical rhythm that you cannot not feel! It is so contagious.  The authenticity of that music is going to be brought to this concert. It runs in my blood. I am bringing master musicians with me, including drummer Rafael Barata and guitarist Rubens de La Corte, and there is no Brazilian bassist that can play it like Marc plays it! He is such a virtuoso.”

Brazil-born and New York-based Rubens de La Corte combines Brazilian music with jazz, rock, and world beats in a unique style. Also from Brazil, Rafael Barata is a self-taught drummer who began playing at age five and is known for his work with Eliane Elias.

Elias promises a magical evening. “It’s joy, it’s love, it’s cheerful. I have done several programs like this at SFJAZZ, but I have never done two programs in the same concert like these shows at Jazz at Lincoln Center. Rose Theater is such a gorgeous theater with the great acoustics and sound there. I am very happy to be doing this.

“I love the audience and I think they really can feel that it is genuine. We are so immersed in it. They will have a great time. To me, the greatest joy is having the people feel happy… coming to the concert and having those moments of real joy and happiness and getting away from the everyday stress. They will be energized. I love it!”

For more information and the full schedule, visit jazz.org or call CenterCharge at 212-721-6500 for tickets.

The Jazz at Lincoln Center Box Office is located on Broadway at 60th Street, Ground Floor.