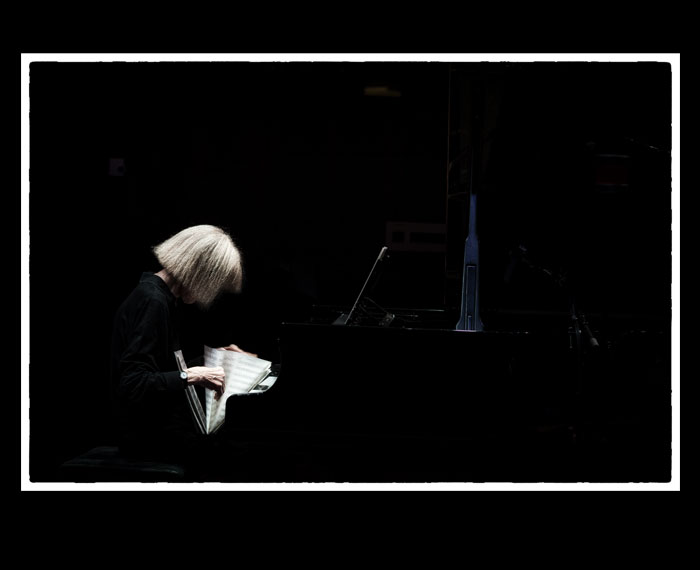 Carla Bley is a highly regarded jazz composer and pianist and her trio with bassist Steve Swallow and tenor saxophonist Andy Sheppard is a first-rate unit. She began playing with Steve Swallow in the mid-60s, and as they’ve been a couple almost since that time, as well, both musical and life collaborators, their upcoming European tour is appropriately timed for the 50th Anniversary of the Summer of Love.

Carla (born as Lovella May Borg in 1936) came onto the scene in New York City at the beginning of the 60s, initially as a composer when free jazz was on the rise and she and her circle were part of that new sound, though she does not consider herself a free jazz musician anymore. “I only played free until I learned how to play changes—now I never play free,” she once told me.

In 1960, the Canadian pianist Paul Bley was already well-known in New York as a member of George Russell’s group, and Bley’s earliest releases as a leader included compositions by Carla Bley, his new wife, from Oakland, California, who had moved to New York in the late 1950s, and initially worked as a cigarette girl in jazz clubs, while listening carefully to all of the musicians. Paul’s recording of Carla’s composition “Vashkar” on his album “Footloose” (1964) was her first breakthrough.

Paul Bley had impressive players, including Steve Swallow (born 1940) on double-bass for his trio. During this time, Bley was also playing with Jimmy Giuffre, the experimental and influential West Coast cool jazz clarinetist, saxophonist, and composer, while Steve Swallow was also part of the seminal Giuffre 3. Their modest, though highly imaginative and minimalist sound, from recordings in 1961, like “Fusion” and “Thesis” was decades ahead of its time, while so many wily jazz-improv players today, playing the same as Giuffre 3, circa 1960, consider themselves to be on the cutting edge.

By the mid-60s, Swallow had joined the Gary Burton Quartet with a different take on jazz-fusion along with Larry Coryell on guitar. Then by the 70s, Swallow switched to electric bass (with no turning back). By mid-decade, he also began playing with Carla, including recording sessions and tours as a duo. Swallow and Carla Bley eventually became life partners together now for at least over forty years.

They live together in a remote coastal area of Northern California, off the grid and in a true Bohemia.

In more recent times, Swallow (originally from New Jersey) is best-known for playing with the John Scofield Trio (with Bill Stewart on drums), while Bley is best-known for her collaboration with Charlie Haden’s Liberation Orchestra, and non-jazz excursions such as sessions with drummer Jack Bruce (from Cream), and Anton Fier’s Golden Palominos. She also has had a long string of recordings as a leader with groups of various sizes, but her duo recordings with Swallow are the most playful, intimate and they have an unmatched intuitiveness, no doubt as a result of their long-term relationship.

Besides her close bond with Swallow, Carla has the tendency to use the same musicians for her own groups. “There has never been a conscious decision to keep using the same players, but if it isn’t broken, don’t fix it,” she says.

Her long-standing trio with Swallow and Andy Sheppard is such a case. Sheppard (born 1957, in Wiltshire, England) first joined Carla’s group in 1987 just before the recording of her album “Fleur Carnivore,” and he has recorded on twelve of her albums since then; however, their 2013 recording for ECM was their first-time as a trio. “Trios” is a gesture of looking back and moving forward at once.

Most of the tracks on “Trios” have been recorded before, including “Vashkar” and several three-part suites, including “Les Trois Lagons—d’apres Henri Matisse,”  “Wildlife—Horns/Paws Without Claws/Sex with Birds,” and “The Girl Who Cried Champagne—Parts 1, 2, 3.” But the new recordings seem truer to the essence, honed and pruned down over time to perfection in execution and feeling.

And just before “Trios” with Bley and Swallow, Shepard recorded his own acoustic-improv project, “Trio Libero” (ECM) in 2012, with the Algerian-Parisian bassist Michel Benita, and Seb Rochford, the London-based, hyper-active Scottish alternative jazz drummer from Polar Bear and Sons of Kemet.

Bley, Swallow, and Shepard come together as the Carla Bley Trio for a perfectly-timed summer tour in Europe. Long-time partners in music and intimacy apt for the 50th anniversary of the Summer of Love.

The Carla Bley Trio – Trios European tour in May 2017, kicks off in Prague.