Fiona Mactaggart is the founder of the fantastic ‘Scottish Jazz Space’ a site she created to explore, support and promote the rich Jazz scene in Scotland. Although Fiona had been a huge supporter of the creative arts for many years, it was not until her retirement from her outstanding work for the NHS that she found the time to work on this important project. She is highly valued and respected writer, ‘Her connection to the music she writes about, the thoroughness of her knowledge and joy in sharing her insight shines through her effortless prose. Her writing is as engaging as it is expressive and continues to encapsulate the essence of a multitude of diverse new releases’ Simon Thacker

There is a hugely rich jazz scene in Scotland and Fiona’s passion, thankfully, led her to raise awareness and support artists and more through the creation of her site. Fiona and I had a fascinating conversation about Jazz, Scotland and kindness.

‘I thought more people deserve to know about this music and that’s really what I tried to do, promote, particularly the new, young ones but also the people that are ignored perhaps by some of the press, such as the older groups that have been around for a long time and still doing amazing things. Educators, who are really important for musicians coming up and sound engineers, other promoters and groups, I just wanted the whole package, not just the bands, the musicians or the composers. I think perhaps coming from a clinical background, I see things in terms of systems rather than little individuals on their own little island, it’s about the whole. I believe everyone is equally important, you can’t do everything on your own in this industry, you need someone to write about you, to light you, to sell you, to make sure they can hear you, to play with you – it is a team thing’.

FR: It really is, and I do wish more people approached the industry in that way. It is fascinating to hear you talk about your clinical background and how this way of working, of thinking, transfers to Jazz.

FT: I think there are overlaps in lots of ways. There is a narrowness of thinking, as in the women, it’s the singers, the vocalists and that’s wonderful but what about all the others who are amazing? Saxophonists or pianists, where are they? I haven’t worked it out yet but I’m sure others maybe have, this unconscious devaluation of women, it’s just so obvious. I remember in my 20s, I went for a couple of months and travelled round India and thought this is shocking, this devaluation of women, it’s not like this in Britain, then went back to Britain and thought oh yes, it is, it’s just more covert, it’s more subtle. But it’s still here, you know many decades later. It’s actually a waste, it’s like half of the British people, half of the human race are not encouraged to achieve their potential and it happens in jazz, just as it happens everywhere else.

FR: So many things to explore there…but firstly the issue of diversity. How do you choose who you feature?

FT: Well, I aim for women, new people, people I think are wrongly marginalised like older groups or educators. I guess the other thing is who I like, their music. Of course it’s purely subjective, it’s me that thinks they’re amazing, but the next person might think what a load of rubbish. But I suppose I’m arrogant enough to think that, well, I’m quite old and I’ve listened to music seriously since I was about 8 or 9, so I guess I kind of understand when someone is doing something reasonably valuable or reasonably evolved. People who are evolved and doing something kind of distinctive; in other words they are true creatives. But whatever the quality or the type, their genre, it’s their child, it’s their infant, they’ve been brave enough to put their work out there, in the public domain so how dare someone just come along and strike it down. I think kindness is sometimes lacking and is one of these unfashionable things that actually is really, really important. 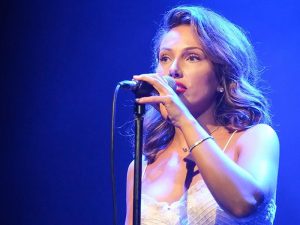 FR: Kindness? Oh yes! It’s a harsh world out there, especially on social media and in the world of reviews. It makes you wonder why people are writing about an artist if they dislike them so much. Earlier, you were saying you’ve obviously always had an appreciation for the arts and different types of music so what was it about Jazz that pulled you in enough to create this space and support the industry?

FT: I do like other forms of music and sometimes I feel that choosing the name Scottish Jazz Space is a bit of a misnomer, because I don’t limit to writing and featuring just jazz, I would put in anything that is questioning or a little bit odd, intelligent or very evolved, anything I think is interesting. Again, a very personable, subjective choice but as the owner of it, as it were, I can do what I like. I mean jazz particularly, is very evolved. It’s a mixture of complexity & simplicity but mainly complexity which I like and pattern – I love pattern. So, pattern and the emphasis in many jazzers of improvisation I think to me, is the ultimate in creativity, being able to create in the moment and not worry about it, just do it and engage, it’s there, its ephemeral… it’s there one moment gone the next, which makes it, to my mind all the more beautiful. I suppose one worry I have is the site being called a Jazz Space – jazz is a dirty word for some people. As soon as I say to people, say from my clinical background, that I write about jazz they go ‘ah, right ok’ then onto something else.

FR: It’s got a bad reputation in some ways.

FT: Yes, it really has. The importance of words…we see that in the way that the mass media uses words to control the discourse in society and it’s the same. I’d love to study ‘why has jazz become a dirty word’. The most amazing entities nowadays, why is that? It’s mad.

FR: That would be an incredible study to do! But before we digress too much, as much as I would love to… Scotland, the Scottish Jazz scene. What are Scottish musicians bringing into the scene? Is there something that stands out, that makes Scottish Jazz, well, Scottish?

FT: I think just living in Scotland it’s kind of hard to avoid Scottish traditional music and not just for those of us that are interested in the likes of Celtic Connections, but you dance to Scottish music at school, it’s on the radio, you know people that are into Scottish music. The size of Scotland, the jazz musicians, or the Western Classical musicians who know trad musicians and they will play in each other’s groups so it’s just there is. It’s a great cross fertilisation that’s been going for on a long time since John Rae Collective. Lots of people do that, Brian Kellock, I mean there is so many, Fergus McCreadie of course.

FR: Do you see the younger generation of musicians, perhaps bringing in different genres, more commercial music for example and blending it with jazz? Does that happen in Scotland?

FT: Well not so much that, it’s the traditional music, so Fergus McCreadie, you know and lots of others, have been doing it here for ages. There’s a new energy about them. There’s the group Mezcla, they’re quite young, they are jazz and mainly South American, Central South American style crossover, that’s beautiful and energetic. But not so much the hip hop or the other sort of genres. It’s Scottish trad and actually I think that’s fine, because part of what’s happening in London and the South East is to do with the mix of immigrants that have come in, second, third, fourth generation, whereas here there’s really not been so much presence of immigrants to Scotland. It’s exciting because there’s a whole generation who are incredibly, technically proficient and really rushing through their training and often going through the Scottish National Youth Jazz Orchestra and then onto the Jazz Orchestra and then starting their own bands. I think it’s absorbing influences from all over the world, thanks to the availability of music from all over the world. There’s a richness, a wealth of music out there for people who are interested in music now. 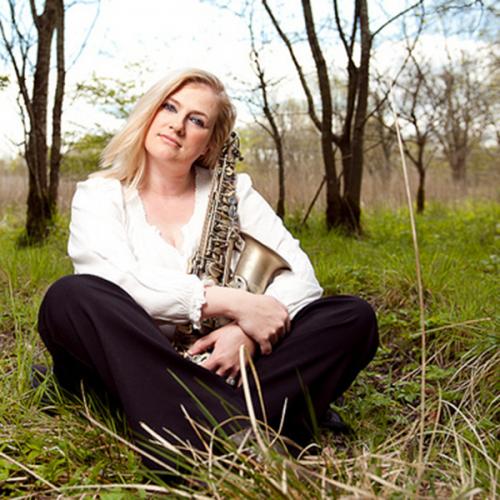 FR: Can you share with us some female Scottish artists that you feel people should be listening to?

FT: Oh yes, well Laura MacDonald! A saxophonist who has been around for a while doing some amazing work and I don’t know why on earth she is not more well-known. She’s so amazing you think she would be more so.

FR: What’s amazing about her?

FT: I don’t know, she’s just got a beautiful sound, it’s very melodious, it’s lyrical, it sounds just gorgeous! Gorgeous, is how I’d characterise it. Bernadette Kellerman who plays the violin in both trad and jazz and quite experimental stuff, really interesting what she’s doing. Seonaid Atkin, of course, really lovely and she’s also started out in folk music and has a beautiful jazz singing voice. Carol Kidd, of course is a beautiful vocalist. Sophie Bancroft is a singer and guitarist. She’s beautiful, beautiful voice and really interesting lyrics. Quite a few interesting women have left Scotland, like Helena Kay, tenor saxophonist has gone off to American and Anna Meredith, she does a lot of really interesting stuff, I don’t know if you’d call it jazz. It’s kind of electronic, hardcore electronic modern classical, I don’t know what you’d call it. I put her in this group because it’s just so creative, she’s moved down to London. There are lots of others.

FR: Most people would have heard of someone like Evelyn Glennie for example but there is so much talent in Scotland we need to know about. I must mention the incredible Luca Manning who has become very well established. What an artist! Incredible work. Luca has just started a new podcast series too with another fellow Scot Kim Macari. It’s brilliant and definitely worth listening to.

I hope our conversation and inspired you to explore the Jazz scene in Scotland, and a huge thank you to Fiona for her important work supporting the music in Scotland!