The trio of guitarist Ricardo Pinheiro, drummer Eric Ineke and bassist Massimo Cavalli have released a new CD titled ‘Turn Out The Stars – The Music of Bill Evans’ and is the follow-up to ‘Triplicity’ (2018). It’s obvious that the musicians know each other well as the seven songs on the CD are recorded in one day: quality does not deny itself. The arrangements were also made collaboratively by the musicians and what is most striking is that the musicians give the songs a lot of space. 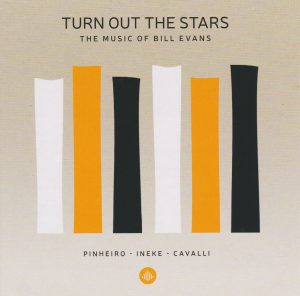 Given the subject of the music the idea of a trio without a piano works out well as the line-up of guitar, bass and drums manage to give Bill Evans’ music its own atmosphere. The CD consists of five compositions by the American (1929-1980), who is considered one of the most influential pianists in jazz. Michel Legrand’s ‘You Must Believe in Spring’ and Leonard Bernstein’s ‘Some Other Time’, both Evans’s stalwarts, are also included.

Bill Evans starred on the album ‘Kind of Blue (1959), Miles Davis’ most famous record and which is considered by many to be the most influential work of the legendary trumpeter. It is also one of the best-selling jazz albums of all time. In my mind The song the Bill Evans composition ‘Blue in Green’ is the highlight. It is a true masterpiece, which does justice to Miles Davis’ style of playing, and confirmed the reputation of the pianist as a composer as well.

However, Bill Evans felt most at home in a trio. The most famous was with bassist Scott LaFaro and drummer Paul Motian, in the late 1950s and early 1960s. Albums such as ‘Sunday at the Village Vanguard’ and ‘Waltz for Debby’ gave birth to a new era for the piano trio: drums and bass were emancipated as full partners of the piano.

The composition ‘Waltz for Debby’ is also not missing from the CD. I keep finding it a mesmerizing tune that never bores me. On this recording, the intro to the song played by the Portuguese guitarist, Italian bassist and Dutch drummer is a thing of great beauty. On ‘Some Other Time’ there is a leading role for Massimo Cavalli, who has lived in Portugal for quite some time, this composition by Leonard Bernstein concludes the CD. Bernstein mixed his great talent as a classical composer and conductor with the rather young American music culture, in which jazz and musical play an important role.

The CD opens with ‘You Must Believe in Spring’ by Michel Legrand. Immediately the listener experiences the smooth swing of guitarist Ricardo Pinheiro. He leaves a lot of space between the notes and that makes way for a pleasant swing. All in all, it is a tasteful CD, which fits well with spring.