If my memory serves me, well it was around 2005 that I was having lunch with Joe Diorio in a restaurant in Pasadena, California. I went to visit him for his Birthday and later that afternoon we spent some time jamming in his apartment. So, during lunch, he told me “Hey Simone you know what’s the best instrument to comp the guitar? Another guitar!” It sounded scary but true. Duality, the new album out on Lunaria Records by Tom Remon and Jim Mullen reminds me of that moment, the session we had and of course that statement. 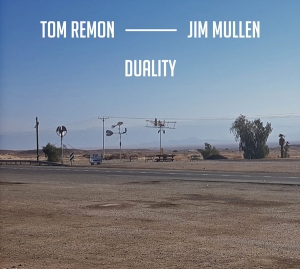 Duality is a friendly and intimate collection of eleven tracks, a good mix between standards and original compositions played by two generations of guitarists. The rising star Tom Remon and the living legend Jim Mullen. Immediately, when I started to listen the opening track ‘East of the Sun West of the Moon’, I had the feeling of sitting with the two artists in the living room attending a special house concert. The Bossa Nova interpretation given to the song, the mellow flavor and the interplay appears evident from the first few notes. The album could be interpreted as a tribute to a whole range of guitarists, yet with a significant personal touch. The reading of ‘With a song in my heart’ winks to Jim Hall’s arrangement of this nice standard and ‘Whisper not’ takes the listener in the direction of the style of Wes Montgomery, however with a different twist: here the time is changed in 5/4.

The language of these two musicians is modern and yet respectful of the tradition at the same time. You can hear a constant mutual respect by the two in their improvisation. You can hear that both Jim and Tom are engaging in a flowing and empathic conversation which is very present in ‘Fall’, (The wonderful ballad composed by Wayne Shorter for Miles Davis in 1967 and present in the album ‘Nefertiti’) and even more in ‘You and the Night and the Music’ which begins with a simultaneous solo.

For those readers that are familiar with my previous reviews they will know, I love to pay a lot of attention to original music and I really have a huge respect for the artists who challenge themselves by composing. Yes, there are few other standards in the album to check out however the three original songs are what I personally appreciated the most. The first one is ‘Sarah’, a brilliant and melodic 6/8 Minor Blues well exposed by Remon. This song reveals a story behind the scene translated in the intensity of the interplay and the solos. Remon says: “This tune is dedicated to a good friend of mine who helped me out through some really difficult times I went through a while back.”

Another composition by Tom Remon is ‘Jaffna’. Named after the city of the same name, Jaffna situated in the North of Sri-Lanka dominated over the centuries by the Portuguese who founded different missions, the Dutch and finally the English around 1795. The population of the city suffered the consequences of the civil war and recently, in December 2004, the damages cause by the tsunami. This aspect inspired Remon to compose this introspective and very touching tune.

The third original tune presented on the album is ‘G.P.J.’, an acronym to identify Grant, Peter and Jim. The origins of the song is a sort of continuum that started with Grant Green (for me one of the most underrated Jazz guitarists in the history) who wrote the Blues called ‘Outer Space’. The next step in the development came when Peter Bernstein wrote another tune based on the same chord changes of ‘Outer Space’ and changed it’s title to ‘Little Green Man’. At this point Remon chose to celebrate some of his heroes changing the structure of ‘Little Green Man’ by adding a bridge. Mullin contributed the melody finalizing a very energetic and powerful tune.

I really enjoyed this album and I recommend it. In this case the lockdown produced something really remarkable!