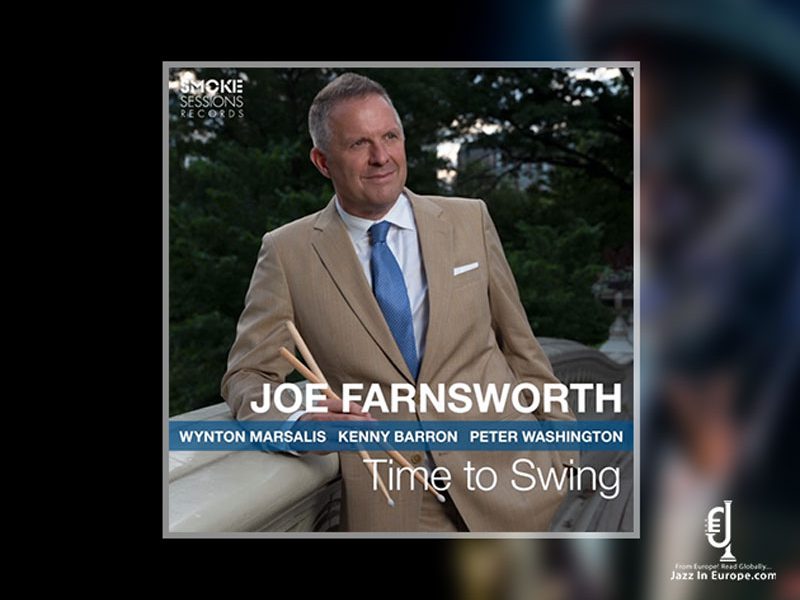 Showtime. The crack of a stick, signaling the downbeat and instigating that magical moment when years of practice, weeks of preparation and hours of gathering and waiting all transform into the alchemy of music. It’s that elusive feeling that Joe Farnsworth set out to capture on his latest release, Time To Swing. Led by one of the premiere straight-ahead drummers of his generation, the resulting music is an hour of joyful freedom, heartfelt emotion and electrifying communion. But it only results from the perfect combination of personalities, voices, tunes and feeling.

In the case of Time To Swing, available now via Smoke Sessions Records, the clock started ticking when Farnsworth invited jazz giant Wynton Marsalis to join him, legendary pianist Kenny Barron, and in-demand bassist Peter Washington for a once-in-a-lifetime recording. Farnsworth’s confidence stems not only from his growing recognition as one of the premiere straight-ahead drummers of his generation, but from wide-ranging experiences with some of the greatest artists working today.

You could dial the hands of time back to 1985, as the drummer was preparing to enter his senior year of high school and had his life changed by the release of Marsalis’ seminal Black Codes (From the Underground). “Suddenly you’ve got a whole new style of playing,” Farnsworth recalls. “I was young, but it felt like something new and modern was happening.”

Nearly two decades later, after building an impressive resume with legends such as Benny Golson, George Coleman, Curtis Fuller, Horace Silver, Cecil Payne, Harold Mabern, as well as Diana Krall, Farnsworth received the call from Marsalis that would result in the acclaimed Blue Note album Live at the House of Tribes, a date that the New York Times hailed as “fully alive and afire with ideas.”

The collaboration was the result of the kind of unconventional thinking that has made Marsalis the icon that he’s become in the jazz world. As Farnsworth recalls, “Wynton had been trying to scope me out a bit. The way he told it, a lot of guys were saying that I couldn’t play, that I was nothing – and he heard that so many times that he realized I must be playing well because it sounded like jealousy!”

The two continued to pursue separate paths from there, reconnecting from time to time under Marsalis’s auspices at the helm of Jazz at Lincoln Center. Most recently, Farnsworth joined the world-renowned Jazz at Lincoln Center Orchestra for a late-2018 tribute to Thelonious Monk, followed by the drummer being enlisted for the trumpeter’s stellar quintet to record the soundtrack for Edward Norton’s film Motherless Brooklyn. The time (to swing) was finally right, Farnsworth decided, to invite Marsalis to participate in a project of his own.

“I’ve been waiting for this moment since Live at the House of Tribes,” Farnsworth says. “I was a little hesitant to ask him because he’s so busy, but when you’re coming from the truth, you have nothing to worry about. And, he immediately said yes.”

Marsalis joins the band for the first four of the ten tracks on Time To Swing, vividly displaying the emotive virtuosity, bold tone and impeccable sense of swing that are his trademarks. “The way Wynton plays the trumpet is the way I want to play the ride cymbal,” Farnsworth marvels. “It’s pure joy. Playing time with him just hits to the core of me. His phrasing, his rhythm; that feeling’s never gone away. It actually got stronger over the last 20 years because I feel more confident and he’s only gotten better.”

With Time To Swing, Farnsworth does exactly that – not only bringing the invigorating feel that he invariably does to any piece of music, but also providing the time for some of modern jazz’s absolute best to work out, driven by the rush of his remarkable rhythms. As renowned drummer Billy Hart comments in his liner notes, “This whole record is happy,” and audiences will want to make their own time to revel in it.