Idris Ackamoor & The Pyramids newest release “An Angel Fell” (2019) unveils a shift or evolving sound incorporating groove, latin percussion, dub, and the cosmic jazz-pop with mystical lyrics ala Sun Ra at his most accessible. While the Pyramids’ previous sound and for many decades was more influenced by Art Ensemble of Chicago, the avant-garde side of Sun Ra’s Arkestra, Albert Ayler, John Coltrane, psychedelic rock, and Fela Kuti (Afro-Beat, Afro-Funk and African High Life) or African folk music, as they’ve been using vintage African instrumentation in their music since their beginning.

And what a long and strange musical and spiritual odyssey it has been for Idris Ackamoor & The Pyramids, who were previously known as simply The Pyramids, and initially identifying themselves as a spiritual and psychedelic jazz collective from the Mid-West, in Ohio, in the early 70s, yet officially they came together in Paris. By the mid-70s, after extraordinary travels and performances in Europe and Africa, they disbanded in 1977 after relocating to San Francisco. They reunited thirty years later, in 2007, and since then they seem to be more active on short tours in Europe than in the United States. 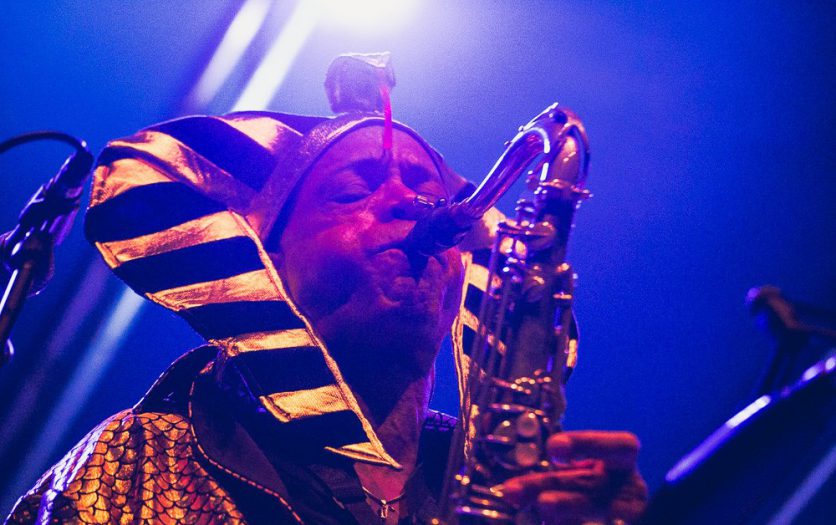 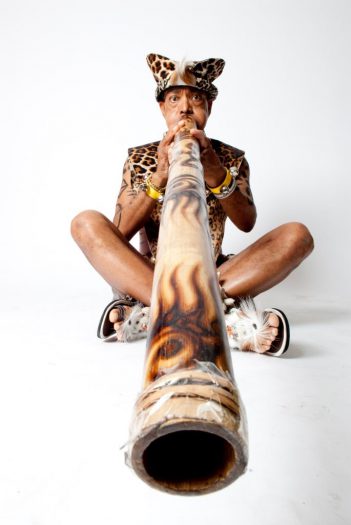 Alto saxophonist Idris Ackamoor (born in 1951) is the leading original member, who still keeps the group going. He met flautist Margaux Simmons and bassist Kimathi Asante as university students at Antioch College, in Yellow Springs, Ohio, and as bright politically radical students, they shared a passion for the rising free jazz scene of that era. They also initially came together under the tutelage of the avant-garde jazz pianist Cecil Taylor, and his 40-member Black Music Ensemble in 1971.

In 1972, Ackamoor, Simmons, and Asante went to Europe as cultural exchange students, where they soon met the drummer Donald Robinson, in Paris. Robinson was already living there, and playing with the fellow American free jazz saxophonist Frank Wright, and so with his addition, The Pyramids were formed–their name inspired by the most symbolic monuments of African and Egyptian culture.

They spent formative months together as a band in Amsterdam, taking in the alternative cultural capitol’s many attractions, but eventually they decided to travel to Africa, first to Morocco and Ethiopia eventually ending up living in a commune outside Accra, Ghana. From there, they travelled around Africa, collecting instruments like the bailophone (African thumb piano) in Ghana or the Uganda harp in Kenya, and playing with African musicians to hone their own non-traditional improvisational sound.

Equally important to their sound is their live performance, inspired by African rituals with body-paints and costumes, and in this way, similarly to Sun Ra’s Archestra. Thus they are a performance troupe at heart. Along with Ackamoor, another original-core member flautist Margaux Simmons is on this European tour accompanied by long-time members Sandra Poindexter and long-time collaborator on guitar, Bobby Cobb. There are also two new members from London including Jack Yglesius (from the Heliocentrics), and bassist Ruben Ramos Medina, along with drummer Gioele Pagliaccia from Italy.

Akamoor says, “There will be two of the most innovative, individual and exciting voices on their respective instruments; Margaux on flutes will be on my left, and Sandi on violins on my right, and this will be a wonderful combination. It is an exceptional tour with women improvisers of the highest level musically, but equally in terms of the support, love, and respect that they radiate for my leadership.”

The haunting title track from the album, according to Akamoor, was inspired by his years of working with his artistic partner Rhodessa Jones, while she was in a maximum security prison called “Naturena Women’s Correctional Institution,” near Soweto, just outside of Johannesburg, in South Africa.
“I met so many ‘fallen Angels’ who were young, beautiful, and ‘but for a flip of fate’ found themselves incarcerated for a variety of offences from shop-lifting to home invasion to being a ‘drug mule’ to murder,” he says.

“I met and fell in love with one such woman, and although she was in prison for murder, I never forgot her. The composition is dedicated to her and all of the other ‘fallen angels’ who fall from sky and walk amongst us,” says Akamoor.