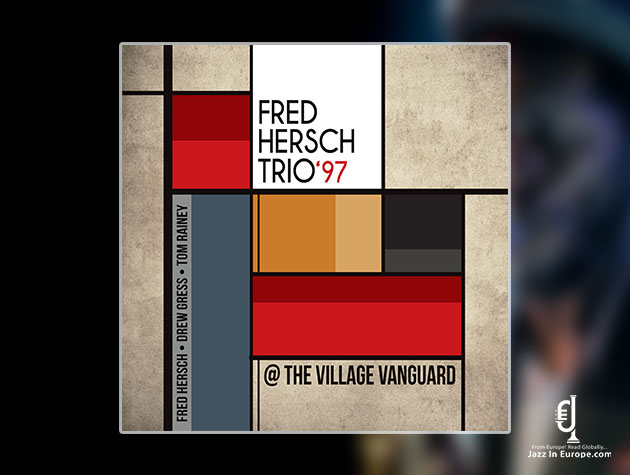 For jazz fans in 2018, it might be difficult to imagine a time when pianist/composer Fred Hersch was not intimately associated with the Village Vanguard. For more than two decades the iconic New York City nightclub has been a home base for Hersch, who performs there for packed houses three times a year and has recorded some of his most acclaimed albums on its historic stage.

But there is, of course, a first time for everything – and for Fred Hersch, that first time was in July 1997. Not his first time playing at the Vanguard, which he’d done regularly since 1979 with a host of legendary bandleaders including Joe Henderson, Art Farmer, Lee Konitz, Ron Carter, Al Foster and others. That mid-summer week in 1997 was his first of many stints at the venue as a bandleader in his own right, placing him in the hallowed company of such icons like John Coltrane, Sonny Rollins, Miles Davis, Thelonious Monk, and Charles Mingus.

Fortunately, Hersch and his trio’s three Friday night sets were captured for posterity and now, after 21 years, the pianist has hand-picked his favourite moments on Fred Hersch Trio ’97 @ The Village Vanguard, due for release on December 7, 2018, via Palmetto Records. The album’s eight tunes – a mix of Songbook standards, classic jazz compositions and original pieces – captures the Fred Hersch Trio of that time at the height of their estimable powers. Bassist Drew Gress and drummer Tom Rainey had been working with Hersch for five years at the point that they took the Vanguard stage, and those years shine through in the band’s vigorous swing, highly charged interplay, and sheer joy in discovery that they find in one another’s playing.

It had taken Hersch 18 years to graduate from sideman to leader at the Vanguard simply because he insisted on waiting until he could be joined by his own trio rather than an all-star band assembled for the occasion. “I was very stubborn about wanting to do it on my own terms with my own band,” Hersch recalls. “That’s why it took so long. I didn’t want to just go in there once and then not come back. That does happen. I insisted on throwing it down the way I wanted to.”

The wisdom of that decision is amply evident in the profound chemistry shared by the trio throughout Fred Hersch Trio ’97 @ The Village Vanguard. Listening back to the recordings all these years later, Hersch hears a band playing with remarkable confidence and abandon given the HIV-positive pianist’s personal health concerns at the time. Just over a decade later he would be placed in a medically-induced coma after a bad case of pneumonia; another ten years have passed since, affording the pianist an insightful perspective. “I was pleasantly surprised at how much authority and attention to detail everyone was playing with,” he says. “Maybe if I would have listened to it a week after the concerts I would have heard the flaws, but with this much distance I think it stacks up with any of my better trio albums.”

The album is certainly a worthy addition to Hersch’s catalogue, even at a time when his current trio (with John Hébert and Eric McPherson) is scaling unprecedented heights, as it did on this year’s highly-acclaimed Live in Europe. But just as importantly, Fred Hersch Trio ’97 @ The Village Vanguard adds another chapter to the rich history shared by a revered artist and a legendary venue.