Kamasi Washington – Euro Tour in Progress – Man with a Message! 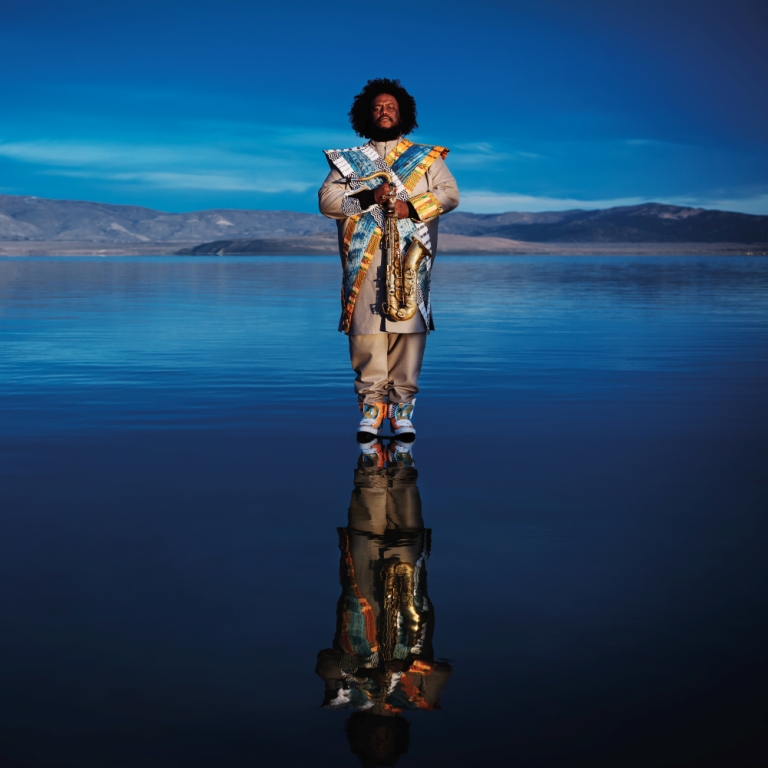 There have been instances when jazz artists have crossed over into soul or pop with a political message, and vice versa for extraordinary achievements, as singular recordings (one hit wonders and albums).

The phenomenal success of the Los Angeles rapper Kendrick Lamar after inviting guest jazz players such as Robert Glasper and Ambrose Akinmusire on “To Pimp a Butterfly” (2015) rests on such previous efforts. Kamasi Washington, a jazz tenor saxophonist also from Los Angeles -born in 1981- only plays on one track of Lamar’s “To Pimp a Butterfly”. ‘u” is the track, and it hardly highlights Washington; he is only background music, but an alto saxophone (played by Terrace Martin) is heard on most of the other tracks and Washington is seen prominently in the opening scene of the colorful rap video “For Free?” He is distinctive, standing tall with his massive afro and extravagantly colorful African gown, and with the tenor saxophone held close to his chest like a soldier at arms.

However, the spike in interest in Kamasi Washington, not only in jazz circles, but beyond is partly due to timing, meaning due to his association with Lamar, and Lamar’s sudden rise to celebrity-status. The release of Washington’s three-disc debut solo album “The Epic” (2015) on Flying Lotus’ independent label Brainfeeder received wide (to the point of almost unheard of in recent times) acclaim for a jazz recording and it is certainly deserved. But if not for his sparse contributions on Kendrick Lamar’s “To Pimp a Butterfly,” it could have gone unnoticed like so many outstanding jazz recordings annually.

Kamasi Washington’s “The Epic” is ambitious. Like The Clash’s “Sandanista” it is a dare to the jaded jazz listener. With a track titled “Magnificent 7” on disc two, Washington may have had this concept album with a political message by the Clash, in mind. For the live performances, visually, Kamasi stands like a reborn Pharaoh Sanders, Marshall Allen, or cosmic-era Coltrane, and when he blows he hits the mark set by such spiritual titans on saxophone. Aurally, Washington has put together a recording with a swarm of influences across not only decades but centuries, and not all restricted to jazz. A highlight, among so many, is “Claire de Luna,” inspired by the French composer Claude Debussy (1862-1918). It is contemporary spirit music more than standard jazz, thus it soars.

The rise of Kamasi Washington also finally helps to finally shed some light on a long overlooked jazz community rooted in the South Central Los Angeles area. Horace Tapscott, pianist and composer, formed and led his Pan Afrikan People’s Arkestra from 1961 till into the 1990s, and Washington was raised and nourished (mentored by such jazz messengers) in this area notorious for its gangster rappers.

Find out more about Kamasai Washington and his Music.