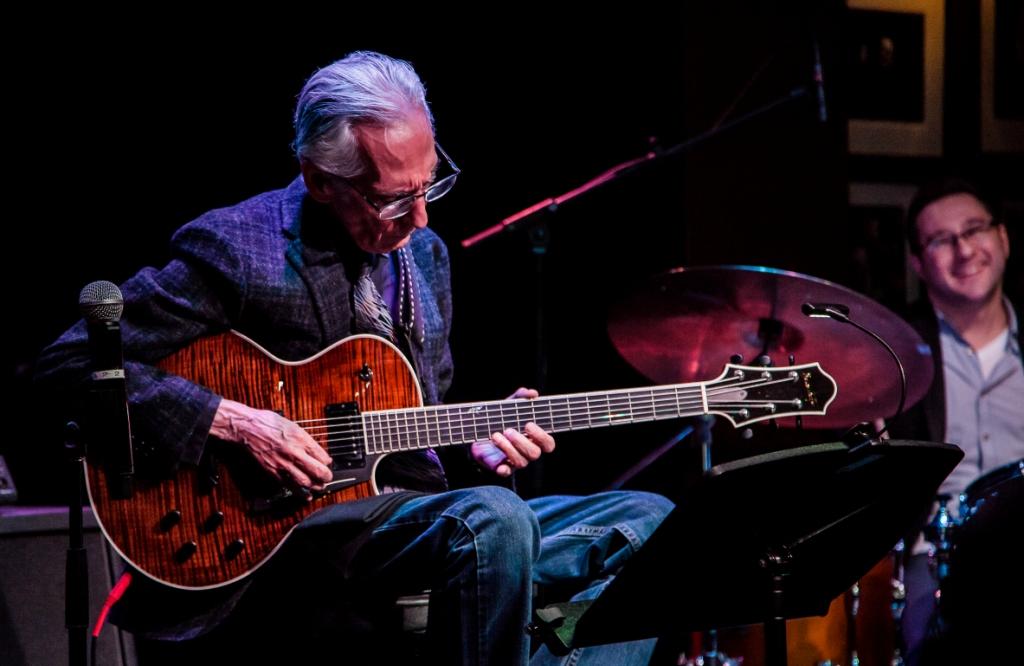 The truest gentleman of the jazz guitar.

When I attended Pat Martino’s gig a few years ago at Ronnies, I also had the pleasure to interview him.  After watching his performance last week playing with the great Pat Bianchi (Hammond organ) and Carmen Intorre Jr. (drums), the original members of the Trio, nothing has changed in my mind:  he is still the greatest jazz guitarist!

Back to the Ronnies stage and the entrance of the Trio is smooth, subdued, but as the first notes start flying around the Club, the mixed crowd attending on the 1st of the two nights, come to a sudden quiet halt.   They are all eager to hear the virtuoso of the jazz guitar.

Pat Martino seems to have made a pact with the devil because as far as I can see, he has not changed a bit since last time I saw him.

His gentle eyes and face are concentrating on his guitar, he looks up at the crowd very briefly from time to time, and then back to his guitar.  With poise, he plays, he scats with his guitar and the audience is away with him.  Some people are actually listening with eyes closed and hand under the chin, in deep concentration.

A sign of reverence and sheer delight for a jazz guitarist who never amazes to marvel.

With tracks like “Footprints” (Wayne Shorter) and “Oleo” (Sonny Rollins) to quote just a couple, Pat Martino, Pat Bianchi and Camen Intorre Jr. close a show which promised to be wondrous and went above that.  Martino’s class and hard-bop style is his trademark and have been for decades now.

Genuine talent does and can repeat itself but all for good reasons and Pat Martino is definitely one of them!