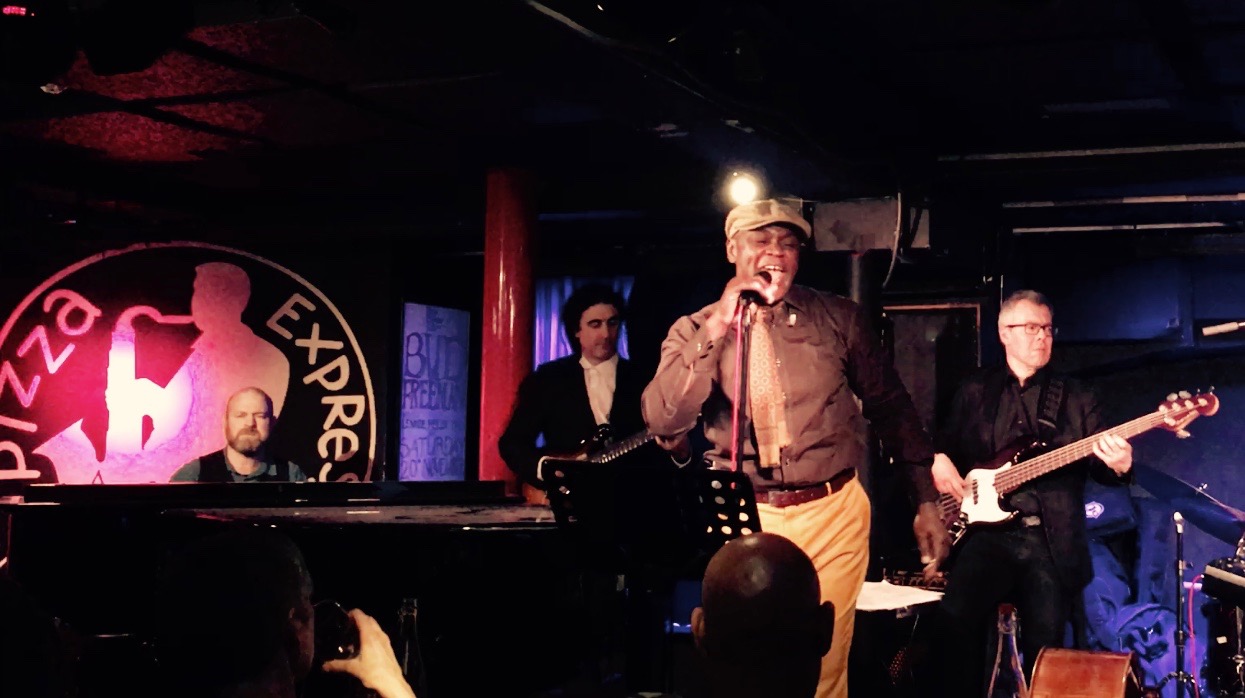 Editor’s note: Recently returning from a packed out performance at The Chichester Festival Theatre. Ola Onabule performed two sold out concerts at Pizza Express in London’s West End. Senior writer Fiona Ross was there on behalf of Jazz In Europe. Read Her Gig review with video:

I have seen Ola Onabule perform many times but this is the first time I have ‘officially’ reviewed his performance.  It was a fascinating process and I was frantically writing notes all evening having never actually analysed his performance before I didn’t want to miss anything. My notes were a collection of words and phrases which included these – physicality, emotion, the audience, his journey, moment of silence, the groove, filth, fades, family, great guitar and bass face. I shall explain.

Ola is a seasoned professional. His rapport with his audience is charming and entertaining. But what he does so beautifully, is allows the audience an insight into his journey, his purpose, what he stands for and what drives him to do what he does. His stories about his children and his training as a lawyer, may seem anecdotal, but actually show us how much his family mean to him and that they are a driving force and support behind what he does. He always opens his performance announcing his full Nigerian name: Olatunji Olubenja Omotayo Olanreqaju Adetokunbo Abdul Majeed Onabule (and yes, I did check that) but then he very quickly tells us he was born in Islington, London. To some, this may just seem like witty banter, and certainly gets a giggle from the audience, but beyond that, what it shows his audience is that Ola is a man who is very proud of his roots and his life experiences – and that it has shaped all aspects of his music.

As always, Ola performed with a stunning group of musicians. John Crawford, Guillermo Hill, Phil Mulford, Chris Nickolls and Will Fry were all superb.

There were some incredibly tasty solos from John Crawford and Guillermo Hill and Phil Mulford had one of the best bass faces I have ever seen at one point (the musicians reading this will understand my meaning here). The groove was at times mesmerizing and it was extremely hard to just sit and listen (I couldn’t) and this is in fact one of the overriding feelings at this gig – feel. Ola embodies his music with every inch of his body and the intense physicality of his performances are part of Ola’s strength. But when we are not experiencing the intense Ola groove, and it really is intense, we are captivated by his stunning vocals. His vocals are impressive and he handles them with expertise. Despite the background noise and chatter at the venue, which sadly, is always inevitable at this type of venue, there was a significant moment of silence during one of Ola’s vocal sections. The entire venue fell silent and Ola’s vocals truly soared.

Overall, the evening was wonderful and everything I expected it to be. I went expecting to be impressed by his vocals and unable to sit still because of the groove. I expected a tight and highly talented group of musicians and an evening of great music and performances. That is indeed, exactly what I got.

Find out more about Ola Onabule.