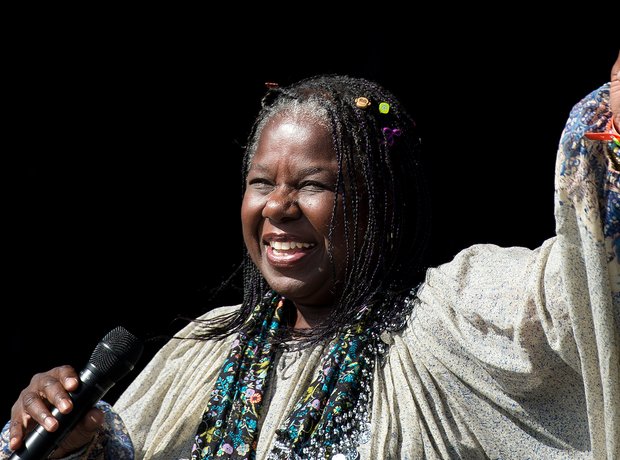 Last month we announced a number of highlights that can be expected at the 2018 Cheltenham Jazz Festival. The Festival management have now announced the full line-up and once again stars from all corners of the globe will once again descend on the Regency town of Cheltenham for the return of the Cheltenham Jazz Festival. Boasting a unique programme packed with UK debuts, one-off performances and exclusively curated concerts, this year’s festival, which runs from May 2nd to 7th, is set to deliver its trademark, broad-appealing mix of the best classic and contemporary jazz, soul, blues, and pop on offer from an array of international powerhouse acts, and the brightest emerging talent.

Other heavyweight names confirmed for the 6-day event are British jazz giant and multiple MOBO winner Courtney Pine’s celebrated collaboration with soul singer Omar, legendary funk crew Tower of Power, Roller Trio with an exclusive set premiering new material, inimitable US jazz vocalist China Moses, boundary-pushing sounds from venerable British saxophonist Evan Parker’s Trance Map+ for what will be their second ever performance, Seun Kuti, the son of the legendary Afrobeat pioneer Fela Kuti, with his late father’s band Egypt 80, and previously unheard material from Empirical.. Kansas Smitty’s House Band return to the Daffodil following their sold-out takeover last year to present their best of the programme from their East London bar. Also back by popular demand are electronic musicians Iain Chambers and Dan Nicholls with their Recomposed series, which this year will see performances from Swiss vocalist Lucia Cadotsch and Kit Downes’ fierce piano trio ENEMY, who launch their new album at the festival, reworked and artfully mixed into an entirely new piece of music at the Parabola (“an exhilarating ride” – The Guardian). A unique cross-arts project is also set for the Parabola, which brings together the dynamic Birmingham-based band Hansu-Tori with dancers from Birmingham Royal Ballet to perform excerpts from their show Wolves Are People Too, inspired by the iconic Japanese animation film Wolf Children.

Long-standing festival partner BBC Radio 2 will host live onsite broadcasts across the weekend, including a Rollin’ On The River themed Friday Night Is Music Night which will see the BBC Concert Orchestra and Guy Barker Big Band plus a host of acclaimed guest vocalists including Shaun Escoffery and Vanessa Haynes on a musical journey along the Mississippi River. There will also be live broadcasts from Clare Teal and Jo Whiley, as well as from Cerys Matthews and Gilles Peterson on BBC Radio 6Music.

As well as providing a platform for a new generation of artists, the festival offers a range of inspirational opportunities for young people: introducing jazz to preschoolers in the Yamaha Discovery Space; initiating primary-aged children in the joy of jazz; providing performance opportunities for local school jazz bands; and offering behind the scenes access and one-on-one career advice from industry professionals, which will be available for the first time this year by appointment. The winner of the inaugural LetterOne ‘RISING STARS’ Jazz Award, 19-year-old guitarist Tom Ibarra, will start his tour of the seven major jazz festivals in Europe at Cheltenham.

The 2018 Cheltenham Jazz Festival is hosted in a tented festival village in the town centre’s picturesque Montpellier Gardens, featuring the Henry Westons Big Top stage, Jazz Arena, Free Stage, Yamaha Discovery Space, a programme of family activities and events and a food, drink and market area. The Festival reaches beyond the festival village into Cheltenham bringing jazz to venues throughout the day until late into the night. These include Cheltenham Town Hall, Cheltenham Ladies’ College Parabola Arts Centre, Hotel du Vin, Malmaison and The Daffodil, as well as a dynamic free fringe line-up …around town with over 90 shows across the festival weekend.

More Information and tickets available on the festival website.