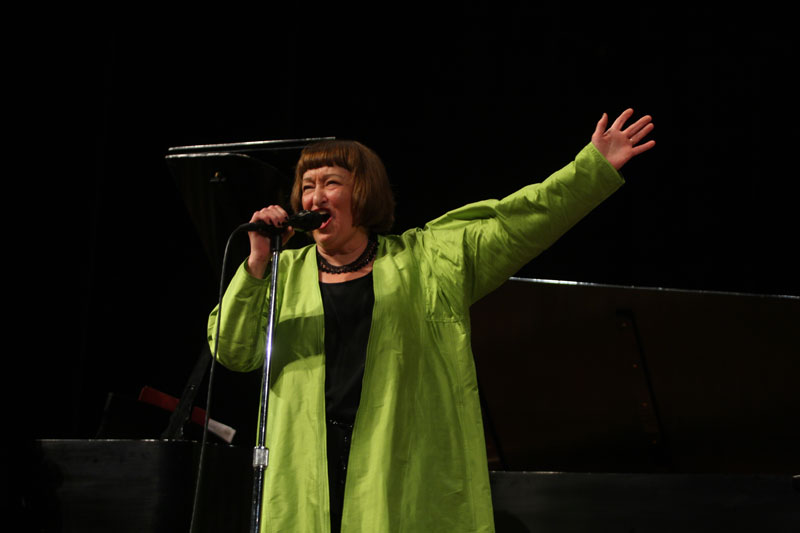 This is part 1 of Lynn René Bayley’s interview with Sheila Jordan. Last week we published her two concerts at the Sunset Sunrise club in Paris. This generated quite a reaction on social media showing just how popular Sheila Jordan is here in Europe. With this in mind, we thought it a good idea to publish this extensive 2016 interview with Sheila by Lynn René Bayley. The interview was first published on Lynn’s blog the Art Music Lounge and today we’ve published part 1. Stay tuned for Part 2 that will be published tomorrow. -Ed

If you were to ask the average music listener who is not a jazz aficionado to name the three or four best female jazz vocalists of all time, you’d probably get Billie Holiday, Sarah Vaughan, Ella Fitzgerald, Anita O’Day or possibly Diane Krall as your answers; but ask anyone who is really into the music, and one of the first names that will come up is Sheila Jordan. The almost incredible career and stamina of this amazing octogenarian continues to startle the music world as she has done since she first appeared on the scene in the 1950s.

But the reasons why Jordan is vastly under-appreciated by the public at large have as much to do with her artistic vision and individualism as with her remarkably understated way of singing. Sheila has never really sought popular acclaim at any stage in her career; she resisted recording until she was 34 years old, appearing on one startling track (You Are My Sunshine) of George Russell’s superb 1962 album, The Outer View, and even after her singing attracted raves from the critics she was stubborn about recording with only piano and bass and, later, with bass alone. She has consistently resisted pressure to sing with bands of almost any size, particularly big bands; the closest she has come to singing with a “full band,” to my knowledge, was her 75th birthday concert with trumpeter Paolo Fredu and Serge Forté’s piano trio, and three tracks on a 2005 studio session with German singer Sabine Kühlich on which the piano trio was enhanced by tenor saxist Hubert Winter. Because of her strict rules about who and where she will sing, Jordan has become a living legend among musicians but scarcely a popular favorite.

I’m almost embarrassed to admit that the first time I heard, or heard of, Sheila Jordan was in the mid-1970s, watching a PBS documentary about jazz singers. Suddenly, in the midst of the show, a diminutive, dark-haired woman sporting a bob hairdo with a flower in it appeared at a microphone, singing in a way I’d never heard before. The voice was so soft that at times it was almost a whisper, but my God, what style! She could scat like Ella, sing vocalese like O’Day, or just sing the lyrics and the tune “straight” while still swinging and bending notes like a jazz horn. She was probably close to 50 years old at the time, but her voice had an amazingly youthful, girlish sweetness which she has retained to this day, and the overall impression was of a real musician singing jazz. What I mean by that is that Sheila Jordan, unlike anyone else I’ve ever heard, sounds like she also plays an instrument (like, say, Dena DeRose or Chloe Feoranzo) but she doesn’t. She was just able to absorb everything she heard from her youthful idols, particularly alto saxist Charlie Parker, and transform it in her mind into jazz singing.

Lynn René Bayley: I’m going to try to ask questions that you haven’t been asked a million times before, but I’m sure I’ll slip up a little. To begin with, you often talk about how you were impressed by Charlie Parker at age 17. Did you first hear him in your native Detroit?And before you heard him, who were the jazz musicians you liked the most?

Sheila Jordan: I heard Bird on a jukebox when I was in high school and was hooked on his music from that point on. I was aware of Count Basie and Duke Ellington, but wasn’t thrown a huge jazz loop until I heard Bird. I didn’t hear or don’t remember hearing anyone that impressed me as deeply as Bird.

LB: When I listen to you sing, I surely do hear echoes of Bird, but I also hear a deep harmonic sense based on piano chords. Were there any specific pianists whose work you studied and learned from?

SJ: I studied with the great Lennie Tristano for a couple of years but not piano, just improvisation which I was already doing but he freed me up a lot. Singing with him was a big challenge at my lessons. It made me listen real closely to the chords.

LB: After Bird’s death, did you ever sing with, or consider singing with, Sonny Stitt or Phil Woods? Their styles were so close to Parker’s, I would think you would feel right at home with them.

SJ: I didn’t really sing with Bird. I just would sit in and do a tune or two when he asked me to. I never worked a gig with him. …. the only horn player I ever had the pleasure of working with was Roswell Rudd, a wonderful trombone player. We even recorded something quite a few years back.

LB: I’ve heard you say in an interview that women who went to jazz clubs, particularly white women, were reviled and “called all sorts of names” back then, but surely men who went to see jazz played live, even white men, brought dates with them. Were they all treated that badly, or only those women who tried to perform jazz?

SJ: Not women who were with dates or white men. I got name called by white guys because I was hanging out with black musicians trying to learn the music and I sang with two great scat singers who helped me with my scatting. We had a group together in Detroit in the early ’50’s. I learned a lot from these two gentlemen. They were my friends and like brothers. White guys always thought if they saw a white woman with a black man it had to be a sex thing which was not the case at all most times.

LB: Did you know Nica (Baroness Pannonica von Königswarter) at all? I’ve always felt that she probably suffered the most from discrimination because she was European royalty and not just a regular working class American woman. When I read her biography I was deeply saddened by the ending; her family has confiscated all the hundreds of hours of jam sessions she recorded in her apartment and won’t let them be released. They’d just as soon that the world simply forget about her.

SJ: No, I didn’t really know her. She mostly hung with the male musicians. I remember one time after a concert that my late husband Duke Jordan was playing at she made the statement in front of me and Duke…. “Come by the pad Duke because I’m having a party for the musicians after you take your ole lady home.” Needless to say Duke did not attend that party.

LB: Speaking of pianists, I’ve always wondered if you enjoyed, from a professional standpoint, working with your first husband Duke Jordan. I’ve always liked his playing myself.

SJ: I didn’t work with Duke really. Only when Bird would ask me to sing a tune or two with his group. Duke happened to be the piano player but we didn’t work together nor do any music together so to speak.

LB: To refer back to your email about Bill Evans, I’m just wondering if you ever had the chance to work with him?

SJ: No, but I did sit in with him one time at Trudy Heller’s in the Village. He was playing at her club which I think was named after her and I came in to hear him and he invited me to sit in and do a tune or two.