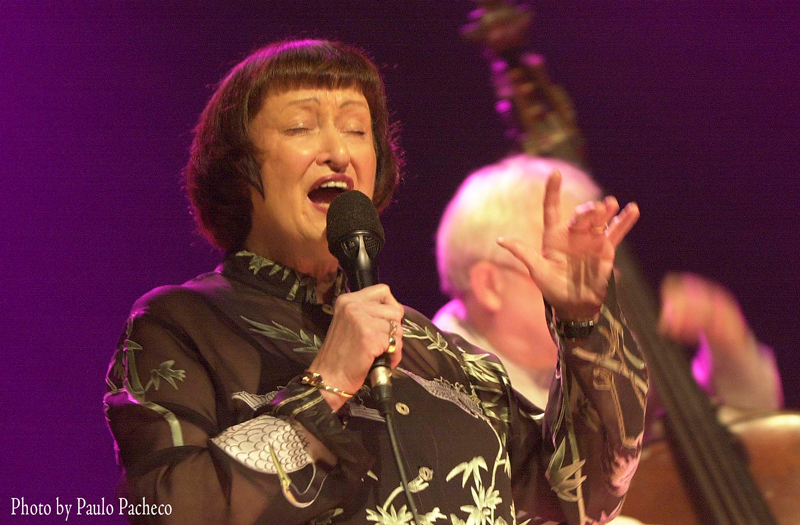 Yesterday we published Part 1 of Lynn René Bayley’s extensive interview with Sheila Jordan. n part one Sheila spoke about her early days, Charlie Parker and the position of women who went to jazz clubs, particularly white women. In part two Sheila speaks about navigating her way through the music industry as a single mother and her influences throughout her long and esteemed career. Enjoy

LB: When you first became famous in the jazz world and were pressured to record with jazz orchestras, how did you manage to resist that and still have a career? Were you your own manager at the time, or did you have a manager who agreed with your insistence on working only with bass or bass and drums, or what?

SJ: I was never pressured to record or work with any jazz orchestra. I kept a day job ‘til I was 58 working in an office but sang in a little club in the Village called the Page 3 a couple of nites a week. I also took vacation days to travel and do music sometimes too. I always found a place or way to sing even though I had to keep a day job. I didn’t or don’t do the music to become famous. I do the music to keep it alive and teach it to the younger generation. I don’t have a manager or agent so to speak. Most of my gigs I get thru jazz musicians or word of mouth.

LB: I have to admit that I am curious as to how you managed your career considering that your appeal has always been primarily to musicians, critics and hard-core fans. Have you had lean years, or lean periods, professionally speaking? And, if so, how did you weather those periods?

SJ: As I stated above, I had a little kid to support and I supported her by myself therefore I always kept a day job but found places to release my musical urge. I don’t think of what I do or did as a career. I think of it as a calling and my calling is to keep it alive thru performances and teaching it to the younger generation.

LB: One of the most interesting features of you singing, to me, has always been that unusual combination of soft intimacy and joyous swinging. It’s a very rare quality that I can’t remember hearing in most other singers… in fact, the only predecessor you seem to have had in terms of a light, sweet voice and a quiet delivery was an obscure singer who mysteriously disappeared without a trace in 1956, Marcy Lutes, though Lutes didn’t improvise like you. Were there any singers who influenced you at all, either in terms of the lightness of delivery or style?

SJ: Only Lady Day. I was more of an instrumentalist freak. That’s who I listened to growing up. I always sang tho even as a little kid.

LB: What did you think of Jackie Cain? I always loved her boppish scat performances.

SJ: I loved her singing, especially what she and Roy Krall did together. I don’t remember ever hearing her actually scat but their arrangements and harmonies were incredible! It was a great duo.

LB: One of my all-time favorite of your recordings is the album you made with Mark Murphy, One For Junior. He’s another singer, I have to admit, who I discovered somewhat late in his career…another singer who appealed primarily to musicians and flew under the public’s radar. Were there any other singers you’ve performed with who you feel were on that high of a level?

SJ: Mark was very special and it was a joy to record with him. It was Joe Fields from High Note records who approached us to record together. Mark was a very very close friend of mine and we spent many years having a close friendship. We did a couple of Jazz Operas for George Gruntz and I think that started us thinking of the possibility of recording something together. It was good timing on Joe Field’s part.

LB: And now I simply must ask you the million-dollar question: how on earth have you managed to preserve your sweet vocal quality for so many decades? That’s one of those things that generally goes with age, regardless of how much you keep yourself in good condition, but I keep listening to you and the basic timbre of your voice has darkened only slightly since the 1970s!

SJ: Thank you so much my dear for such a lovely compliment! I don’t think about it and I don’t strain or misuse my voice. I do however do a twice a day steaming with my steamer and I now do exercises which I got from a wonderful speech therapist. I also have an incredible throat doctor who I see twice a year just to check on the vocal chords. It’s strange because I really don’t do anything special or eat special foods. Maybe it’s my Native American background ha ha … My three generation was royalty. She was Queen Aliquippa of the Seneca Nation….

LB: This may seem like a silly question, but do you feel that you’ve accomplished everything you wanted to in your career? Or, even now, is there anything you’d like to do that you haven’t already done?

SJ: It’s not a silly question at all. I am always striving to learn more music. I love my string quartet project and would love to be able to do that more. I don’t feel I will ever accomplish all I want to. I would love to be able to have more time to compose. I have millions of melodies in my head but they disappear quickly if I don’t record them which I rarely do, therefore they’re lost.

LB: Who are your own favorite jazz singers? I’m not sure anyone’s ever asked you that before!

SJ: I don’t remember if anyone ever asked me that question. I would say the singer for me was Billie Holiday. Her emotion and phrasing. She didn’t have an outstanding voice like Sarah but it’s what she did with it. I think Ella Fitzgerald is the greatest scat singer who ever lived. This is of course my opinion.

LB: To wrap things up, is there anything you’d like to share with my readers about jazz singing, the state of modern jazz today (lots of rock beats, ambient jazz and hip-hop) or any other musical matters?

SJ: No, not really. Just don’t give up the music. Keep it alive and if you play it or sing it. Keep doing it. Dedication always pays off in some form and I found that out ….

LB: Thank you so much for your time! I’m sure my readers will love this!