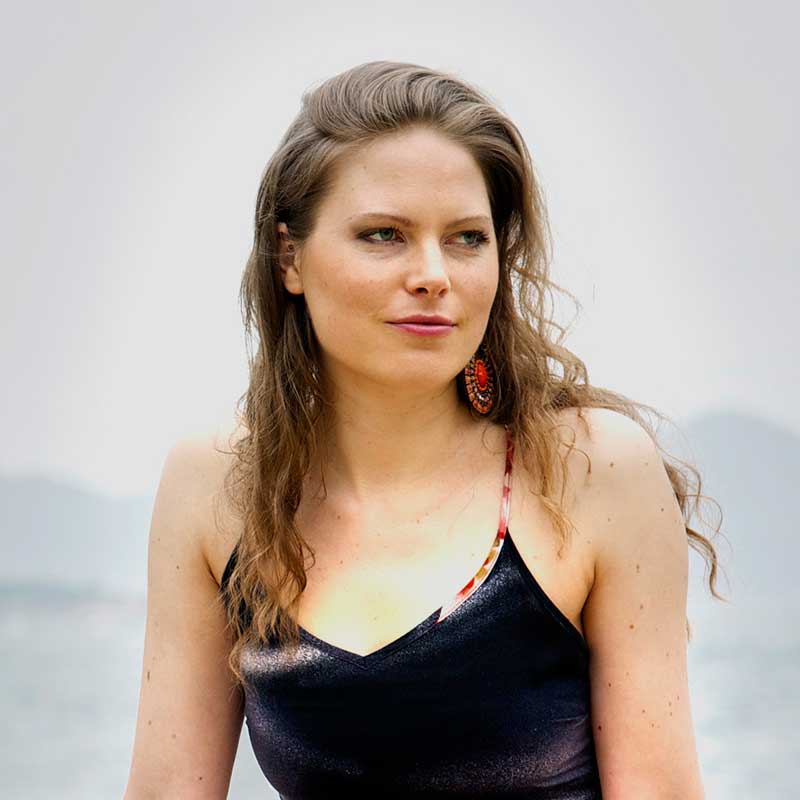 Dutch born, Brazilian based vocalist Martie Rikhof recently released her debut CD “Quem Te Viu”. The CD recently appeared on my desk and being a self proclaimed musical snob when it comes to Brazilian music my first thought was – Well here we go, another CD packed full of westernized bossa nova’s. This preconception could not have been further from the truth and while you can hear some European influences the language of this CD is without doubt Brazilian.

I felt I need to know more: How does a girl from Tilburg in the Netherlands end up in Brazil? How did the collaboration with Claudio Dauelsberg come about? How does she experience the differences in culture?. Recently I had the opportunity to catch up with Martie and Claudio to pose these questions and more.

JIE: You were born in the Netherlands, Studied at the conservatory in Rotterdam. Now you are living in Rio and part of the Brazilian MPB scene. How did all this come about?

Martie: My first contact with Brazilian music was while studying jazz at the Codarts Conservatory in Rotterdam. After completing my bachelors degree I decided to delve deeper into this. I travelled to Brazil for a holiday going to Fortaleza (north east Brazil) where suddenly it all happened. I didn’t take myself too seriously when it came to Brazilian music due to the fact I didn’t do the ‘official course’ (World Music – ed) at Codarts, but my passion for the music and language was huge. To make a long story short, during this holiday I ended up doing interviews and tv-programs and was invited to record a 1,5 hour TV special about my work.

Five months later I performed on a jazz festival near Fortaleza where I met Claudio Dauelsberg. He invited me to come to Rio and help me with my career.

JIE: When you arrived in Brazil did you find there was a large culture difference between the way we view Brazilian music here in Europe and how it’s viewed in Brazil?

Martie: Yes, in Europe Brazilian music is mostly ‘bossa nova’ and the high quality music from the 60s from people like João Bosco that has a very close relation to jazz. Brazil has 200 million inhabitants and a lot of them don’t live in sophisticated cities like São Paulo and Rio. These people mainly listen to ‘Certanejo’ (Brazilian country music), Forro, Brega (like ‘ai eu te lego’ (text about ‘I’ll fuck you’) and Brazilian funk. To my surprise there also is a serious interest in jazz among ‘higher educated people’. In my estimation the Brazilian music you hear in Europe and what I do, covers no more than approximately 15 percent of the music market in Brazil today.

3. Did you find it difficult as a foreigner to be accepted in the Brazilian scene? What are the greatest challengers for international musicians in Brazil?

Martie: First of all, Brazil is almost the size of a continent. In Fortaleza things are really different from Rio. All ambitious musicians go to Rio or São Paulo to start a career. Brazilians are very spontaneous and open. They consider you a friend immediately, but soon you discover that this is all rather superficial. To get real friendships and respect as a musician is not easy. Beyond any other qualification that you have or present or want to be judged by, people see you as a ‘gringa’ (foreigner). It takes a long time and hard work to gain the respect you want as an artist. This is partly due to the language barrier (very few Brazilians speak another language other than Portuguese), most people in this country really are/stay apart from the rest of the world. Even though American pop music is popular, most of the time they haven’t a clue what the song is about. Doing business here is a real challenge, social rules and the mentality are very different and there is a lot of bureaucracy.

4. Your debut album “Quem te Viu” was produced by one of Brazil’s top producers Claudio Dauelsberg and features an array of top Brazilian musicians. How did this collaboration come about?

Martie: I met Claudio while I was doing the TV special in Fortaleza in North East Brazil, on a jazz & blues festival where we both performed. At that time I was looking for someone who would be willing to help me develop my skills in Brazilian music and making arrangements. I was searching for my own sound that would combine my roots with my passion for Brazilian music.

Claudio acknowledged my talent and he invested a lot of time in me. Thanks to him, I learned that you have to understand certain details about timing to gain the respect of the top Brazilian musicians. He encouraged me to take percussion lessons. It was a great gift for me to work with those guys and they all respect me a lot, which which I consider to be the greatest honor you can achieve as a foreigner.

Other challenges are discrimination and social differences. For example, I have a passion and deep respect for the African culture, but sometimes it seems Coloured people in Rio find it hard to like me. It’s as if they see me as that European girl that has had all the opportunity’s that they haven’t had.

5. In the CD information I received the repertoire is described as MPB, for those readers not that familiar with Brazilian music could you explain what this is?

Martie: Musica Popular Brasileira. Even Brazilians don’t agree what that is exactly. To the letter it means ‘Brazilian popular music’: all the popular music in Brazilian-Portuguese. This can be any style: samba, as well as bossa nova and pop. They use to call it ‘MPB’ when it is ‘quality pop music’.

6. Working with Claudio, a graduate of the Berkley Collage of Music in Boston and with your European background do you feel that the music on the album was influenced by international styles?

Martie: Claudio, son of a German father and Brazilian mother, is one of the few Brazilian musicians that really understands European culture and what is going on musically; he speaks English and at the same time is 100% Brazilian. A lot of musicians from Europe come to him to learn about Brazilian music. I was very lucky to have him as my coach.

Thanks to him I learned about the details that are important to be accepted here in Brazil. Brazilians are not easy in accepting. They can be very enthusiastic about the fact that you make Brazilian music, but they don’t take you seriously that quickly.

On this album we created a blend of European and Afro-Brazilian atmospheres. With Claudio I share affinity and search for sound transparency that you hear in the European jazz. These more sophisticated sounds do not exist in Brazil. At the same time you can’t find the real swing of Brazilian rhythm in Europe. We tried to bring this together on the album. There are some hybrid things on the cd. My roots lie in jazz, I can’t deny or hide them. For example, when I interpret songs, I try to incorporate and mix them with my roots. I’m improvising/scatting, that is already something Brazilian vocalists don’t (or can’t) do. In Brazil I discovered how influenced by jazz I actually am, but at the same time I really feel I have become Brazilian.

Adding to this, I asked Claudio, In producing this album, what were your greatest challenges?

Claudio: We needed to understand where the line or broader is between the two cultures. There was a lot to overcome in this process, we needed to discover a great deal in the pursuit of building a musical identity. We tested many Brazilian songs, went through the adaptation process to find the best repertoire and in the end, creating an aesthetic in the dialogue between style and the essence of Martie.

7. Jobim once stated “What really swings is the music of the United States, Cuba, the Caribbean and vicinity, and, of course, Brazil. The rest is all waltzes”. How important is dance in Brazilian music?

Martie: Oh very important !!! Here they call it ‘gingado’, a swing and movement from the body that is almost impossible to learn if you were not born and raised in this culture.

I did a lot of dance classes, not only because this is important for stage performances in Brazil, but also because I personally felt a deep urge to do this. I needed to get out of my European head. Relaxing and coordinating my body also improved my technical vocal skills.

Claudio: Dance has always influenced music. The Brazilian rhythmic manifestations are very different between the north and south of Brazil. Martie has been able to penetrate with resourcefulness the rhythmic traditions and swing of the Northeast of Brazil, creating ‘specials’ in the arrangements of the songs that included these elements.

8. Your album has been released worldwide, do you have plan’s to tour this outside of Brazil?

Martie: Yes, of course I do! We are currently investigating the possibilities for touring outside of Brazil. I intend to come to Europe and the US soon and maybe also Japan. We carefully made repertoire choices and I think the album is suitable for these markets.

9. What advice would you give to European musicians wanting to learn more about Brazilian music?

Martie: Come to Brazil ! Haha. Being in the middle of this lovely big mess called Brazil won’t always be easy, but it will be an unforgettable experience that makes it possible to feel maybe for 1 second the real Brazilian vibe and energy in the music. There are excellent musicians in Europe that play Brazilians music but the very specific energy that you have here, doesn’t exist anywhere else. In Europe you can learn Brazilian music here (pointing to her head – Ed), but the real thing (pointing to her gut) you can only learn here in Brazil.

Claudio Duelsberg added to this point:

Claudio: The (same) process that Martie experienced. She came, worked intensively with musicians, interacted in daily life with the carioca culture (ate the local food, danced the local dances, met and lived the experience of our Brazilian traditions). This requires time, research, curiosity and a hunger for knowledge.

I think this is the way, be open, analogous to the process of learning a new language.

Quem Te Viu is now available at iTunes and Amazon. A full review of this album will be published shortly on this site.