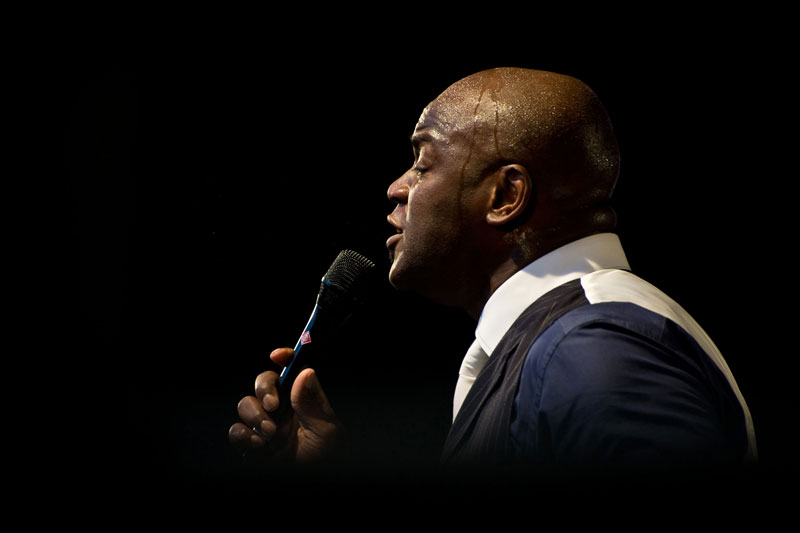 In the hottest July ever in Italy, in a beautiful Villa in Casalgrande, Reggio Emilia, where each year a three day jazz festival (The Mundus Festival) is hosted, I found my chance to see for the first time an artist, a performer, a song-writer, a man and his music, Ola Onabule.

The show started by looking to the future with a number of tracks from Ola’s forthcoming album. Jankoriko was a perfect start, Love Again is a gem that will surely become an instant classic once the new album titled ‘It’s The Peace That Deafens‘ hits the shelves in September and ‘Invincible’ was the third song of the set performed before a selection songs spanning the whole story so far (more than seven albums). Ater three previously unheard songs, the audience was under the spell, not a usual feeling at a show, not at all.

Noticably, there is no difference in pathos between the songs performed but composed many years ago and those written more recently in 2014. Suggesting that there is a strong artistic cohesion and credibility in Ola Onabule’s body of work. Four songs into the show you realise that you cannot prepare for what will happen next as Ola Onabule introduces different flavors and colors to the songs – the only thing that the audience can do is live that moment in complete abandon, guided by the voice and the band. Once the show was over, an hour and a half after Ola’s “Good Evening”, you just beg for more, as you know, deep in your heart that the best is maybe yet to come! 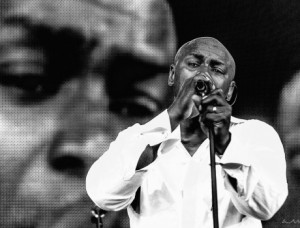 A skilled entertainer and a serious technical vocalist, right down to the lyrics written with poetry in mind and pen, Ola engages people, enchanting the audience with the long improvisation during ‘How’ one of the first songs Ola composed and positioned beautifully in the middle of the setlist. Ola masters the stage and drives the band up and down a rollercoaster of emotions that remain with us several days after the last note of ‘Soul Town’ (A cry for the Spirit that inspired Soul Music and not for Soul Music itself), the encore, dropped on Casalgrande (a sing-a-long included).

This performance explained to all of Mr Onabule’s fans why they are so fond of his art, why they have those entangled feelings every time they listen to any of Ola’s albums and why there is such a deep connection with his music.

This show also revealed to all those who didn’t know Ola that we all have been blessed and privileged to witness such a magical night. A Spellbinding show, an amazing work of art, a man who is able to touch your heart and drive you to the place where you belong.

Basically, it is all here. Yes, it was just a night at a jazz festival, it was just another gig on the tour, it was just a hot summer night in Italy. But it was also something that we will never forget. Until the next time Mr Onabule will offer to share his music and poetry with us again. Can’t wait.

More infromation about Ola Onabule can be found at: www.olasmusic.com