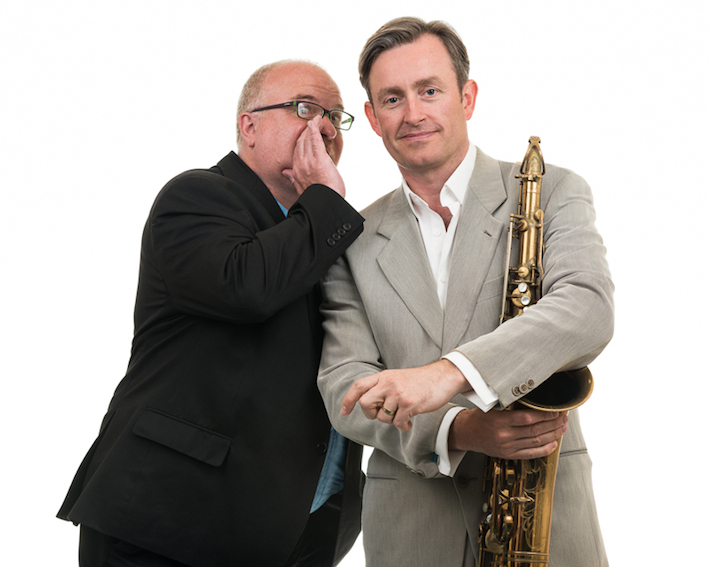 Leading Scottish duo Tommy Smith & Brian Kellock play a series of dates in England and Scotland during June and July.

Saxophonist Smith and pianist Kellock have worked together extensively over a long period, having known each other since the 1980s when they emerged on the Scottish jazz scene as young musicians.

As well as recording three duo albums on Smith’s Spartacus label, the most recent being last year’s The Whispering of the Stars, and touring together on both sides of the Atlantic, Smith and Kellock have together been central to several of the Scottish National Jazz Orchestra’s most successful projects, including the orchestra’s recent tour with singer Kurt Elling.

On discovering by chance that Kellock had performed George Gershwin’s Rhapsody in Blue as a music student in Edinburgh, Smith re-orchestrated the work specifically for his duo partner as featured soloist. The resultant album, Rhapsody in Blue Live, recorded at Edinburgh Jazz Festival in 2006, helped to extend both the Scottish National Jazz Orchestra and Kellock’s international reputation. The orchestra’s Ellington celebration, In the Spirit of Duke, on which Kellock took the ducal role under Smith’s musical direction, followed in 2013 and received similarly widespread acclaim.

In concert, with Smith matching Kellock’s encyclopaedic repertoire of standards, they can go spontaneously to almost anywhere in the jazz canon the mood takes them and their relaxed, natural onstage rapport adds to the entertainment.