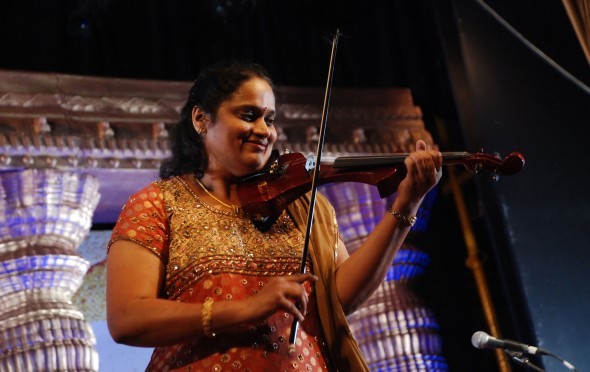 When Jyotsna Srikanth heard a violin being played for the first time, at a concert in Bangalore at the age of five, she was so taken by the instrument that when she got home she ran to the kitchen cupboard, dragged out two brooms and started scraping them together to try and recreate the sound she’d just heard.

“My mother thought I’d gone mad,” says the now London-based violinist who is currently touring the UK with her Indo-jazz group Bangalore Dreams. “But I was desperate to hear that sound again.”

Srikanth’s mother, a respected singer in Indian music circles, had already begun training her to follow in her footsteps with six hours of daily practice. So it took a lot of pleading from Srikanth to persuade her mother to buy her a violin.

Even then, Srikanth’s mother used her motherly wiles to ensure that practice schedules were maintained. There was a bakery next door and by four in the afternoon the aromas of fresh baking would waft into their house.

“I’d get promised a bun or something else tempting if I worked on the exercises I’d been given,” says Srikanth. “And the bribery worked!”

She made her concert debut at the age of nine and then in her mid-teens she started her training in Western techniques at Bangalore School of Music, going on to gain her grades from the Royal School of Music in London before studying to become a pathologist. Along the way she fell under the spell of jazz violinists Stephane Grappelli, Jean-Luc Ponty and Didier Lockwood, finding their approaches chimed with her own free-flowing improvisational style.

“Playing music for a living is a precarious lifestyle and I was unsure about turning fully professional until my husband got the chance of a job in London in 2004.”

Combining pathology with music didn’t hinder her playing ability, however, and she worked on some 200 film soundtracks as well as playing concerts, eventually establishing a reputation that has now seen her regarded as the leading Indian violinist in Europe.

In Bangalore Dreams, in which she is joined by Shadrach Solomon on keyboards and NS Manjunath on drums and Indian percussion, Srikanth fuses her native Carnatic tradition with western ideas and jazz harmonies while staying true to her essentially vocal-based style of playing.

“Carnatic music isn’t like western classical music where you have pieces written specifically for instruments like clarinet concertos or piano sonatas,” she says. “The instruments are meant to do what the voice does, which means that if someone pays me a compliment by saying that I make the violin sing, it’s very nice but really I just know that I’m doing my job properly.”