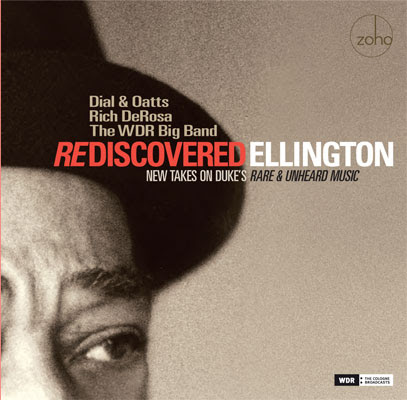 In the liner notes to the album the three main artists (Garry Dial, Dick Oatts, and Rich DeRosa) stated that the goal of this recording was: “To continue Ellington’s legacy, we resurrected these compositions with our perspective through personalized arrangements. Although a few of them suggest a “tip of the hat” to Duke’s sound, most of these renditions showcase how quality music may be transformed into something new and refreshing while respecting the original essence of its composer.”

Stephen James, Ellington’s Nephew, in his dedication provided some background information about initial genesis of the project “In 1979, my mother, Ruth Ellington, and I wanted to record and archive all of the Tempo Music catalogue. This included compositions by my uncle, Duke Ellington, and many of his musical associates. We hired Garry Dial to do this job.”

Garry Dial then went further giving his perspective and explains “how a poodle named Bravo inadvertently became responsible for this collection of rarely heard gems by the great Duke Ellington.”

“In the late 1970’s I had the honor of working with Duke Ellington’s sister Ruth and her son Stephen James. They hired me to record in alphabetical order the entire Tempo Music catalogue of Duke’s music and his associates for their family archive. Entering Ruth’s apartment was quite an experience. There stood Duke’s famous white piano with his original painting of Satin Doll hanging on the wall. I was speechless and somewhat daunted. Ruth and Stephen were most gracious and warm to me, putting me at ease.

They described the job and when I saw how incredibly prolific Duke had been, I said, “You probably need ten pianists to complete this project!” I suggested Hank Jones, Tommy Flanagan, Kenny Barron and Dick Hyman among others. “Do you want this job or not?” said Ruth. I gulped and said, “Yessssssss!”

I went to Ruth’s apartment for about three months, five days a week. The music was in various forms: a sketch, a score, and even a published lead sheet. I was a kid in a candy store. As I played through the tunes, Stephen and his brother Michael would stop over and give me the eye if I wasn’t getting the feel right. A wink meant I nailed it. In this way their wisdom guided me.

When it was time to record, the little poodle Bravo began singing along. It became evident he was not to be silenced. Therefore I suggested to Ruth that I should copy the pages, take them to my apartment and record them there without the barking. That’s why 38 years later I am in the unique position of having these scores of Duke’s music in my filing cabinets.

Rich DeRosa, Dick Oatts and I have collaborated on many projects together over the years. In 2015, Rich was chief conductor and arranger for the WDR Big Band. He contacted me about doing a Dial & Oatts project with the band. I thought of the trove of Duke Ellington treasures I had on file. Why not resurrect these rare, obscure tunes and present them for a new audience as well as diehard Ellington fans?

We selected nine tunes and got to work arranging them in our own style for the big band. We traveled to Cologne, Germany, where we performed the arrangements with the band at the Philharmonic halls in Cologne and Essen. During the day we recorded this CD in the studio. What a thrill to play our versions of Duke’s tunes with these great musicians!

It’s always an honor to work with my musical brothers, Dick Oatts and Rich DeRosa. Both Dick and Richie’s fathers were great musicians in the era of Ellington. Oatts’ dad, Jack, played alto in the style of Johnny Hodges. Richie’s dad, Clem, was a drummer and arranger who led many famous bands including the Glen Miller Big Band. These dads would be so proud of their sons and this project!

A few months after we made the recording, I ran into Duke’s granddaughter Mercedes at an event. I told her about our “Rediscovered Ellington” project and she gave us her blessing.

I called Stephen, now president of Tempo Music, to tell him about the work. It was like old home week. We reminisced about the days I came to the apartment to help archive Duke’s music.”

The liner notes for the album are written by Kabir Sehgal who himself has had a rather amazing career. Sehgal is a jazz bassist, a New York Times and Wall Street Journal bestselling author and record producer. The latter has earned him two Grammy Awards and a Latin Grammy Award. He has also had a long and distinguished career as a navy officer, military veteran, investment banker, and financial executive. A section of Kabir’s liner notes are reproduced below, The complete notes are available on the Zoho Records website:

Rediscovered Ellington is a rarity that comes along once every few decades, a trove of mostly unheard music by a music legend fashioned into a glimmering yet meditative production. The great Duke Ellington, for whom this album is a tribute, once observed that “there are two kinds of music”, the kind that connects to the audience with sincerity and the kind that doesn’t. Judging by the response of listeners worldwide, Ellington’s music is of the first kind: beautiful, cultivated, resonant, and timeless.

But for there to be any audience connection at all, the music must first be heard. And that’s what is special about this stunner. Maestros in their own right, Garry Dial, Dick Oatts, and Rich DeRosa, unearthed these compositions from obscurity. They turned musical amnesia into memorable and vivid works that bring Ellington’s life and music into sharper focus not only for the seasoned Ellington diaspora but those new to his sizable repertoire. Dial, Oatts, and DeRosa shaped these compositions with colorful and immaculate arrangements, rendering Ellington afresh and anew.

Prior to this recording, few of these works had a brief public life. Most were unknown to the general public. While a few of the arrangements suggest an homage to Ellington’s sound, most of the works showcase how music may be given new and refreshing life while respecting the composer’s essence.

Rediscovered Ellington is a through-and-through treasure, and music lovers should reserve their deepest gratitude for Dial, Oatts, DeRosa, and the WDR Big Band who have given the world the album of the year whose musical genesis spans many decades.