Fay Claassen and David Linx joined forces with the WDR Big Band for a concert full of twists and turns on Friday, September 10. As two of Europe’s most celebrated vocalists, they combined to interlink ideas, merge moods and stir styles together on a night of renewal and reawakening.

The performance at the Philharmonie in Cologne, Germany, marked the launch of a new album called And Still We Sing. It reunites Claassen and Linx for their first collaborative recording since 2004, and is Claassen’s third production with the WDR Big Band. A strong flavor of familiarity and friendship ran through everything the band and singers served up, infused with a zesty spirit of exploration.

Room to roam is in plentiful supply at this venue. The Philharmonie can hold 2,000 concertgoers and was designed to resemble an amphitheater. While its dramatic banks of plush red seats were only half full because of physical distancing rules, the musicians conspired to create an intimate atmosphere. “Music has a big power to connect people and bring us all together,” Claassen said prior to the concert. Linx quickly added: “Even if we have to stand two or three meters apart.” 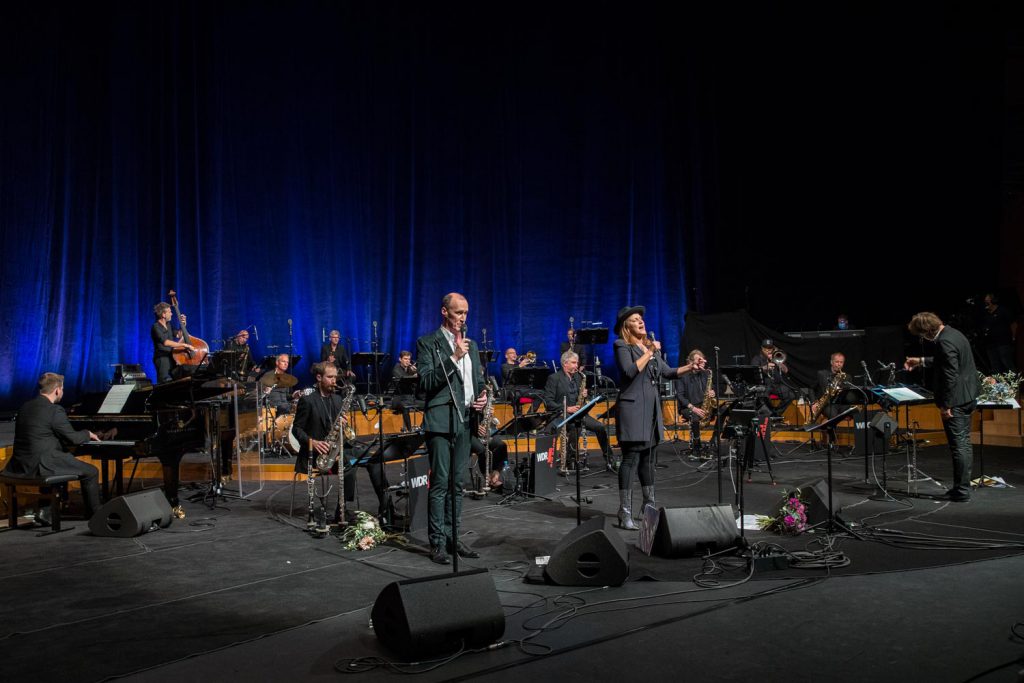 Several songs showcased the vocalists’ tendency to finish each other’s sentences. The first three tunes featured both singers, overlapping Claassen’s soulful power with Linx’s plaintive breathiness. Linx watched the next song from the sidelines, and Fay Claassen responded with a performance that might have knocked a lesser man off his bar stool. Swinging off its hinges and bluesy enough to turn purple, “Good Times” could have been written for Claassen. In fact, it was. The song’s composer, tenor sax player Paul Heller, added a squirming solo that seemed intent on shredding the sheets of paper on his music stand. Before him, Karolina Strassmayer laid down the law with a punchy outburst on alto sax.

For “Tackle and Dabble”, David Linx returned to flex his scatting muscles. The singers then swapped places again for Michael Abene’s arrangement of “In a Sentimental Mood”, with its dreamy tempo and cooing clarinets giving space for every note to simmer and soar. Both vocalists came together for “Feel the Beat”, Claassen’s first composition to feature on an LP. This wink-wink number featured trombones trading solos and a simultaneous scatting interlude, with Linx’s percussive bullets piercing the silky stream from his co-star. By now, the band was heating up, cajoled by Hans Dekker’s exquisite drumming.

The French-language ballad “J’me Prépare” had the crowd sighing into facemasks and steaming up their glasses. “Sum It Up” then rounded off the set with a synchronized vocal that is breathtaking on the album and was mind-blowing in real life. The audience responded like people who had waited almost two years to applaud, and was rewarded with “Rebirth”, an encore that melted the two voices together, teased them apart, and repeated the process with growing force until the room started to spin.

It was an adventurous concert that embraced ambiguity. Much of this reflects the band’s talented conductor, Magnus Lindgren, who contributed several arrangements and a couple of flying flute solos too. “Our craft is about opening up meanings and experience,” Linx said. Claassen interrupted: “The compositions are so rich and Magnus brings out all of the levels of depth, seriousness and lightness.” 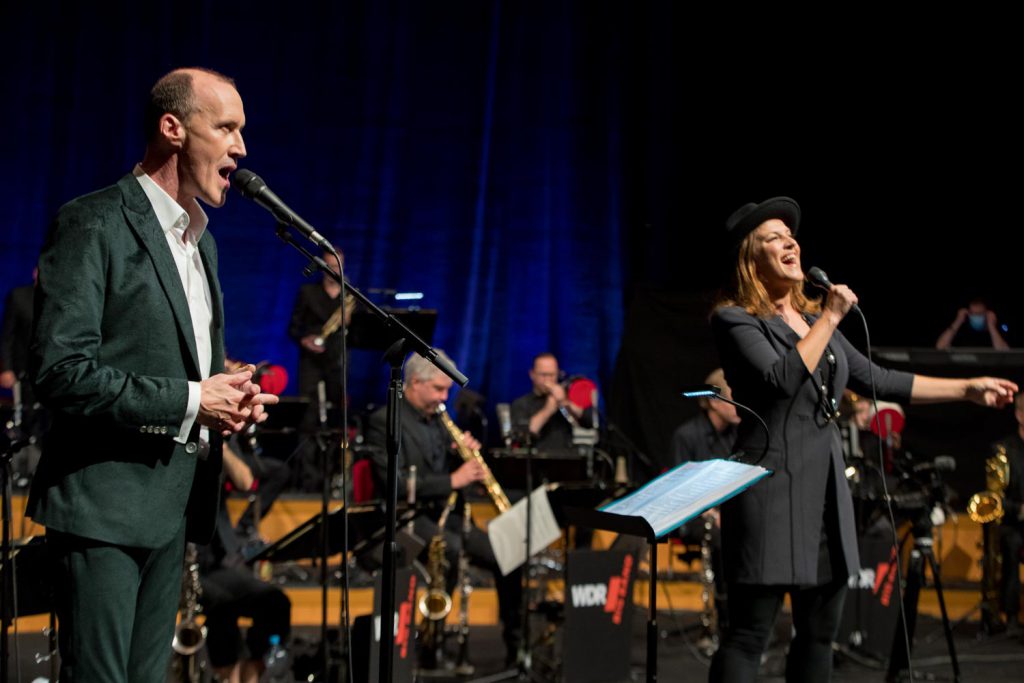 When asked to describe those meanings and levels, the vocalists shared a moment of contemplation. “It’s important, right now, to bring beauty and joy into the world,” Claassen said. Linx expanded the thought: “The album and tonight’s show are about hope, experience, and the need to appreciate what we have – whatever happens.”

Outside the Philharmonie, the first orange leaves of autumn skittered across the pavement. At a time of transition from locking down to opening up, the concert felt like part of a broader reaffirmation of the value of the arts for individuals and society. After such a challenging period, the singers still sing, the band still swings and the music still brings people together. Even if we have to stand three meters apart.

You can watch a recording of this concert on Facebook here. The album “And Still We Sing” is now available on CD, vinyl, and on all streaming and download platforms.