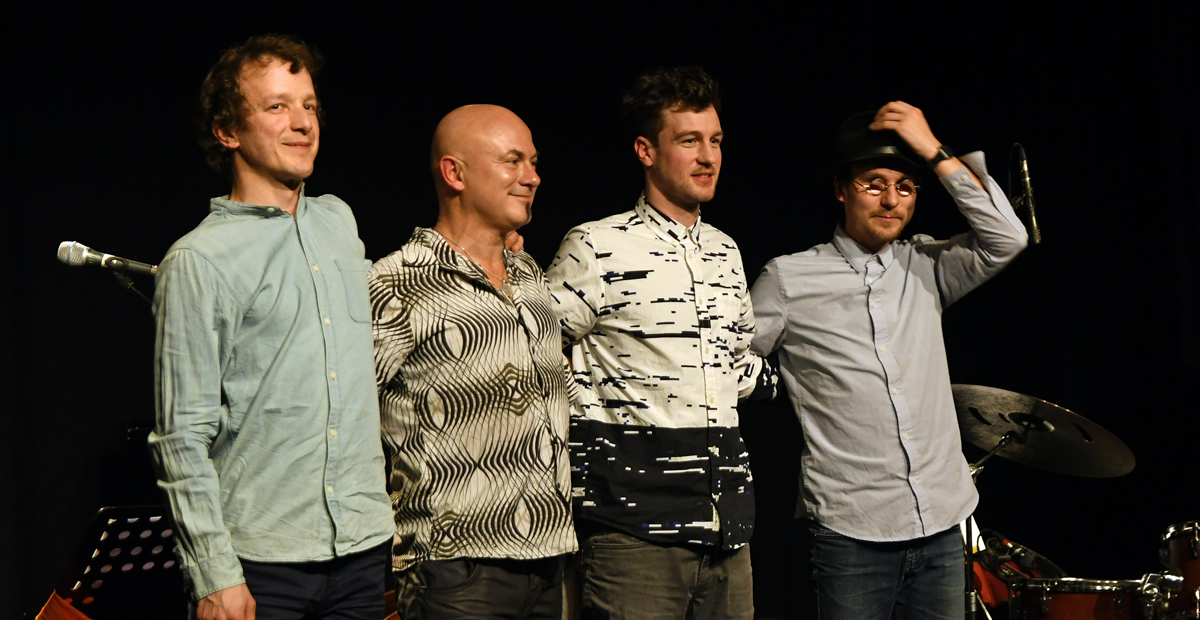 “Nighttrain” is the latest project from German based guitarist Frank Kaiser. Having led many projects over his long career, this new project under the apt title “Kaisers New World” sees Frank debut with a new quartet featuring Valentin Butt on bayan, the Russian variant of the accordion, together with Hans Otto on drums and Lukas Growe on double bass. Nighttrain will be available on the 24th of February 2023 on CD and all streaming platforms with the 180g Vinyl edition scheduled for release latter in the spring.

Having grown up in rural German province of Thuringia, Kaiser, on the one hand is influenced by nature while on the other hand by the world of spirituality and intellect. Speaking to Franks music, the musicologist Dr. Adrian Kleinlosen of the University of California describes it as follows: “Frank Kaiser’s music is often polyphonic; the individual voices sometimes act independently of each other or intertwine in such a way that they combine to form a complex structure. This is where Kaiser’s music differs from a lot of other jazz music.” Kaiser himself describes his music as a “playground for adults”, and this image becomes clear immediately upon hearing his work. Kaiser’s sound oscillates in a combination of jazz, groove and world music, where new elements are constantly emerging. In Franks own words, he speaks about the development of the project.

“There is a fascinating interplay or togetherness in my music, it’s like a playground for adults, both for the person who plays it and for the listener – it gives the individual space, it fills me up, makes me happy but at times it leaves questions unanswered that leave me feeling alone, polarized. It’s always evolving, never going out of style.

“In recent years, new compositions have emerged, which I wanted to give a new sound to. So in 2019 I looked for a new band with incredibly great colleagues. I found what I was looking for in 2 wild youngsters from the Leipzig University: Hans Otto on drums and Lukas Growe on double bass. Also I was looking for another chord instrument, one that wasn’t an A-Typical classic jazz instrument in that sense. I thought of accordion, Bajan (the Russian variant of the accordion) or even bandoneon, to squeeze out new facets to the sound and spice up or sweeten something with touch of world music that will perhaps appeal to those who weren’t jazz fans before. The search for the right player was difficult, but in the end I was lucky in Valentin Butt from Berlin, who plays in bands such as “Holler My Dear”, “Skazka”, but also guest appearances with Ute Lemper and at the Hamburg International Chamber Music Festival in the Elbphilharmonie gave.” 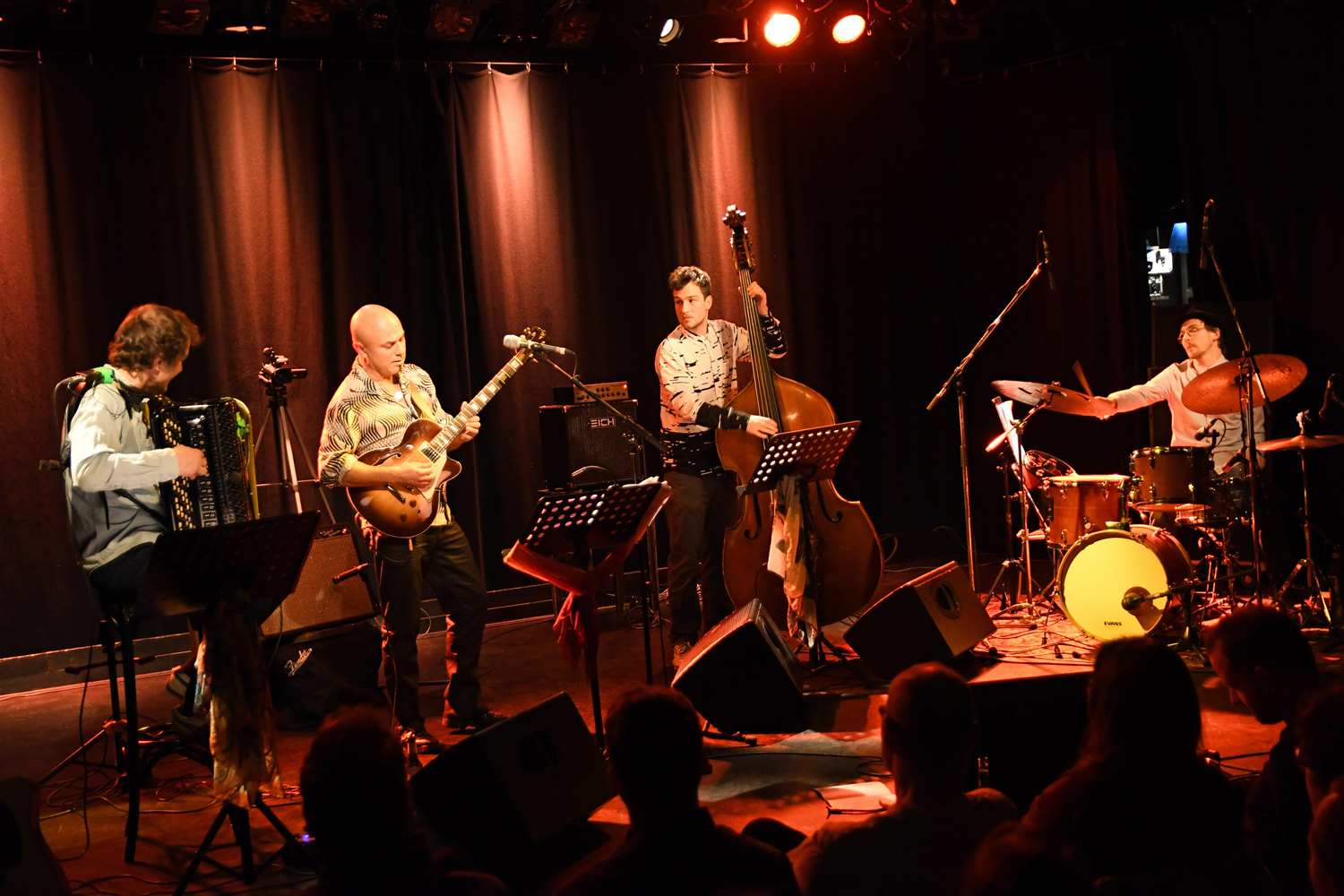 For those unaware, the relationship between a musician and their instrument is rather unique. It’s often a never-ending quest to find that one prefect instrument that fit’s there style. Guitarists are possibility the most extreem here and Frank is no exception. In true guitar geek fashion, Frank continued. “With a new sound came a new guitar. The Leipzig master guitar builder Matthias Voigt built me a semi-acoustic guitar made of Cedar body and neck, a beautiful 70-year-old spruce top and rosewood fingerboard according to my ideas. The guitar has an unbelievable sustain, a naturalness and delicacy in tone that is second to none. I’m very happy about that. Every day I play it, it evolves and sounds better.”

Frank premiered the new ensemble live in January 2020, just before the pandemic shut down the music world, at the “naTo” club Leipzig. Despite the ravages of the pandemic, the band was able to play a number of concerts at Horns Erben Leipzig, Terzo Mondo Berlin, LeipJazzig@Schilletheater and in autumn 2021 a small tour around the Akut Accordion Festival in Halle. In 2022 there were concerts in Berlin, Leipzig, Chemnitz and “culture on the raft” in Lychen. With enough live petri dishes to grow the repertoire, in September 2022 with the support of Initiative Musik, they produced an album at the Bonello Studios in Berlin. This album is now set for release on the 24th of February 2023 with two singles dropping on streaming platforms on the 13th of February and on the 10th of February. Below is the video for the first single titled 1001.

The albums title track “Nighttrain” begins with the sound of a moving train and with the rhythmic sound of axles and wheels developing seamlessly into a shuffle groove, laid on the rails by the rhythm section. It’s dark outside, you could be nowhere or anywhere, only the lights from inside the train are reflected on the window pane and no one knows what time it actually is. The song Nighttrain was composed during the pandemic when work often went late into the night and was coupled with the longing to once again embark on a journey, a longing that seeps through every gap in your being. How palpable that feeling becomes upon listening. this is one of the album’s strengths and exactly what is meant by storytelling through sound.

As a soloist, Frank Kaiser demonstrates a keen sense for narrative arcs. The compositions and improvisation on “Nighttrain” are characterized by dynamic ebbs and flow. Often the guitar will raise its voice, only to switch to a quieter register in the following moment, entrusting the listener with a secret. In action-packed passages, the solos often swell like the strained scream of a blues singer, such as in “Black Mustang”, where the overall sound is somewhat edgier. Elsewhere, Frank’s guitar playing tells of the breadth of imagination contained within the lyrical melodies. For example in “Septomania”, an imaginative homage to a tense situation, or in Wellen, where the waters surface tension ripples polyphonically.

In addition to the guitar, the accordion on “Nighttrain” stands out as a vital element within the quartets sound. Valentin Butt, who originally hails from Saint Petersburg and now lives in Berlin, is a virtuoso with a powerful, multifaceted sound. The sound of his Bayan, the Russian variant of the accordion, fits in perfectly within the ensemble of drums, double bass and electric guitar. In groove-heavy passages, such as in “Black Mustang” the instrument takes the place of a Hammond organ. At times, Butt and his instrument evoke the soundscape of world music and even a taste of the French chanson unfolds. There are also moments on the album that will transport you into a dimly lit cellar, where dry red wine flows and smoking cigarettes is still considered good form.

Unmissable on the album is the contribution of Hans Otto on drums and Lukas Growe on double bass. In the albums liner notes the two are described as being like “the old friend who always calls out of nowhere when the need to talk is greatest.” In the track “100 Possibilities”, with its complex harmonies and modulations, these two players hold things tightly in the pocket. In “1001” they interpret the time with more flexibility in order to perfectly illuminate the soloists at the front of the stage. Also on this track, Polish artist Karolina Trybala has a guest appearance as the personified Scheherazade and ensnares you with her spoken word contribution in her native language. All in all, Nighttrain is a strong debut for “Kaisers New World” highlighting the intense ensemble work of these four musicians.

Nighttrain will be available on the 24th of February 2023 on CD and all streaming platforms with the 180g Vinyl edition scheduled for release latter in the spring.

Kaisers New World will be touring to support the release. Current dates are listed below, with further dates to be announced soon.

More information can be found at www.kaisermusic.de