Readers of Jazz In Europe will in no doubt know Fiona Ross who has been one of our senior writers for a number of years. Although well known as a writer Fiona is also a highly accomplished jazz vocalist and educator.

To that end, on the 6th of October Fiona will launch her 5th album titled “Red Flags and High Heels” at London’s PizzaExpress. If you would like more information on the album, former Jazz In Europe editor Nigel J recently reviewed the album. You can read the review here. 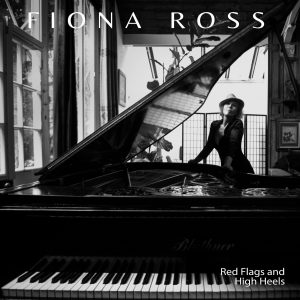 Named among the 100 Alternative Power Music List for 2020, Fiona Ross first came to the world’s attention as “The artist that gave Ed Sheeran his ‘first push'” (Daily Express), but has very quickly established herself as an artist in her own right and has received incredible reviews across the globe for all of her albums. Her live performances have seen her perform at prestigious venues (606 Club, Pizza Express, Bulls Head, Nells Jazz and Blues, Toulouse Lautrec) and her music is played on radio stations all over the world.

Fiona has achieved many accolades, including Best Jazz Song from the World Songwriting Awards for her song ‘For My Dad’, Outstanding achievement awarded by the Global Music Awards and most recently International female songwriter of the year from the International Singer Songwriters Association. She has been featured in many publications including Tinnitist, Jazziz, Record World Magazine, Jazz Corner, Ink 19 and Jazz Quarterly and was thrilled to be in the top ten of most played videos recently in Tinnitist. Fiona’s song ‘Mistress’ which was recorded live in a stairwell, was selected to be included in the British Library archives for prosperity.

Fiona attended the prestigious Arts Educational School where Julie Andrews, Catherine Zeta Jones and Will Young, to name just a few, also trained. Fiona’s career has taken her all over the musical map. She has worked as a musical director, session musician, composer, choreographer, director, dancer, actor, model and even sang back-up for a rock and roll band called Rocking Willie and the Y-Fronts when she was 15. Enrolled in dance, drama and singing lessons at the age of two, piano at age six. By the age of eight years old Fiona was starring in London’s West End. At the age of fourteen she lied about her age and talked her way into gigging on weekends in jazz clubs throughout London, from the classy nightspots of the elite to some rather seedy pubs that were no place for an ordinary teenager.