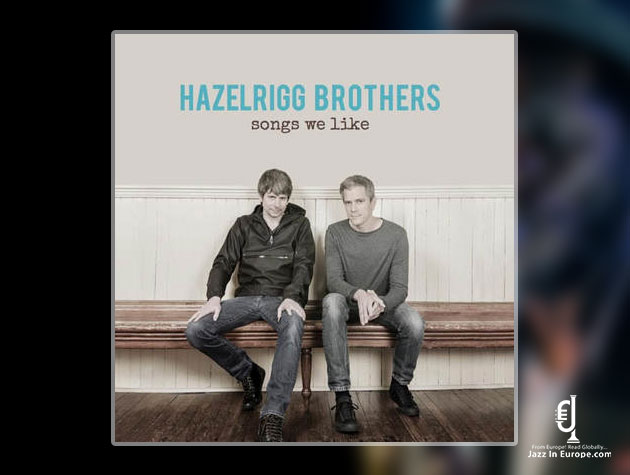 Every now and then something surprising pops into your in-box that makes you sit back and say WOW – where did that come from! Last week I had this experience when a friend sent me an album from a group I’d never heard of. While that in it’s self is not surprising, here at Jazz In Europe we receive submissions each day from artists were not familiar with. What was surprising is the music contained on the album.

The Hazelrigg Brothers George and Geoff have been making music together for many years. Well versed in Classical, Early Music and Jazz, both brothers cross many genre boundaries and this can be heard in their approach to this album.

The Press release accompanying the album opened with the following:

“… it wasn’t until recently that the New Jersey-born siblings were certain that all of the elements they required were in place to cut an album of their own.”

This statement eludes to the “perfectionism” one hears on this album. The press release goes on in detail about the process the brothers went through to prepare for the recording both technically and musically. Geoff Hazelrigg, cites the jazz trio’s drummer, John O’Reilly Jr., as one reason the timing was right for a Hazelrigg Brothers album. “Until John, we really couldn’t find a drummer who could understand what we needed from that chair, and who was willing to adapt and evolve with what we were doing.”

Speaking of Perfectionism, another factor impacting on this album is the fact the Brothers are also the proprietors of Hazelrigg Industries, a company that manufactures high-end studio audio equipment. The press release goes on to say:

The brothers… held out until they’d developed the ideal recording situation in their own home studio. “We were struggling with the engineering part,” George says. “We didn’t feel that we were adequately capturing what was really happening in the room. It took years of trial-and-error before we came up with our current engineering techniques.”

Given the exceptional quality of sound on this album I can only say it was worth the wait.

The album is titled “Songs We Like” and includes treatments of songs that have personal meaning to the Brothers. While the concept of taking repertoire from other genre’s and re-imagining it as jazz is nothing new, it’s the approach to the repertoire chosen by the trio that makes this album in my mind unique.

Most of the tracks on the album are quite short, compared to the majority of jazz albums, with only one track reaching over the 5 minute mark. The arrangements are quite unique, and at times unconventional. Building on the legacy of Ahmad Jamal, it’s often difficult to ascertain where the arrangements stop and the improvisation begins. I don’t at all mean this in a negative way, the entire album is truly fascinating and keeps the listener on his or her toes for the entire program. Throughout the album, improvisational sections are interspersed with arranged passages resulting in the situation where the whole is greater than the sum of the parts.

This album is tight and highly polished, I’m convinced DNA plays a roll here as both brothers appear to function as one finely tuned machine complimented by the superb playing of drummer, John O’Reilly Jr.

This video of “Miss Gradenko” was recorded in 2015. While not on this album, the video provides an impression of the the Hazzelrigg Brothers at work in the studio.

The Album opens with a rendition of Jethro Tull’s “Living in the past”. Opening with a percussive bass and drum intro it’s not until the piano enters that you can recognize what you are hearing. Apart form the thematic material this version bears little resemblance with Ian Andersons original however is the perfect album opener setting the scene for the rest of the program.

Based around a “Poinciana Grove”, Men at Work’s “Catch a Star” reflects well on the original semi-reggae grove. I enjoyed the way this track develops, after first exploring the theme the trio expands the motifs constantly adding more movement until the track abruptly ends without returning to the theme, brilliant!

Béla Bartók’s “Evening in the Country” is given a surprising treatment however does not stray all that far from the original manuscript. In this rendition it’s the addition of the bass and drums that adds the extra dimension emphasizing the Hungarian folk roots of Bartók’s composition.

One of the high points on the album is Hendrix’s “If 6 was 9”. The track looses some of the original’s “acid-fueled” blues edge but in return we get a far more soulful version that makes you want to grab your Harley and hit the road (ed: The original Hendrix track was used on the soundtrack for the movie “Easy Rider”). The track features a well constructed bass solo followed by a rather frantic piano solo that slips seamlessly into a drum solo that forms the outro to the track.

Steely Dan’s “King of the World” opens with pianist George Hazelrigg playing the original bass line as left hand power chords while Geoff takes the melody on the bass before the track opens up for solo’s. The second Jethro Tull track (and album closer) “What is and What Should Never Be” is given a soulful treatment with some nice arco passages from bassist Geoff Hazelrigg.

Given that both brothers have a background in early music it’s not surprising to find a track based on the Johann Caspar Ferdinand Fischer’s Passacaglia (da Urania). George Hazelrigg is an accomplished Harpsichord player well versed in the art of continuo playing while Geoff Hazelrigg list’s the Viola da Gamba as part of his musical arsenal. I believe this track to be the least successful track of the set however, on the other hand, it’s hard to convince a purist.

The performances on the album are flawless and the recording quality is Stella to say the least. The mix is transparent and the stereo balance spot on,  as the listener you feel like you have pride of place in the room.

A quick Google search will show a list of reviews of this album in the U.S. jazz press, however here in Europe the Hazelrigg brothers remain in the “Witness Protection Program” –  I hope this album will change this. The Hazelrigg Brothers together with drummer John O’Reilly Jr form an innovative Piano Trio that, as mentioned above, takes the legacy of Ahmad Jamal’s vision of the piano trio and moves it to a whole new level. I enjoyed every minute of this album, like a fine Single Malt Whiskey, it deserves to be savored over and over again.

I can’t recommend this album highly enough and I hope to see the Hazzelrigg brothers live on the European stage’s sooner rather than later.

Track Listing:
Living In The Past; Catch A Star; If 6 Was 9; Evening In The Country; Ten Years Gone; King Of The World; Passacaglia, From Daughters of Zeus, Urania; Spirits In The Material World; What Is And What Should Never Be.

Title: Songs We Like
Year Released: 2017
Label: Self Produced