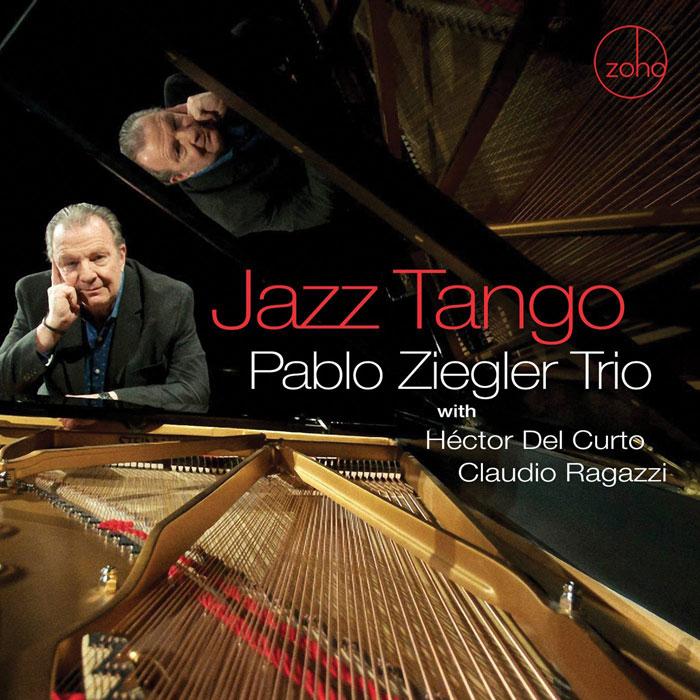 Jazz Tango is the latest marvelous album by Latin GRAMMY Award winning composer, arranger, and virtuoso pianist Pablo Ziegler, who is the world’s foremost practitioner and exponent of the Nuevo Tango musical form, having learned its mysteries and nuances from the source. In the 1950s, the legendary Astor Piazzolla began infusing the firmly entrenched, classic tango style of the day with new harmonic and melodic sensibilities, as well as incorporating modern instruments into the traditional tango ensemble, and thus was gradually born what became known as Nuevo Tango.

In 1978, the maestro hired fellow Argentinian Ziegler as his regular pianist, who picked up the Nuevo Tango torch when Piazzolla retired eleven years later and has carried it without abandon ever since, while at the same time contemporizing the genre by adding his own jazz and improvisational touches. While Ziegler may have started his career as one of Piazolla’s acolytes, he has become one of the leading lights of this art from – a veritable grandmaster. Quite simply, there is nobody like Ziegler. He is in a league by himself.

As a pianist, Ziegler’s unique style and broad range have led to comparisons with the disparate likes of Vladimir Horowitz and Bill Evans—no surprise given that Ziegler began creating colorful jazz arrangements for classical music when he was only eighteen. You can hear the classical influence quite clearly in all of his work, though in keeping with the rhythmic requirements of Nuevo Tango, he just as clearly plays the piano like the percussion instrument that it is. That he can navigate the classical and jazz worlds so seamlessly is a demonstration of how Ziegler is able to absorb material from multiple sources and create something wholly new.

Ziegler has continuously explored the musical contours of traditional, Nuevo, and Neo tango forms, recording and touring internationally with his own duo, trio, quartet, and quintet ensembles. He has performed this type of music in almost every conceivable format, combination, and permutation. Suffice it to say that there is nobody on the planet more artistically attuned to tango as a musical style than Pablo Ziegler, and this live trio album, featuring Hector Del Curto on the bandoneon—the accordion variant made famous by Piazzolla—and Claudio Ragazzi on guitar, reveals the many faces of the genre in exquisite detail.

Ziegler has raised the bar once again with this album, with his own genre-defining compositions and fresh renditions of familiar classics. No doubt, it’s a joy to listen!